Reports say there have been clashes in Camp Ashraf as Iraqi police attempted to inspect the belongings of the sixth batch of terrorist Mujahedin-e Khalq group.

According to a report published by Habilian Association website, a well-informed source told 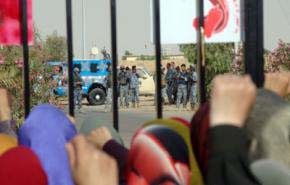 Arabic language Buratha news agency that members of the anti-Iran terrorist Mujahedin-e Khalq group attacked Iraqi security forces with knives and truncheons yesterday in a bid to prevent them from examining their belongings.

To date, roughly two-thirds of MKO members have been relocated to Camp Liberty in five groups of 400; however, some 1200 of them still remain at Ashraf. Another group of 400 were due to be transferred yesterday, but the conflict hindered the move.

Iraq is committed to temporarily transfer members of anti-Iran MKO from Camp Ashraf to a former U.S. military base, Camp Liberty, for the UNHCR to determine their refugee status.

The Iraqi source said that the yesterday’s clash was due to the inspection of Ashraf residents’ belongings by Iraqi police.

In a statement released Saturday, the terrorist group claimed Iraqi government was obstructing the transfer of the sixth batch of its members from Camp Ashraf to Liberty by “preventing the transfer of many items including water air-conditioners, water heaters, kerosene heaters, maintenance tools and generators;” however, the Iraqi source revealed that the thorough inspection of the MKO belongings resulted in finding some materials for military purposes which they were aimed at transferring to Camp Liberty.