A former American official says the removal of the Mujahedin-e Khalq Organization (MKO) from the US’s blacklist of terrorist organizations was a “terrible move [by Washington] in all respects.” 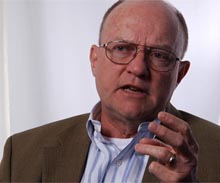 Wilkerson, who served as the chief of staff to former US Secretary of State Colin Powell, stressed that despite the US measure to remove the group from its blacklist, the MKO is “still a terrorist group.”

On September 28, Washington formally removed the MKO from its list of terror organizations one week after US Secretary of State Hillary Clinton sent the US Congress a classified communication about the move.

The MKO is responsible for numerous acts of terror and violence against Iranian civilians and officials.

In September, Iranian Judiciary Chief Ayatollah Sadeq Amoli Larijani said the terrorist group was responsible for the murder of over 17,000 Iranians.

The group also cooperated with the executed Iraqi dictator Saddam in the massacres of Iraqi Kurds and in suppressing the 1991 uprisings in southern Iraq.