truth” for the well-being of their followers. In this way, they apply various bizarre practices to blind the followers from observing the reality of maltreatments against them. In the cult, they are constantly kept under a sever mind control manipulative system that they cannot see their leaders abusive acts.

Once the member defects from the cult whether mentally or both mentally and physically, he realizes what has gone to him during the period of his engagement with the cult. He seriously gets motivated to denounce the cult and its leaders.

The majority of former members of the cult of Rajavi (the Mujahedin Khalq Organization/ the MKO/ MEK) are determined to reveal what they once thought as normal in the cult because of the responsibility they feel regarding the threat of the cult for both their former friends in the MKO and the humane community. Overwhelmed with feeling of anger and vengeance against Massoud and Maryam Rajavi, defectors of the MKO can help keeping silent over the human rights abuses they witnessed in the cult. Unsurprisingly, they are labeled by the cult as “agent of the Iranian regime” which is according to Mrs. Ann Singleton (a defector of the cult) a “one size fits all used to designate the victims” of the MKO [1]

The report is characterized by its mixture of allegation, assertion and allusion, much of which is not substantiated by evidence. The report blends fact and fiction in a manner intended to deceive and mislead. As such, this document is not an attack, it is a defensive act, it is a play on words intended to prevent informed discussion and stop important people being listened to. Indeed, the gratuitous mention of two specific individuals, Anne Singleton and Massoud Khodabandeh, who have consistently exposed the aspects of the Mojahedin Khalq which it most wants to hide – cult nature, human rights violations, mercenary relation to foreign agents – is the strongest possible indication of the provenance of this report.
The other indication is that the source of this specific misinformation is Rabbi Daniel M. Zucker. In a footnote the article “Disinformation Campaign in Overdrive: Iran’s VEVAK in High-Gear” is sourced at Global Politician, September 3, 2007, http://www.globalpolitician.com/23386-vevak-iran (accessed April 17, 2012). Interestingly, this website can no longer be accessed. [2]

However, the whole deceitful report –which was highly propagandized by the MKO – did not disturb the Khodabandehs. On January17, a few days after the report published Massoud Khodabandeh posted this status on his face book profile:

“I told my Mum that the Khodabandeh family was being attacked by the MEK in Washington and that she had been mentioned too. She said – I’m sure you three are more than enough for Rajavi and his cult, but if not, I’ll be happy to personally sort out Rajavi.”

For defectors denunciation of the violence committed in the MKO is kind of delightful job that helps enlighten the world community and release of their ex-comrades.

Ann singleton was among the first defectors to write about her experience with Rajavi’s Cult. She is the author of a book titled “Saddam’s Private Army”[3]. This is a sentence the review of the book published by Amazon.com:

”Told by a western woman who for twenty years had unique access to the secret inner world of the Mojahedin.”[4]

As you read on the book cover, "Saddam’s Private Army” gives a very detailed account and analysis on “How Rajavi changed Iran’s Mojahedin from armed revolutionaries to an armed cult."[5]

Regarding recently published testimonies of female former members about sexual abuse and women’s rights violations in the cult of Rajavi, Singleton’s book is perhaps the first document on the corrupt world created by Maryam and Massoud Rajavi. Singleton describes how Maryam’s ambitions lead her to promote herself in the MKO until she becomes Rajavi’s “personal assistant”. In 1984, Massoud who had been married to Firouzeh Banisadr – daughter of his then ally — divorced from her,” in this respect it is widely believed that she began a sexual relationship with Rajavi even before he divorced from Firouzeh in 1984. Singleton writes, ”She had been appointed head of Rajavi’s office and she worked closely with him in his office often not returning home at night for days. Before their marriage on 8th February 1985 Maryam hadn’t returned home to her husband Abrishamchi for several months. In this time. She had also attended a hospital in Paris for what is believed to have been a termination of pregnancy.”[6]

It took us just a few years more to learn about further violations of human rights in the MKO. Batoul Soltani, is a former member of the MKO’s so-called elite called “Leadership Council”. She bravely revealed horrifying facts about sexual abuse by Massoud Rajavi although she said that recalling those memoires is “awfully difficult” for her.[7]

Mrs. Soltani exposed a cultic ceremony in the MKO, called “Salvation Dance” (nude dancing) in which women of the “Leadership Council” were made remove their clothes in front of Massoud Rajavi and dance before him.”Get close to Massoud and unite with him”, Maryam said to dancing women.[8]

The former member of the Mojahedin Leadership Council added “They had portrayed the issue of having [sexual] relations with Massoud Rajavi in such a way that it appeared to us as the most sacred task. Mas’ud Rajavi also used verses from the Koran to justify his behavior.”[9]

A few months ago, Soltani together with two other former members, Zahra Mirbaqeri and Nasrin Ebrahimi once again denounced the MKO by receiving a list of 100 female members of the group who have gone under hysterectomy to be sexually abused by the Cult leader, Massoud Rajavi.[10]

Nasrin Ebrahimi had previously revealed that Rajavi had entitled the operation to remove women’s womb as “Summit”[11] referring to women’s extreme devotion to their leader. They lose their final sign of sexuality and motherhood, or as Mrs. Singleton says” to neutralize their sexuality”.[12]

Mir Baqeri said that the surgical operations were carried out to take out the victims’ wombs so that they would not be pregnant after being raped by Rajavi.[13]

Women of the Leadership Council were given a necklace on which Massoud’s portrait was graved earlier than they were made married with him. Zahra Mir Baqeri has one of the necklaces to show those who are concerned.

“Maryam Rajavi invented rituals such as being washed by other women members so as to ‘spiritually purify’ them, followed by the instruction to dance naked before both the Rajavis to prove they had ‘broken the physical and mental barriers’ to their total submission to Massoud. After these coercive practices, he would choose a bedmate for sex. The women have said that they did not agree to sex with Rajavi out of free will but because they had been coerced through deception into submitting to what they later came to recognize as rape.”, Ann singleton notifies.[14]

As she suggests:
“The facts are easily verifiable. The physical evidence of hysterectomy can be found in the women’s bodies. It is a matter of fact, not opinion. And if those who managed to escape the cult have evidence consistent with their accusations, does it not behove those people actually responsible for their welfare to conduct an investigation into the condition of the other named women in the MEK who are trapped incommunicado in (the ironically named) Camp Liberty.”[15]

There may be a much longer list of abuses committed in the Cult of Rajavi, as some of them were already reported by Human Rights Watch in 2005. This is what terribly disturbs the leaders of the MKO. To defend themselves they have no way except using their old tactic, labeling them “agent of regime”. Such reaction cheers defectors up as they see that they’ve been successful to bug the cult leaders. 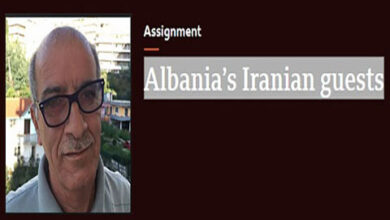 Diary Of An MKO Rent-A-Crowd Demonstrator