Iraqi Justice Minister: Saddam used MKO mercenaries to suppress Iraqi people but we don’t address them out of revenge 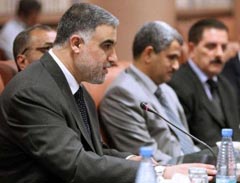 Iran’s Mehr news agency today reported that “the Minister of Justice Morteza Bakhtiari, announced during their meeting that four memoranda of understanding with the Iraqi side had been signed. The first three memoranda of understanding, on judicial cooperation in civil affairs and human rights, on judicial cooperation in criminal cases, and the extradition and transfer of convicts, as approved by parliament, and a fourth memorandum of understanding covering the transfer of convicts which remained, awaiting authentication by the Islamic Shura Council.”

Bakhtiari pointed out that during the past year, 40 memoranda of understanding and close cooperation have been agreed with the Iraqi government.

For his part, the Iraqi Minister of Justice said, “We have a special view of the Mojahedin. Saddam used them to suppress the uprising of the Iraqi people, and after the fall of Saddam, the organization continued its provocative practices. Even so, we do not address them out of revenge, and our actions are completely legal.”