The idea of fomenting ethnic tensions in Iran as a means to destabilize the country is not a new one. 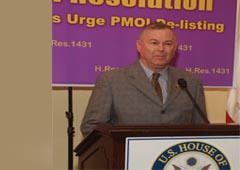 Rohrabacher, Chairman of the House Foreign Affairs Subcommittee on Oversight and Investigation, has never been shy about promoting ethnic separatism and supporting violent groups as a way to pressure Iran. In addition to his support for groups like Mujahedin-e Khalq (MEK), he has championed resolutions promoting Azeri and Balochi ethnic separatism in Iran.

His new resolution, H.Res.183, would push the Broadcasting Board of Governors to beam news broadcasts in Azeri and Baloch languages into Iran and its border regions with Pakistan to promote ethnic tensions.

Rohrabacher’s intentions are clear. Last year he sent a letter to Secretary of State Hillary Clinton in which he stated that, “Aiding the legitimate aspirations of the Azeri people for independence is a worthy cause in and of itself. Yet, it also poses a greater danger to the Iranian tyrants than the threat of bombing its underground nuclear research bunkers.”

According to reports, the intended purpose of this letter was to capitalize on the opportunity provided by news stories at the time concerning a budding military cooperation between Israel and the Azerbaijan Republic. “It would be wise for the United States to encourage such cooperation, as the aggressive dictatorship in Tehran is our enemy as well as theirs,” Rohrabacher wrote to Clinton.

He is also one of the top supporters of the MEK, and detractor of the Green Movement. He was a major driver of the effort to remove the mujaheddin from the terror list, while acknowledging their use of violence to achieve political goals. “I will have to admit, the thing that attracts me to this movement is that it is willing to fight,” Rohrabacher said ahead of the MEK’s delisting. “It won’t just be pacifists."

There are other violent movements, such as the Sunni militant Jundallah – designated in 2010 as a Foreign Terrorism Organization by the United States – which will undoubtedly benefit from this type of continued effort Rohrabacher is championing to foment ethnic tensions in Iran, particularly in the volatile Sistan-Baluchistan regions bordering Pakistan, which is the intended purpose of Congressman Rohrabacher’s latest resolution.

It should also be noted that Mr. Rohrabacher does not fail to mention, as an added incentive to support H.Res.183, the vast natural resources and the strategic importance of the border region between Iran and Pakistan. “Whereas it is believed the area inhabited by the Baloch people holds a large reserve of oil, natural gas, gold, and other minerals and comprises 1,000 miles of strategically significant coast line from the Persian Gulf and along the Arabian Sea.”