The war over war with Iran has many battlefronts. Inside Washington, the battle line is between a small coalition of peace and security, non-proliferation and religious groups opposing war and favoring a peaceful solution to the 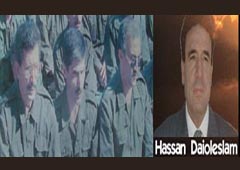 stand off with Iran, and a well-funded war machine comprising neoconservative organizations who believe war with Iran should have started years ago.

A central organization within the anti-war coalition is the National Iranian American Council (NIAC), the largest Iranian-American grassroots organization. NIAC has been at the forefront of opposing war, favoring diplomacy and opposing broad sanctions that only hurt the Iranian people, while, at the same time, rebuking Tehran’s horrible human rights record.

With its access to the White House, State Department and media, NIAC has increasingly troubled the war crowd, so much so that it has become one of their favorite targets.

Its leading attack dog, Seyyed Hassan Daioleslam [MEK agent in Washington] put it like this in an internal email: “destroying” NIAC and its President Trita Parsi “is an integral part of any attack on (former Secretary of State Hillary) Clinton and President Obama.” In other words, destroying NIAC would also destroy the administration’s policy of avoiding war with Iran.

Daioleslam has engaged in a massive defamation campaign accusing NIAC of being the lobby of the Islamic Republic of Iran — a ludicrous accusation considering NIAC’s unambiguous support for the Iranian pro-democracy movement but one that would rightly destroy the organization if proven true.

NIAC responded, as it had to, by taking Daioleslam to court for defamation.

No doubt, NIAC knew that in suing Daioeslam, it was fighting a David vs. Goliath battle, since the laws are stacked against anyone suing for defamation in the U.S.

But it was worse than that. Not only were the laws stacked against it, NIAC was also significantly outspent because the neoconservatives decided to go all out to deal a death blow to the anti-war forces. In fact, the well-financed anti-Muslim, pro-war and anti-Obama activist Daniel Pipes stepped in to support Daioleslam through the legal arm of his organization, the Middle East Forum. Pipes got Daioleslam a top-notch legal team headed by George Bush’s former White House lawyer Bradford Berenson of Sidley Austin, the sixth largest law firm in the world.

At first, Daioleslam’s court room argument was that his statements were accurate and that NIAC should be compelled to open its books so that the veracity of his claim of NIAC’s control by Tehran could be assessed. NIAC complied and Daioleslam’s high-powered legal team went through thousands of emails, documents and calendar entries.

However, to their great frustration, they couldn’t find a shred of evidence supporting Daioleslam’s claims. Instead, the documents revealed a very simple truth: NIAC is an independent grassroots organization supported by the Iranian American community, and which, engages with all parties to the conflict including the U.S., Iranian and Israeli governments.

Failing to prove his main contention, Daioleslam retreated from the assertion that NIAC was the Islamic Republic’s lobby. This was a huge victory for NIAC and, if the lawsuit had been filed in any other country, the conclusion would have been: Daioleslam lost, NIAC won.

But in the U.S., the plaintiffs (in this case, NIAC) have to go one step beyond proving that they were defamed. Plaintiffs also have to prove that the other side had acted with malice. So NIAC had to prove that Daioleslam knew that he was lying — a tall order under all circumstances. And convincing the very conservative, Bush appointed Judge John Bates — the same judge that got Dick Cheney off the hook in the Valerie Plame case — that Daioleslam acted with malice was probably impossible.

NIAC could not pull that off and the judge responded by shifting some of the legal “discovery” costs ($184,000) from Daioleslam to NIAC. But that was Daioleslam’s only victory.

Not only was the claim that NIAC is a foreign lobby shattered but Daniel Pipes and other neoconservatives had spent considerably more than $184,000 on their efforts to destroy NIAC. They had hoped to shift a much larger chunk of those costs to NIAC to cripple it by emptying its coffers.

But NIAC succeeded in striking out the largest item on Daioleslam’s menu of requests, leaving NIAC with an $184,000 bill, an amount it is appealing. In short, Dailoeslam’s attack backfired, apparently leaving him (or Pipes) heavily in the hole. In fact, during a press call last week, Dailoeslam actually called on reporters to donate and help defray its costs!

So at the end of this five-year process, no evidence was found to substantiate the accusation that NIAC was lobbying for the Iranian regime; the objective of “destroying NIAC” has completely failed as the organization continues to be one of the most prominent voices on Iran policy in Washington; and the vast majority of the cost of the discovery process remains with the defendant and his neo-conservative backers.

Not a good day for the pro-war lobby, but a very good one for Americans who find the idea of being embroiled in a third Middle East war – so soon after Iraq and with our troops still in Afghanistan – utterly appalling.

M.J. Rosenberg is a Special Correspondent for The Washington Spectator. He was most recently a Foreign Policy fellow at Media Matters For America. Previously, he spent 15 years as a Senate and House aide. Early in his career he was editor of AIPAC’s newsletter Near East Report. From 1998-2009, he was director of policy at Israel Policy Forum. Follow him @MJayRosenberg and @WashSpec.