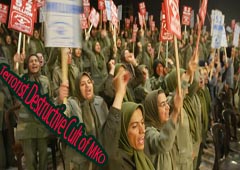 The mujahedin Khalq Organization (MKO) is a political organization with paramilitary structure. It was founded by Muhammad Hanif Nezhad in 1965. The MKO launched armed struggle against the Shah of Iran. However, it was harshly oppressed by the then Security and Intelligence Organization of Iran (Savak). The group leaders were sentenced to death under the order of Shah’s military court. They were accused of committing acts against national security and assassination of Iranian and American nationals. Some were executed and the others were imprisoned.

After the Islamic Revolution in 1979, the MKO could manage to recruit large number of people from different levels of society, under the leadership of Massoud Rajavi and Musa Khiabani. Many people were deceived to join the group and then they were not allowed to leave the organization any more. After the American invasion to Iraq in 2003 the group was disarmed and some of its member’s could endure ruthless efforts to escape the cult.

Ronak was tricked into the MKO when she was 15 years old and after bearing tough circumstance she could manage to escape the group’s camp and join the Red Cross. We briefly interviewed Ronak while she was visiting the 26the International Book Fair in Tehran.

– When and how did you join the MKO?

– After I finished middle school, I and my brother traveled to Turkey illegally. I was fifteen dreaming of going to European universities and my brother was seeking a job. My uncle who was an MKO supporter lived in Turkey. We left Iran in hope of going to Europe by the help of our uncle. My uncle said that we should have had passports in order to travel to Europe. We couldn’t go there illegally. He promised me that I would be sent to an Arabic country with a group and from there they would facilitate my trip to Europe. They sent me to Camp Ashraf before my brother was sent. When my brother found that I was sent to Iraq, he came to find me.

– Is your uncle still in MKO camp?

– My uncle distanced from the MKO and returned to Iran after he found out that all the organization had said was a conspiracy.

– How did you see Camp Ashraf when you arrived there?

– When I arrived in Camp Ashraf, I was shocked I got temporary dementia for four months.

– What did you think of Camp Ashraf as a military camp?

– I had left Iran in the love for Europe but I entered a military atmosphere. I was shocked due to extreme fear and anxiety. I was so heavily under pressure that I forgot everything. When I wanted to fill my biography form, I could not even remember my brother’s name until I gradually got familiar with the system rulling Ashraf and recalled my past.

– Did you have any contact with your family during that period of time?

– No, I had no contact with my family although I missed them a lot. This worsened my illness.

– And what about your brother?

–  I was allowed to visit my brother every six months under the supervision of commanders and my superiors.

– Tell us about your life in camp Ashraf what classes were you supposed to take?

– The new comers were taught the history and the activities of the MKO. There were also some classes for brainwashing; they emptied all we had in our mind, instead they indoctrinated their own ideas in our minds. We also received military training in Camp Ashraf.

After the American invasion to Iraq, some gaps had appeared in the MKO relations so the leaders held English, Arabic and music classes. Before that, classes were only ideological and political.

They said: if you get back to Iran, you’ll be killed

– Did the classes have any impact on you?

– No, it was all fear and panic. They tried to make us forget our family and free life but Iwe never quit, I never kept calm.

I was all the time busy fighting. They intimidated us that if we got back, we would be hurt or killed or imprisoned. We were told that no one would believe that we hadn’t go there with our own free will. I was really terrified.

– Were there many new recruits?

– During the time I was there, there were not so many new recruits. Not many women were recruited but the few people who were deceived were brought there from Turkey or Europe.

– How about your living conditions?

– Everything was like a military camp. Uniforms, not so pleasant food and extreme fatigue that did not let members think of anything else. When you went to bed you just fell asleep.

They told my mother: come get your daughter’s body

– How did you escape?

– After the Americans arrived, Camp Ashraf was disarmed and some of prisoners [members] ran away. My brother went to American Camp from where he tried to help me get released. When the MKO saw I was determined to leave the camp, they told my mother that I committed suicide so she had to come get my dead body. When my mother came, she asked to visit my brother and after they met, they couldn’t leave each other.  I was so scared that my Mom would get into trouble. They were likely to take my Mom as hostage in order to keep me in the group…

– Tell us about your feelings when you got back to home. What was your family’s reaction?

– I was so happy. It was like a dream. I could never get along with living in Camp Ashraf where I missed my loved ones and had no contact with them. [When I returned], I was under severe mental pressure because relatives used to ask me about what had happened to me in my trip to Europe. Most of them do not know about my experience in Iraq. They think that I went abroad to study but I couldn’t finish my studies because I missed my family!

– Didn’t you face any legal problem after your return to Iran?

– There is no legal problem. I just shouldn’t take jobs in security organizations.

– Do you still live with your love for Europe?

– No, when I got back to Iran, I continued my studies and I no more dreamed of Europe. My brother works with his car.

– I used to watch their satellite TV with feeling of hatred and anger. I felt pity for those people who were imprisoned there.

Friendly chatting was forbidden in the MKO

-Did you have friends there?

– It was Unimaginable. In the MKO, it was forbidden to chat with your friends. They held meetings in which we were allowed to talk but not together.

– How was the meeting?

– They treated in a way that we felt guilty. They questioned us. they told us words like:” You are the regime’s mercenary”!

– How was your relationship with commanders?

– Terrible. I was a problem for them because I thought about my family. They put me under severe pressure in order to obey them. I was emotionally injured while that time could be best time of my life. Now, I’m happy because I could get released from their prison. Of course I still suffer the emotional injuries of that period of time.

– Did they torture you?

– I was not tortured physically but I was tortured psychologically. Sometimes, you were kept in Bangal. It was like solitary confinement. The life in Bangals was terribly hard.

– It was a place located far away in the Camp. You were imprisoned in a Conex which was so terrifying. You always panicked that they would harm you there.

There were no marriages in Camp Ashraf? How about sexual problems?

Men and women were separated but women in the high ranks were made Rajavi’s wives. Others had no right.