the seven people who the MEK claim are missing from Camp Ashraf are in the custody of the Iraqis. Before this they had been on overdrive to claim that the 1st September attack on Camp Ashraf had been carried out by the government of Iraq. Both allegations have been repeatedly dismissed as completely unfounded by Iraq, but this has not silenced the MEK’s propaganda machine.

There is strong evidence that the aim of the attack on Camp Ashraf was to capture or kill Massoud Rajavi on the understanding he has been in hiding there. If that is the case, then the seven missing people, who have been identified as Rajavi’s close inner circle, have been part of a pre-planned manoeuvre to rescue him in the event of such an attack. The other members have been there to resist any incursion to allow Rajavi and his protectors time to run away.

Apparently inside the MEK there is currently an internal indoctrination message which compares the dead in this situation to the circumstances when Prophet Mohammad moved from Mecca to Medina and used Imam Ali who slept in his place as a decoy so that when they came to kill him they found Ali there instead. If this scenario is right then after Rajavi has saved his own skin from Ashraf, the last thing he wants is to be in the presence these seven known people. But he can’t let them go either because of the information they carry. The untenable MEK claim that these seven missing people were in Baghdad and have now been transferred by helicopter by the Prime Minister’s office to the south of Iraq indicates that there is some kind of plan behind it – governments do not work like this. The strongest possibility is that these seven people will be eliminated and the government of Iraq will be blamed. This is a typical MEK ploy to disguise the mysterious deaths of unwanted people, something they have done frequently.

In this case it is entirely possible that following this build up, these seven are discovered dead in the next few days, perhaps handcuffed and executed as the others were.

Certainly, for a man who basically can’t stop talking, the silence from Rajavi since the attack on Camp Ashraf makes it all the more likely that he is on the run and heading for a safe residence out of the country. 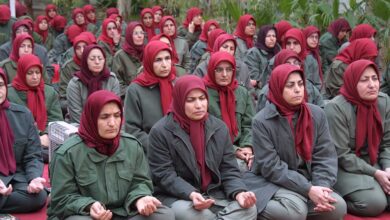