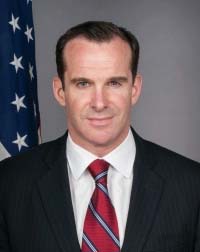 Nations Assistance Mission for Iraq (UNAMI). DAS McGurk met with senior representatives from the Mujahedine-e-Khalq (MEK), as well as officials from the United Nations High Commission for Refugees (UNHCR). He expressed his condolences to the survivors of the recent Camp Ashraf attack and emphasized the priority of the U.S. Government to ensure the safety and security of the residents of Camp Hurriya. He praised the efforts of UNAMI, and Mr. Busztin personally, to ensure the safe and secure relocation of the survivors from Camp Ashraf to Camp Hurriya last week.

He also discussed issues related to the safe, permanent, and secure relocation of the camp’s residents outside of Iraq, and affirmed the U.S. policy to take active measures in support of such relocation to third countries as soon as possible. DAS McGurk encouraged the residents to cooperate fully with the UNHCR process to facilitate their safe and permanent relocation outside of Iraq. Finally, he thanked UNAMI and UNHCR for their tireless efforts in Iraq and ensured the ongoing cooperation and support for their efforts by the United States.