The Khalq Organization is accustomed to fabricating lies and disseminating them, in this regard they alleged 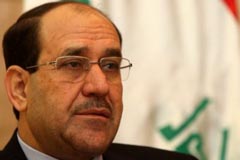 that seven of its members had been missing in the recent events that took place in the New Iraq camp, and claimed that they were abducted by Iraqi troops. As we reject these allegations altogether we reiterate the fact that the Iraqi forces has never conducted any actions against members of this organization, whether in the camp of New Iraq or any other site, but the elements of this organization, which is still on the list of terrorist organizations refused to allow Iraqi forces, which were protecting the camp, entering the camp at the time of the accident and impeded investigation efforts.

We would like to remind the international community of the Resettlement Agreement between the Iraqi government and the United Nations and their commitments to it, despite of making many extensions of the dates of the agreed schedule.