A Senior Iraqi lawmaker says the supporters of the terrorist Mujahedin-e Khalq Organization (MKO) must relocate the group’s members to their own countries. 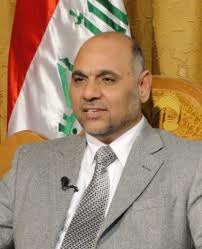 Abbas al-Bayati told Fars News Agency given the crimes committed by the MKO against the Iraqi people, the continuation of their presence in Iraq was unacceptable.

Referring to the support of a number of European states for the MKO, al-Bayati urged them to relocate the members of the terrorist group to their own countries.

The European Union removed the MKO from its list of terrorist organizations in 2009 after the group filed a petition against the blacklisting in 2008.

The Iraqi lawmaker noted there was no difference between the MKO and al-Qaeda or the terrorist group of “Islamic State of Iraq and the Levant (ISIL).

The MKO is not different from al-Qaeda and the ISIL and other terrorist groups that have killed the innocent people of Iraq, al-Bayati added.

He said some of the group’s members, who face prosecution for the crimes they have committed in several Iraqi cities, such as Karbala, Khanaqin and Tuz Khormato, must stand trial in the country’s courts.

The MKO fled to Iraq in the 1980s, where it received the support of executed Iraqi dictator Saddam Hussein and set up Camp Ashraf in the eastern province of Diyala, near the Iranian border.

The group also cooperated with Saddam in the massacres of Iraqi Kurds and in suppressing the 1991 uprisings in southern Iraq.

In December 2011, the United Nations and Baghdad agreed to relocate some 3,000 MKO members from Camp New Iraq (formerly known as Camp Ashraf) to Camp Liberty.

The last group of MKO terrorists was evicted by the Iraqi government on September 11 to join the other members of the terrorist group at Camp Liberty near Baghdad International Airport and await relocation to other countries.