An article published on the Mojahedin Khalq’s official website exposes the group’s affinity with the gruesome Islamic State of Iraq and the Levant (ISIS) in Iraq.

The first page of their site (see picture below) says in Farsi, “Revolutionary forces in Iraq have captured parts of Mosul after fighting with Maliki’s forces”. Referring to the Islamic State of Iraq and the Levant as “Revolutionary forces” is something the MEK have invented to demonstrate its solidarity with the group. The article goes on, “The revolutionaries have announced that Maliki’s forces have run away”, and quotes from ISIS itself, “we didn’t let anyone survive except those who surrendered to us”. According to the MEK, the ISIS statement goes on, “We inform all government forces they should surrender otherwise they will be killed” 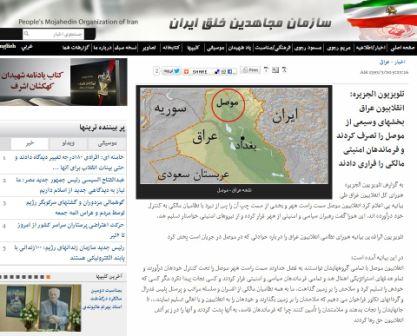 Saddam Hussein’s daughter in Jordan, with whom the MEK are in close collaboration, went further and thanked the Saudi government for supporting ISIS.

Reports from Baghdad say the Government of Iraq has evidence the MEK has collaborated with ISIS. The Iraqi Government revealed evidence that equipment which went missing from Camp Ashraf after the main group of residents were transferred to Camp Liberty, is now being used by ISIS. The equipment includes military vehicles with gun mounts. Ahmad Al-sharifi, a prominent security analyst in Baghdad has published the evidence, and says there is no doubt some equipment currently used by ISIS is that previously used by the MEK. He goes on to say the source of support for ISIS is clear for those in the region, and only a small part of this support comes from the MEK.

Earlier in October 2013, Maryam Rajavi, the co-leader of the MEK, also released a statement condemning the execution of terrorists, while a group of Iranian border guards were killed in cold blood close to the Iranian border with Pakistan.

The MEK website now claims that the revolutionaries of Iraq have thrown out Maliki’s commanders.