Former member of the Mujahedin Khalq Organization  (the MKO) returned home after 25 years of imprisonment in the Cult of Rajavi. 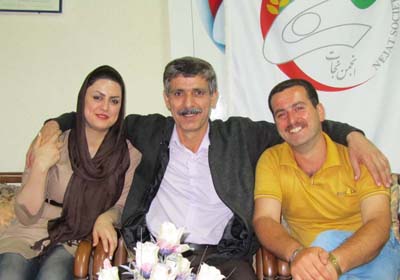 Nejat Society Gilan office celebrated the reunion of Mr. Rajabzadeh and his beloved children who were barely 5 years old when their father left home as a an Iranian soldier to fight Iraqi Baa’th regime. Mr.  Rajabzadeh was a war prisoner when the MKO recruiters deceived him to join their cult. Under the mind control system of the cult, he lost his youth and family.
While hugging his father, the son of Mr. Rajabzadeh,  Mehran cried , "Shame on Rajavi who separated me and my sister from our father for 27 years! He made us live in grief and suffering."
Rajabzadeh’s daughter, Razieh hugged and kissed her father. She appreciated the efforts of Nejat Society for the return of her father.
Reza Rajabzadeh who could hardly ever control his tears said:" I’m sorry…I love my children…Shame on Rajavi who broke down a lot of families! I will not stop denouncing him and his cult unless all prisoners of Camp liberty are released."
Reza Rajabzadeh left the MKO about two years ago. After his release, He stayed in a hotel in Baghdad as he wanted. He was one of the active ex-members of the group who revealed the notorious safe house of Masoud Rajavi, Base 49.