Around 800 students from Krakow agreed to travel to the German capital to party, to explore and to support an Iranian organization accused of terrorism. “I signed up for this event, because it’s a cheap way to go on a 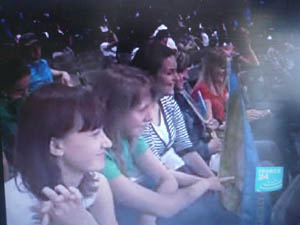 foreign trip and do sightseeing in Berlin.” Chalicka Iga is a student from Krakow. She is one of the approximate 800 Krakow students who are going to Berlin for a meeting held on March 7 by the People’s Mojahedin. A few years ago this organisation appeared on lists of international terrorists. Similar trips have also been organized in other Polish cities.

Advertising for the trips seems tempting – the total cost of travel in both directions and stay in a hotel with breakfast is only 15 euros or 65 zł. The problem is that most young people have no idea who is organizing the Berlin Conference, and what will be happening in it. The organizers for the trip from Poland have created a Facebook page for the invitation but do not give specifics.

On the page you can read that the theme will be “the protection of and respect for human rights and the struggle for democracy in Iran.” But we are not told which Iranian group is organizing the conference. However, there is a warning that “if you leave the meeting, you will be made to pay the full costs of your travel and stay in Berlin”.

When we called the number given on the web, we were told that the organizers are associations supporting the struggle for democracy. The person responsible for compiling the departure list would not, however, give us a Polish contact for the tour. Facebook is the only information we had and it says that “the subject is the same as every year in Paris”.

The point is that in 2008 the People’s Mojahedin held a rally at Charles de Gaulle airport. That was attended by around 3.5 thousand Polish students and was met with criticism from Iran. The Iranian ambassador in Warsaw said that this event, in which a terrorist organization could deceive students, was a humiliation for Polish society.

Until yesterday the authorities of Kracow University did not know about the Berlin trip. In the same way as the Paris Conference, Professor Anna Krasnowolska from the Department of Iranian Studies at Jagiellonian University learned about the Berlin Conference in March from us. Professor Krasnowolska said “I advised my students not to participate in this. The way in which it is organized shows that the concept of democracy is foreign to the People’s Mojahedin”.

When articles began to circulate on the Internet showing the true face of the Conference in Paris, some students began to sell their tickets for the trip to Berlin. “I preferred to withdraw from participation in the meeting altogether. I even heard that the Americans refuse to issue visas to those who were at a similar conference”, the student from Krakow told us.

The People’s Mojahedin mixes Islam with Marxism. The group contributed to the overthrow of the Shah, but after the revolution lost the battle for influence against supporters of the ayatollahs. After the invasion of Iraq into Iran in 1980 they joined forces with Saddam Hussein and fought on his side at the front in that war. They lost support inside Iran, and are hated by the Iranian opposition for siding with Saddam. They have little influence in exile.