As the stranglehold of increasingly draconian anti-terrorism laws takes hold in the UK, this briefing focuses on British policy regarding the Mujahedin-e-Khalq Oragnsiation also known as the MKO or MEK and under various other pseudonyms and acronyms [1] . Whilst most groups on the list of proscribed organisations under the Terrorism Act 2000 have some sort of perceived Muslim or Islamic affiliation, the MEK – whilst claiming to have some Islamic affiliation –openly target a form of political Islam i.e. the Iranian government. The organisation boost prominent supporters from amongst the British establishment including a number of MPs and Lords, and calls for its unproscription have been made. This briefing discusses the treatment of the MEK and its supporters and their actions, in light of the terrorism laws enacted in the UK and highlights not only the abuse of these laws with the complicity of government but also the duplicity of the government’s stance on terrorism. HISTORY OF MEK [2] The Mujahedin-e-Khalq Organisation [3] is a cult like organisation [4] which has been proscribed in the UK. They were formed in the 1960s with the primary intention of overthrowing the then regime of Reza Shah Pahlavi. They fought alongside supporters of Ayatullah Khomenei to overthrow the Shah of Iran, but after the revolution it broke away from Khomenei and opposed the revolutionary government. They were expelled from Iran after the revolution.

The National Council of Resistance (NCRI), forms a ‘government in exile’, opposed to the Shah’s successors and has offices around the world. The leaders fight under a banner of human rights and democracy, accusing the Iranian government of denying freedom of expression, while they breach the prohibition of torture. They justify their actions based on the belief that the Iranian government must be destroyed through any necessary means. Maryam Rajavi is the head of this organisation. She is now living in exile in France, where she is carrying out propaganda to further their cause. PMOI is aware that only through the support of the West will they have any possibility of overthrowing the Iranian government.

However, the chances of succeeding in their aim have been greatly slimmed by their proscription in Europe. The history of MEK illustrates their innate terrorist nature. They have been involved in anti-Western attacks as well as terrorist attacks against the government in Iran and abroad. During the 1970’s, the MEK killed US military personnel and US civilians working on defence projects in Tehran. Furthermore, they supported the takeover in 1979 of the US Embassy in Tehran. The 1980’s show the MEK targeting Iranian officials by detonating bombs in the head office of the Islamic Republic Party and the Premier’s office. They killed over 70 Iranian officials. There were 4 suicide bombing attacks during the Friday prayers in four different cities in Iran [5]. According to some estimates 12,000 people have been killed in Iran by the activities of the MEK [6].

The nature of these attacks has been brutal and callous – the organisation was the first to use human bombings against civilians in the region, including at mosques, shrines and prayer gatherings. Other attacks include the firebombing of buses and assassinations of former members of the organisation.[7]

In addition to this, during the Iran/Iraq war, they fought alongside the Iraqi forces. In the 1990’s the MEK assisted the Saddam Hussein in suppressing the Shia and Kurdish uprisings in Iraq. They also conducted simultaneous attacks on Iranian Embassies. In April 1999, they targeted key military officers and assassinated the deputy chief ofArmed Forces General Staff. In 2000, the MEK attempted to assassinate the commander of the Nasr Headquarters (Tehran’s interagency board responsible for coordinating policies on Iraq). Further to this, a number of mortar attacks and hit-and-run raids on Iranian military, law-enforcement units and government buildings occurred.

In the late 1990s and early 2000s, the MEK tried to court support from the Taliban and spent much energy on this process. [8] In 2001 they were reported to have negotiated use of Afghan territory bordering Iran with the Taliban. [9]

Since 2001, the MEK have not actively taken part in outwardly terrorist activities, however they are still very much in existence and continue to promote their ideology to the West. Issues regarding the personality cult that surrounds its leadership have evolved, with many defectors exposing the internal workings of the organisation as abusive and corrupt [10]. A recent report by Human Rights Watch further elaborates on continuing reprisals against members wishing to leave. This includes solitary confinement, mental and physical torture and interrogation. [11]

Furthermore, the MEK continue to call for the removal of the Iranian government. They have convinced a number of politicians and leaders in the West to support them despite still being on the U.S and U.K list of terrorist organisations. 2. TERRORISM ACT 2000

Under the Terrorism Act, the definition of terrorism is extremely broad and vague and potentially outlaws any type of political activism:

Terrorist organisations proscribed under this legislation cannot operate in the UK. It is quite simply illegal. The offences related to proscription include the following:

• Membership of a proscribed organisation.

• Inviting support and fundraising for the proscribed association.

• Managing or assisting in the arranging of meeting to support or further the activities, or to be addressed by a member of a proscribed organisation.

• Addressing a meeting where the address encourages support for the proscribed organisation.

Regardless of the terrorist organisation’s proscription there have been a number of events which have occurred in the UK which are in breach of the legislation. However, no action has been taken in stopping these events occurring. Firstly, the organisation’s newspaper Mojahid is in circulation in the UK. Furthermore, this newspaper published an article on Tuesday 11th February 2003, No 615 (Appendix 1) showing Iranian protestors in London, who were demonstrating against the Iranian Foreign Minister’s visit on February 6 2003. Over a 1000 Iranian demonstrators alongside a number of MP’s condemned Dr Kharrazi’s visit. The Secretary of the Iranian Women’s Association (an affiliate of MEK) Laila Jazayeri threw eggs at Dr Kharrazi’s car. She was a held in Charing Cross police station for 2 hours before being released. [13]

Secondly, a series of demonstrations outside the French embassy in London, took place to protest the arrest of Maryam Rajavi in France under anti-terror laws, in the summer of 2003. Supporters of the MEK were clearly seen to be protesting, holding MEK banners and flags. A number of protestors also set themselves alight, resulting in one fatality. [14]

Thirdly, a concert was organised in Wembley on December 14 2003 by the Anglo-Iranian Community in Greater London and Phoenix Association for the Revival of Iranian Arts in Britain (Appendix 2). This was attended by Maryam Rajavi, the leader of MEK. Also, Marzieh, an Iranian performer and supporter of the MEK was the main guest at this event. Marzieh declared her support for MEK in 1994. She funded MEK and helped them buy tanks and guns for guerrilla operations against the Iranian government. She was also seen in a group of 100 fugitive fighters camping in the Iraq-Jordanian border during the Iraq/Iran war.

In March 2005, The Symposium of Jurist and Parliamentarians for Support of Iranian Resistance organised by Lord Corbett on the removal of the terror tag on PMOI. Further to this, a seminar was organised in the House of Lords by Lord Corbett and others on the 7th July (Appendix 3). The seminar intended to discuss human rights and democracy in Iran, and the proscription of PMOI. Another seminar was organised in the House of Commons on the 27th October 2005. At this seminar, a number of supporters of NCRI were schedules to speak and attend, but most importantly an NCRI representative was listed as a speaker (Appendix 4).

Furthermore, MEK have a number of supporting groups in the UK. (See Appendix 5). Finally, numerous British parliamentarians and lawyers have met with the MEK leader Maryam Rajavi (see Appendix 6).

4. THE UK RESPONSE TO MEK

Despite the foregoing evidence supporters of the MEK have strenuously argued that the MEK has no presence in the UK [15], and has never threatened any British interests and thus to proscribe the organisation appears unjustified and implies support of the Iranian government.

The supporters of MEK argue that this group fights against terrorism because they fight against Iran. Lord Corbett of Castle Vale, the leading figure against the proscription, has stood firm in his fight; criticising the British Government’s policy towards the Iranian government.

However, the actions of this organisation illustrate an image quite different to that portrayed by its supporters. The noted activities are clearly contrary to the Terrorism Act 2000. The organisation by its very existence comes within the official catch-all definition of ‘terrorism’ as it seeks to overthrow a government through illegitimate means.

However, while it is recognised that many other legitimate resistance groups come within this broad definition, a clear distinction must be made between the MEK and other such groups; that is MEK has a track record of targeting civilians. This failure to distinguish between legitimate and illegitimate targets bears a greater similitude to groups such as al-Qaeda. Therefore, if there was to be any campaign to unproscribe a group, it is difficult to make such a case for groups which deliberately target civilians such as MEK or al-Qaeda.[16]

Furthermore, whilst its supporters continue to portray MEK as freedom fighters, it should be noted that MEK hold very little support amongst Iranians in Iran or diaspora Iranians opposing the Iranian government, due to their participation in the Iran – Iraq war in support of Iraq. Despite protestations of being a government on exile, it seems clear that the MEK have little or no democratic credentials, regardless of the issue of terrorist violence.

Therefore, it is important for the UK to take a stringent approach when dealing with this and any other proscribed terrorist organisation but this has not been the case. Rather there has been little response from the British authorities towards the activities which have occurred in the UK. This brings into question a number of issues, firstly the true nature of this legislation and the manner against whom it is enforced, and secondly the basis of proscribing an organisation.

This reveals a double standard from the government. It is clear that British laws should be indiscriminate in nature and cannot proscribe an organisation because it disagrees with its objective, but rather through the means employed to achieve this objective. Such double standards undermine further the already shredded

credibility of a government that claims to want to attack terrorism, but seems to rather attack Muslims and Islam. 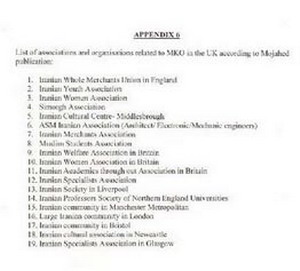 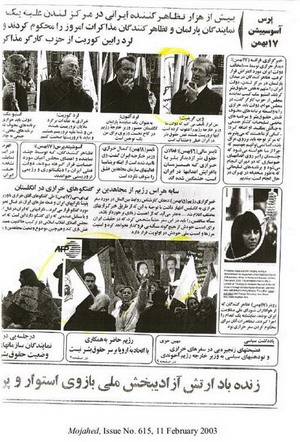 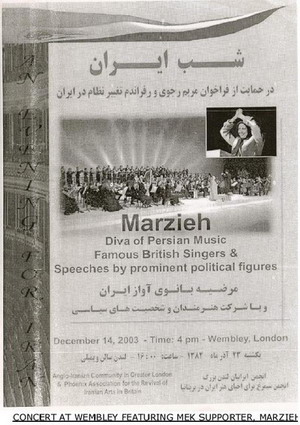 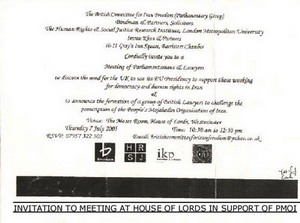 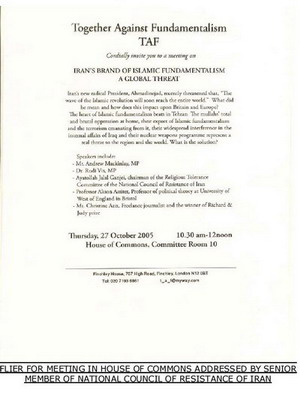 British Parliamentarians and Lawyers who have met with Maryam Rajavi include:

A delegation of British parliamentarians from all three main parties led by Lord Corbett of Castle Vale, March 2006

Lord Russell-Johnston, the former Chairman of the Parliamentary Assembly of the Council of Europe and a former foreign affairs spokesman of the Liberal Democratic Party, April 2005

David Amess, MP for Southend West and Parliamentary Private Secretary to the Secretary of Defence in the last Conservative government, March 2005

2. Unless specified as otherwise, information sourced from http://www.globalsecurity.org/military/world/para/mek.htm

3. The fact that this organisation operates under a number of different names was recognised by the US Department, who in 15 August 2003, amended the designation of MKO to add its aliases.

4. See http://www.iran-interlink.org/ for details of the organisation’s philosophy and structure.

5. See http://www.irandidban.com/enlist/terrorism_in_iran.asp for lists of victims of MEK terrorist attacks.

7. Charbonnier, V. (translator Forestenzer, T. R.) The People’s Mojahedin of Iran: A Struggle for what? 2003, France.

17. 14 October 2005; of the 40 groups currently proscribed under the legislation, 33 are ‘Islamic’/’Muslim’ groups. Full list of proscribed organisaitons is available to view at the Home Office website on http://www.homeoffice.gov.uk/security/terrorism-and-the-law/terrorism-act/proscribed-groups?version=1