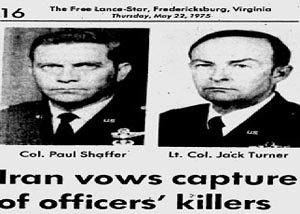 Mojahedin Khalq Organization MKO/MEK/PMOI from the State Department FTO. Others say it was a result of huge sums of spent money and another party affirms it was a decision by the US State Department in order to clear legal obstacles in the way of overtly arming and funding the terrorists in pursuit of a proxy war with Iran. Covert support for the blacklisted MKO has been ongoing since long under the Bush administration, and as Seymour Hersh’s “Preparing the Battlefield,” reported, MKO had been considered a possible proxy armed and financed to wage war inside Iran:

“The M.E.K. has been on the State Department’s terrorist list for more than a decade, yet in recent years the group has received arms and intelligence, directly or indirectly, from the United States. Some of the newly authorized covert funds, the Pentagon consultant told me, may well end up in M.E.K. coffers. “The new task force will work with the M.E.K. The Administration is desperate for results.” He added, “The M.E.K. has no C.P.A. auditing the books, and its leaders are thought to have been lining their pockets for years. If people only knew what the M.E.K. is getting, and how much is going to its bank accounts—and yet it is almost useless for the purposes the Administration intends.”

Granting that all these reasons are somehow justifiable to remove MKO from the FTO blacklist, the main question raised is why was the group ever put on the list? Maybe many Americans are unaware of the fact that MKO was initially formed as an anti-American militant group chanting anti-imperialist slogans and focusing all its might to fight and terminate any US-led economic and military enterprise in Iran at any price, even by murdering or sabotage activities.

According to the recorded facts on which the State Department relied to blacklist MKO, regardless of carrying out decades of brutal terrorist attacks, assassinations, and espionage against the Iranian government and its people, the group had targeted a number of Americans inside Iran including the attempted assassination of USAF Brigadier General Harold Price, the successful assassination of Lieutenant Colonel Louis Lee Hawkins, the double assassinations of Colonel Paul Shaffer and Lieutenant Colonel Jack Turner, and the successful ambush and killing of American Rockwell International employees William Cottrell, Donald Smith, and Robert Krongard as well as attempted kidnapping of US Ambassador Douglas MacArthur II.

The Iranian people need no justification for the US- made decision to delist MKO as they still and forever despise its ring-leaders as traitors and terrorists. But how the US can present any justification for the duplicity of unleashing the murderers of its own citizens while they were serving their country in another land is another question for the Secretary of the State to answer. Is it a new kind of policy to differentiate between American citizens? American people still remember, if the current and former officials have forgotten, that at the time an American military operation was attempted to put an end to the hostage crisis and to rescue the Americans held at the US Embassy in Tehran. Noteworthy, the hostage crisis was also intensified by the very same members of MKO who played their role to aggravate the situation to turn it into a real crisis. In its new version of policy, the US lets the killers and terrorists, according to released factsheets, free as a humanitarian bid!

If that is how Washington insiders care for the nation, and if interfere in other countries is a priority over internal and national interests, then, in whom should American people trust for national security and protection?