An Israeli court sentenced an Iranian-born Belgian to seven years in prison on Tuesday April 21, 2015 after 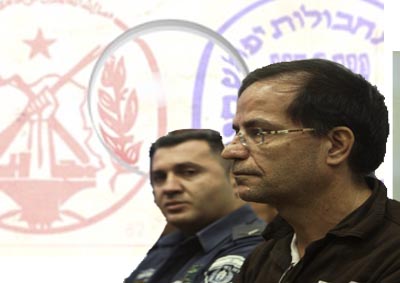 convicting him of spying for Tehran.

In September 2013 Israeli security forces announced for the first time the arrest of Ali Mansouri who was accused of spying.

Ali Mansouri was arrested on charges of having photographs of the US Embassy in Tel Aviv and other sites. However, pretty soon he was found to be a veteran member of the terrorist Mujahedin Khalq group.

The Belgium Newspaper Le Soir reported that the alleged Iranian spy had identified himself as a supporter of the MKO.

Besides, Mohammad Razzaghi , a former member of the terrorist Mujahedin-e Khalq Organization (MKO) identified him as a long serving member of the MKO.

Mr. Razzaghi said Mansouri was a close member of the MKO for at least 30 years and had been working as a mediator for the Mujahedin Khalq and Mossad. He added that Mansouri, who lived in Turkey between 1980 and 1998, travelled to Iran regularly posing as a businessman to gather information for Mossad and the MKO leaders.

Razzaghi indicated:” Many ordinary members of the Intelligence Section of the MKO remember him because every now and then they were tasked to do things for him”.

Razzaghi recalled:” I remember clearly a few times that I was tasked to go to see him to collect some pictures and documents about Mehrabad Airport and Jamaran H.Q. and to bring them to our safe house and hand them over to my commanders.”

MKO’s propaganda system desperately tried to whitewash the Organization of the accusations. The NCR published a statement and identified the arrestee to be a once infiltrator to the group. However, the statement itself was a proof of Mansouri’s link to the MKO.

The arrest seemed to be politically motivated since it was coincided with Netanyahu’s effort to convince Obama not to engage in diplomacy with Iran.

Actually it was one of the Mossad-MKO mutual scenarios. By arresting and accusing Mansouri as an Iran spy they tried to get rid of an expired agent and to derail diplomacy between Iran and the West in order to encourage a war with Iran on the other hand.

The MKO – Israel collusion is now known to everyone since it has been corroborated many times by different sources and individuals in the past. According to NBC, Israel provides funding, training, and weapons for the MEK to assassinate Iranian scientists. The award-winning, independent investigative journalist and writer of the Book : Manufactured Crisis: The Untold Story of The Iran Nuclear Scare” ,Gareth Porter has several times put The MEK as a client of the Mossad, serving to launder Israeli intelligence’ claims that the Israelis did not want to attribute to themselves.