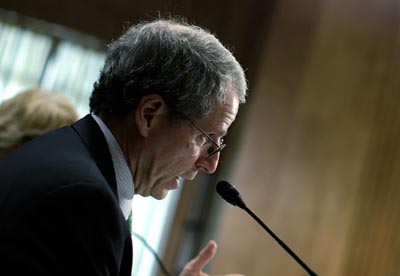 House counterterrorism panel is pushing ahead with a hearing on the Islamic State — even though two of its top witnesses are refusing to testify alongside the leader of a controversial Iranian dissidents group that was itself regarded as a terrorist organization as recently as 2012.

Arabist Robert Ford, who served as U.S. ambassador to Syria and also was posted in Baghdad, in Cairo, and across the Mideast, told Foreign Policy on Tuesday that he would not appear on the panel with Maryam Rajavi, leader of the Mujahedeen-e-Khalq (MEK).

He is the second witness to balk at sharing the spotlight with Rajavi. On Monday, former State Department counterterrorism director Daniel Benjamin pulled out of the hearing, which is scheduled for Wednesday.

“I didn’t want to be on a panel with the MEK. I was shocked they invited the MEK. What the MEK has to do with the Islamic State, I don’t have a clue,” Ford told FP. “I told the committee to put me on a panel without the MEK or I wouldn’t appear.”

Rajavi will not be at the hearing: She is set to testify via videoconference, presumably from Paris, where her National Council of Resistance of Iran (NCRI) is based. The NCRI is an umbrella organization of groups that include the MEK.

Until September 2012, the MEK was designated by the State Department as a foreign terrorist organization for the alleged 1970s killing of six Americans in Iran. The group is led by Iranian exiles who bitterly oppose Tehran’s clerical regime and is widely believed to have allied with Saddam Hussein in neighboring Iraq during the 1980s war between those two nations.

It has bankrolled numerous high-profile U.S. officials and other worldwide dignitaries who appear on the MEK’s behalf, a roster that includes former FBI Director Louis Freeh and former New York City Mayor Rudy Giuliani. Representatives for the MEK have not returned repeated requests for comment.

“As the leader of an Iranian opposition group, she can speak to how ISIS’ ideology is both similar to and different from the mullahs leading Iran,” Hynes said. “Finally, as an exiled leader of a group that has had members living in Iraq for decades, including most recently in a refugee camp in Baghdad, she has firsthand and on the ground knowledge of ISIS.”

Additionally, Hynes said, Rajavi has already been approved as a witness by the full House Foreign Affairs Committee.

Meanwhile, in a follow-up interview Tuesday with Foreign Policy, Benjamin — who had a role in the State Department’s decision to delist the MEK — criticized the House panel for agreeing to let Rajavi testify by video. He said that is not a perk that is offered to U.S. witnesses.

“Why won’t she travel here to testify?” Benjamin asked. He said he was offered — and turned down — tens of thousands of dollars by the group to speak on its behalf.

“This is still a group that has American blood from killings in the 1970s on its hands and killed many other innocents as well,” he said. “That has never been apologized for.”