The gathering, led by the a controversial, albeit influential Iranian exile organization — the National Council of Resistance of Iran — featured speeches and appearances by dozens of current and former officials from the 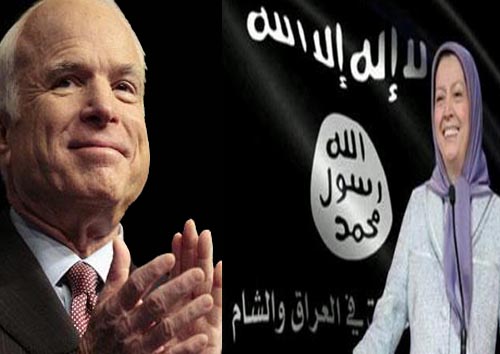 U.S., Europe and the Middle East, all of whom joined in the call for Iran’s Shiite Islamist government to be overthrown.

Among the more high-profile was Sen. John McCain, Arizona Republican and chairman of the Senate Armed Services Committee, who told the massive crowd in a pre-recorded video message that “the Iranian regime [is] the true epicenter of Islamic extremism in the world.”

The organization mentioned here is the political umbrella group dominated by the Mujahedin-e Khalq (MEK), the “former” terrorist group that is still a totalitarian cult. It’s not surprising that McCain has joined the embarrassingly large number of American politicians, former officials, and retired officers that associate with and advocate for this group. He frequently endorses dubious and disreputable groups when they happen to share his dangerous foreign policy goals. Nonetheless, it is worth noting that there are now many more current members of Congress openly embracing the MEK. That’s a dangerous development, and it could have a pernicious effect on U.S. policy-making in the future.

McCain has a long record of backing unsavory and vicious people that happen to support regime change or that share his hostility to certain other governments. He was a cheerleader for the KLA during the Kosovo intervention, he was a fan of the rebellion in Libya from the start despite the presence of jihadists in their ranks, and he has been one of the most outspoken advocates of sending weapons to rebels in Syria on the pretense that they were “moderates.” In addition to misjudging the “moderate” rebels, McCain has been a leading advocate for a policy that has sent weapons into Syria when they have been seized by Jabhat al-Nusra or ISIS. Those are just the most obvious examples of McCain’s terrible judgment. McCain doesn’t discriminate when it comes to choosing allies of convenience in pursuing unwise and reckless goals, so it was probably just a matter of time before he started associating with the MEK.