The Senator never disappoints and he is back at it again. Today, Senator McCain makes Neocon Watch for his letter to John Kerry expressing concerns that one US-supported terrorist gro 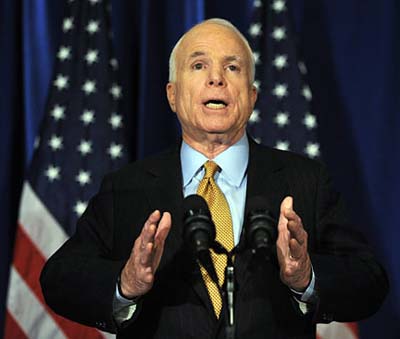 up may soon be threatening another US-protected terrorist group.

However, Senator McCain, along with most of the neoconservatives, have long been defenders of the terrorist MeK because their terrorism is largely confined to Iranian soil. It is not terrorism when a group kills civilians who happen to live in a designated "evil" country like Iran. The MeK also has a habit of delivering counterfeit "evidence" of Iranian nuclear activity to eagerly awaiting neocons and their compliant media.

But McCain is worried about them. Today he wrote to John Kerry to demand that they be protected by the US. He wrote:

As you are aware, due to the increasingly dangerous threat of the Islamic State of Iraq and Syria (ISIS), the resettlement process has stalled, and many fear that the people at Camp Liberty could be at grave risk if the security situation in Iraq, and especially in Baghdad, continues to deteriorate. For this reason, the Administration must move more quickly to find safe, permanent, and secure locations for Camp Liberty residents outside Iraq.

Well McCain should know all about ISIS and dangerous Islamist radicals in the area. He made at least one controversial (and illegal) visit to Syria, where he met with radical Islamists who were said to have been involved in "selling" journalist Steven Sotloff to ISIS for apparent beheading.

This is McCain’s world, this is the interventionists’ world, this is the neocon world. It is a world where terrorists are freedom fighters if they are sufficiently brutal against those the neocons want to see killed. It is a world where one can support and oppose terrorists at the same time. As Orwell wrote of Doublethink in 1984, neocons like McCain have "the power of holding two contradictory beliefs in one’s mind simultaneously, and accepting both of them."

Suffering fathers of MKO hostages to denounce the Cult