Following the deadly attack on Temporary Transit Location (TTL/Camp Liberty) and the death of at least 23 residents of the Camp, Maryam Rajavi the leader of the Mujahedin Khalq Organization (the MKO) said:” We had warned against such attacks…”! Considering that several of such attacks had previously shaken the MKO Camps in Iraq, Maryam Rajavi’s warning to the United States and the United Nations seems pointless. Both the US and UN have been committed to relocate the residents of the Temporary Transit Location (Camp Liberty) in third countries mainly Albania due to the critical situation of Iraq but the relocation process has been very slow. Why?

Regarding the immigration of millions of refugee seekers of the Middle Eastern countries to Europe in recent months, the official resettlement of a few thousand residents of the TTL in the past two years does not seem so difficult, especially based on the official memorandum that was signed between the group, the UN and the Iraqi government.

Hence, there would be properly one main reason for such slow process for the departure of the MKO members from Iraqi territory: leaders of the cult-like MKO do not want it. During the three past years, reluctance of the MKO authorities to move their base from Iraq has been testified in various occasions.

Human casualties are always a tragedy. Particularly, in case of Liberty residents, many of them were not able to leave the cult-like structure of the group. Although most of these members left Iran to struggle for what they called “freedom”, once they found out that they were laboring for the evil Massoud Rajavi as the mercenary of Saddam Hussein, it was too late for them to return home. They were taken as hostages by the Cult of Rajavi.

Maryam Rajavi holds both the US and the UN “officially and legally responsible” for the loss of lives in Camp Liberty while she never thinks of her own part in the disastrous incident.

The expenses of relocation of two thousand residents to Europe does not sound to be so much more that the expenses of the so called Grand Gathering they hold in Paris Villepint every year in June. The costs of the Villepint event include speaking fees, expenses of first class flights and luxurious hotel rooms for speakers of the event of whom dozens come from the United States. However, the UN is committed to pay MKO members who reside in Europe as refugees so the costs of departure from Iraq would get much less for the group.

Actually, the recent deadly attack on Camp Liberty as well as pervious attacks does not harm the MKO leadership but it gives them more chances to run their propaganda. As the US secretary of State and the UN Secretary condemn the attack, the MKO propaganda finds more room to show off; Maryam Rajavi uses the opportunity to get in the limelight for a few days to boast a meek figure of her cult of personality.

As she implicitly says that she has expected such deadly attacks on her members one should ask her: So, what did you do to facilitate the resettlement of your members to a safe place?

NO action has been reported by the side of the MKO about an alleged effort to relocate the cult members except their call for getting their arms back to allegedly defend themselves in Iraq which proves their violent substance.

In addition, families of Liberty residents who have suffered years of separation from their loved ones suffer more when they hear about such attacks while concerning the history of MKO’s cooperation with Saddam Hussein for brutal suppression of Iraqi Kurds and Shiites, hostile activities against the group seems unpreventable.

Maintaining the cult hostages in Iraqi territory hurts them and their families but their blood provides more fuel to the cult’s propaganda machine. 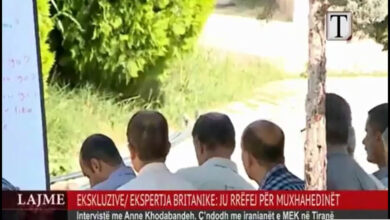