The Mujahideen-e Khalq (MEK) is an exiled opposition group that backs the overthrow of the Islamic Republic.

Founded in 1965 as a left-wing Muslim group, it staunchly opposed the Shah of Iran and was involved in the

protests that led to his downfall and the establishment of the Islamic Republic in 1979.

It initially endorsed the republic’s founder Ayatollah Khomeini but, after its leader Massoud Rajavi was barred from standing in the first presidential election, the MEK turned against the government.

It launched an armed struggle to topple the Islamic Republic, claiming responsibility for the assassination of several high-profile figures.

The authorities launched purge of supporters of the MEK, also known as the People’s Mujahideen Organisation of Iran (PMOI), and Mr Rajavi fled to Paris.

He later relocated to Camp Ashraf in Saddam Hussein’s Iraq, near the Iranian border, with most of his followers. There the movement steadily acquired the characteristics of a cult, with veneration of Massoud Rajavi and his wife, Maryam.

During the Iran-Iraq war in the 1980s, the MEK carried out several armed attacks on Iran in coordination with Saddam’s army, losing much of its domestic support in the process.

The MEK’s relations with the West have been complex. The United States and European Union listed the group as a terrorist organisation during the pro-reform presidency of Iran’s Mohammad Khatami, only to reverse the decision under his hardline successor Mahmoud Ahmadinejad.

The MEK scored a propaganda coup in 2002, when it revealed the existence of Iran’s major nuclear facilities. This led to a long standoff between the Islamic Republic and the West.

Maryam Rajavi, the MEK’s leader is referred to by followers as “Iran’s president in exile

In post-Saddam Iraq the group disarmed and eventually relocated to Camp Liberty, a former US military base near Baghdad, fearing for the safety of its members under Iraq’s Shia-dominated government.

There are estimated to be over 2,000 followers in the camp, while the MEK’s leaders are based in France. They refer to Maryam Rajavi as “Iran’s president in exile”. Massoud Rajavi himself has not been seen in public for years. 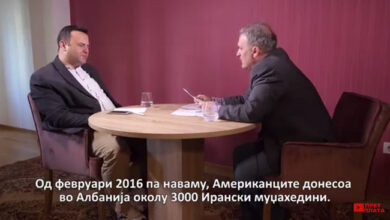