The fifth trip of families of members of the Mujahedin Khalq Organization (the MKO/the Cult of Rajavi) to Camp Liberty near Baghdad, Iraq, ended with a dramatic clash between the families and a few of residents of the camp who were seemingly guarding the camp. At the first place, the alleged guards of Liberty countered the families’ kind and fair treatment and their offer of candies by swearing and intimidating. However, families kept cool and tried to offer sympathy to them for they were aware that cult members do not act based on their own logic, they just repeat what they have been indoctrinated for years. 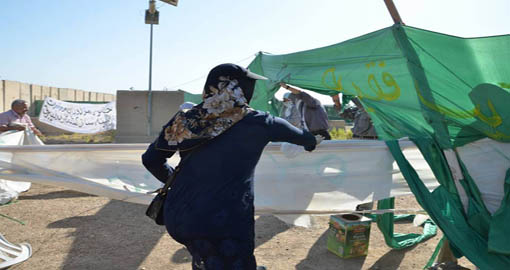 When one of the family members of a Liberty resident tries to squeeze his hand through a hole in the curtain to take the hand of her brother’s comrade, the cult members get so terrified that they cannot control their vehement reaction. Although their faces are covered with masks or scarves, panic is evidently seen in their behavior. 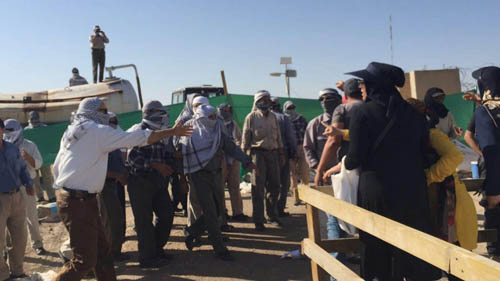 Reasonably, a dozen of men and women in normal clothes of normal citizens with no weapons, behind a wooden gate secured by Iraqi police do not sound dangerous but the members of the Cult of Rajavi get really nervous and confused when they find themselves face to face to the people behind the torn curtains.   Their anxiety comes from their fear of the outside world. 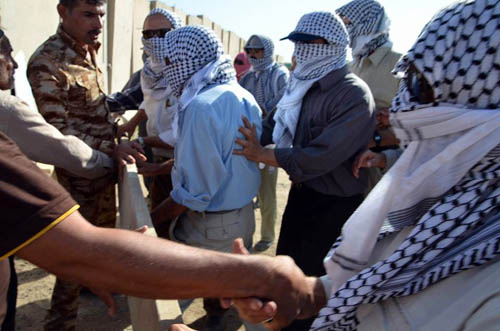 Members of the Cult of Rajavi are manipulated to maintain loyalty and obedience to the cult leaders Massoud and Maryam Rajavi. They found themselves threatened by the slightest ‘negative’ thought, word or deed. They fear thinking independently, the outside world, the illusory enemies and eventually they fear leaving the group.

These fears have been created by the MKO leaders through many years of mind control under a very destructive methodology. The methodology teaches the members to fear the outside world. This is used to deliberately scare members in order to gain their attention and make them susceptible to mind control. Families are forbidden to contact because they cause a crack in the huge wall that Massoud Rajavi has built around the minds of his members for over three decades.

Families who picket outside the doors of liberty have accurately realized that in order to help their loved ones leave the cult they should break the news to the camp. Families try to tell them the truth of the free world crying that many other members of the MKO have previously left the group and they are living a normal life in the free world now. They name a list of former members loudly. They give out some photos of the defectors of the MKO –although the guards of the group tear the photos mulishly and throw them back. Mothers, fathers, brothers and sisters of Liberty residents call their names assuring them that no danger threatens them outside the cult of Rajavi.

Actually, members of the MKO cult need assistance from the outside world. Today, families are the closest icons of the free world to the hostages kept in Camp Liberty. On the other side, the authorities of the MKO know well that family is the biggest obstacle in the way to keep their absolute control over members. Therefore, the group propaganda works hard to demonize family for members but the warmness of the hand that succeeded to take the hand of a Liberty prisoner through the gap in the curtain will never leave his mind…