If Saudi Arabia is on a quest to paint itself as a responsible actor in the region, the kingdom took a big step backward over the weekend. That’s when a former top official—who remains an influential figure—declared 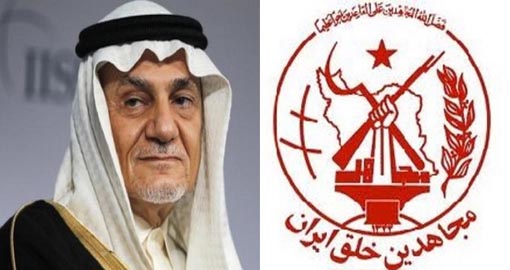 support not only for regime change in Iran but for one of the strangest would-be agents of overthrowing the Islamic Republic. Prince Turki bin Faisal al-Saud, the former head of the Saudi intelligence agency and a longtime ambassador to the U.S., spoke to a gathering of thousands of Iranian exiles in Paris. The group was gathered to fête Maryam Rajavi and her movement, the Mojahedin-e Khalq (MEK), a group that, until 2012, the United States and other Western countries listed as a terrorist organization.

Al-Faisal more than played his part in the adulatory chorus. “You, Maryam Rajavi,” he said, according to the Saudi-owned pan-Arab newspaper Asharq al-Awsat, “your endeavor to rid your people of the Khomeinist cancer is an historic epic that, like the Shanameh”—the most famous Iranian epic poem—“will remain inscribed in the annals of history.” Rajavi’s endeavor, of course, has been the monomaniacal pursuit of bringing down the Iranian regime—under any banner she can fly—in order to install herself atop Iran’s government.

MEK has a long and strange history. With roots as an Islamo-Marxist revolutionary organization dating back to the 1960s, MEK launched various terrorist attacks during the time of the Shah to achieve its aim of toppling the monarchy. As a result, it faced a brutal crackdown. During the 1979 Islamic Revolution, MEK fought at the vanguard of anti-Shah forces. But after the king’s overthrow, Ayatollah Khomeini’s Islamic Republicans stripped MEK of its potential place in the halls of power by. Around that time, the group consolidated itself around the leadership of the charismatic and mustachioed Massoud Rajavi. Facing another round of brutal repression, this time under Khomeini’s nascent rule, Rajavi led his followers into exile, setting up a political base in France and a military one in Iraq, where Saddam Hussein’s regime lavished weapons and cash on MEK fighters. In 1985, Rajavi took Maryam Abrishamchi as his wife and co-leader. Critics, including no small number of former adherents, allege that a cult of personality has developed around the pair.

Al-Faisal’s appearance at the MEK gathering was remarkable on a number of fronts. The anti-Iran Gulf Arab monarchies, among which Saudi Arabia is the driving force, haven’t made a show of open support for such a controversial anti-Iran groups like MEK. (Other Gulf monarchies and their allies also appeared at the Paris summit: a member of parliament from Bahrain gave a speech, as did a delegation from Jordan, another monarchy with close security ties to the Gulf.) The Sunni Gulf states—flush with petrodollars and bearing sectarian grudges against Shiite Iran in a regional battle for hegemonic primacy—have long been suspected as a source of funding for MEK’s lavish spending, but no reliable reports have definitively established where the group gets its cash. Al-Faisal’s public move in support of the group certainly provides one more piece of evidence to link Gulf States to MEK’s financing.

Then there was al-Faisal’s speech explicit call for regime change in Iran and support for MEK. The crowd at the MEK rally, donning their standard yellow vests and hats, interrupted al-Faisal’s speech with Arabic chants in favor of bringing down the Iranian regime. Al-Faisal, who had been delivering his speech in Arabic, responded in kind: “I, too, want the fall of the regime.” At The Intercept, Robert Mackey noted an irony: the Arabic chant to which al-Faisal responded so positively is the same one that “was used in the pro-democracy protests across the Middle East in 2011 that Saudi Arabia fought so hard to repress.”

A host of other ironies also loom over al-Faisal’s appearance. MEK, for instance, long ago gave up its aim of an Islamic Marxist state in favor of hollow pledges to establish a secular democracy in Iran. But Saudi Arabia and its Gulf allies are about the farthest thing from a secular democracy. Conservative religious sentiments inspire the Saudi royal family’s rule, and political repression is endemic wherever Saudi Arabia enjoys considerable influence. What’s more, MEK directed the first decade of its terrorist attacks at bringing down the Shah’s repressive monarchy, denouncing its form of government as inherently unjust. The kingdom of Saudi Arabia, then, makes an especially strange bedfellow.

Let’s be blunt: MEK is neither a viable agent for regime change in Iran nor the “government-in-exile” the group pretends to be. They enjoy almost no support among Iranians at home or abroad. Exiled royalists hate them for their terror war against the Shah’s regime and their part in the Islamic Revolution. Inside the country, they are reviled across the political spectrum for siding with Saddam Hussein—and fighting against Iranians—in the Iran-Iraq war.

Why, given all that, would such a well-connected former Saudi official make such a show of supporting MEK? Although MEK is famous for lavishing money on its supporters—paying as much as $50,000 for a short speech and investing in politicians through campaign contributions—al-Faisal, as a member of Saudi Arabia’s super-rich royal family, probably scoffs at the sort of cash MEK offers. Instead, al-Faisal attended for obvious reasons: to put a thumb in Iran’s eye. In this, the high-ranking prince is acting like the Washington Iran hawks that have warmed up to Saudi Arabia since, mostly out of mutual enmity for Iran, the Gulf Arab states and Israel began blowing kisses to each other over their shared antipathy for the Iran nuclear deal. Several such hawks were in attendance in Paris. As The Intercept reported, among the attendees were Newt Gingrich and superhawk former UN ambassador John Bolton.

For close MEK watchers, such as myself, perhaps the most interesting wrinkle—aside from the Saudi prince’s ridiculous gesture toward Rajavi—was al-Faisal’s apparent announcement of Massoud Rajavi’s death. The MEK leader hasn’t been seen in public since the US invaded Iraq in 2003, at which time Massoud was holed up with thousands of MEK fighters at the desert base Saddam Hussein had bestowed upon the group. Occasional reports of Massoud addressing followers by phone have appeared, but even the last of these was years ago. Rumors of his death have swirled for years. Al-Faisal appeared to confirm them when he referred to Massoud Rajavi as “marhoom,” which means “late.” Here’s how Al Monitor’s Arash Karami reported the fallout:

In response to Faisal’s comments about the “late” Massoud Rajavi, the MEK continued to deny Massoud’s death. Shahin Ghobadi, spokesman for the MEK, said Faisal’s comments were “misinterpreted.” In the audio, however, Faisal refers on two different occasions to Massoud as “marhoom,” which means “late” in both Arabic and Persian.

That’s just like MEK: lying about something everyone can see is true. The possible revelation of Massoud Rajavi’s death, however, doesn’t change the geopolitics: Maryam Rajavi is still around. With Massoud out of sight for nearly a decade and a half, MEK has operated under her aegis, their relevancy slipping away but the core of adherents holding to the pipe dream of retaking Iran. Perhaps al-Faisal’s appearance does indicate a program of Saudi Arabian support for MEK. But it will only allow the group’s followers to cling to their fantasy of putting Rajavi in charge of their homeland. MEK trudges on, thanks to supporters with deep pockets in high places.

Ali Gharib is a New York-based journalist on U.S. foreign policy with a focus on the Middle East and Central Asia. His work has appeared at Inter Press Service, where he was the Deputy Washington Bureau Chief; the Buffalo Beast; Huffington Post; Mondoweiss; Right Web; and Alternet. He holds a Master’s degree in Philosophy and Public Policy from the London School of Economics and Political Science. A proud Iranian-American and fluent Farsi speaker, Ali was born in California and raised in D.C.