Terrorist attacks and threats come so thick and fast these days that even security forces admit they can no longer cope with the situation all the time. 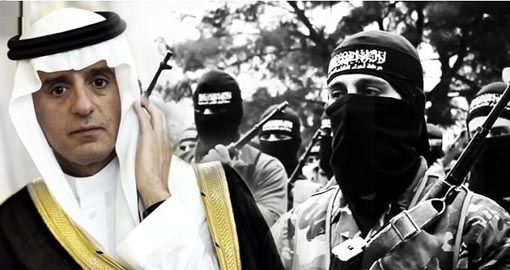 Any Time, Any Place: Paris, Riyadh Behind Any Possible Terror Attack in IranTEHRAN (FNA)- Terrorist attacks and threats come so thick and fast these days that even security forces admit they can no longer cope with the situation all the time.

-Huge fire breaks out near NATO base in Turkey

All these grim news headlines appeared in just one day or two, meaning, we must now accept terrorism as an any-time, any-place occurrence. We must also accept that although Iranian security forces have dismantled tens of terrorist cells only in the last two months, it could happen here in Iran too. After all, terrorists don’t act alone and terror loves company.

It’s also a nightmare scenario for those in charge of national security affairs in Iran. They might not know which city or town might come under attack, but they damn well know where it will come from and who is behind it: France and Saudi Arabia. And they have perfect evidence to substantiate.

Here, Deputy Chief of Staff of Armed Forces Brigadier General Massoud Jazzayeri has blasted Paris and Riyadh for their support for the Mojahedin-e Khalq Organization (MKO, also known as MEK, PMOI and NCR), saying they will account for any possible terror attack in Iran.

In his words, “(France’s) hosting of Monafeqin (the hypocrites as the MKO members are called in Iran) grouplet as one of the most dangerous and criminal terrorist groups in the world and the presence of Western and Arab figures at their meeting shows these countries’ support for terrorism.”

He referred to the participation of former Saudi General Intelligence Directorate Chief Turki al-Faisal in MKO’s annual gathering in Paris earlier this month and said his call for terror attacks against Iran is a serious matter that cannot be overlooked; the finger of accusation will be pointed at Riyadh and Paris in case Iran comes under direct terror attack.

-The MKO has assassinated over 17,000 Iranians in the past four decades. The death cult also killed many Americans and Europeans prior to the 1979 Islamic Revolution. They killed before, they can kill again. It’s not a matter of if but when.

-The Paris meeting with some Western officials and former Saudi intelligence chief in attendance means there is a clear link between Saudi Wahhabism, the MKO and Paris. It marks a stain on the French government’s record and constitutes a blatant act of intervention in Iran’s internal affairs. Simply put, it shows the French and the Saudis support the terror group and they have a momentum on their own.

-Terrorism shocks, bewilders and frightens everyone. Those who try to categorise it as good and bad are only fooling themselves. These double standards makes it even harder for those trying to fight it. The self-serving policy fuels international and homegrown terrorism, contentious issues (immigration, Islamophobia, racism), confusion and distress, political and diplomatic instability, disintegration, mass migration, economic volatility and deep divisions, rocking an increasingly rattled and divided world community.

-All this comes against the backdrop of an ongoing effort by security forces to foil any possible terror plot in Iran. However, no one can guarantee the safety of every one at any time. So far they have been astonishingly successful in defusing tens of Saudi-sponsored terrorist plots that were aimed at rocking Tehran and other major cities across the country.

Yet, the very fact that tens of the captured terrorists have acnowledged Saudi suppor and Israeli training entitles Iran to file lawsuits at international courts.

The newly accepted FATF rules by Iran entitle the country to file a request to receive all information, including the financial transactions of the terrorist groups from France, Saudi Arabia, the US and others irrespective of their lableing as a terrorist or opposition group in those countries.

The very fact that such threats and concerns exist in Iran and elsewhere in the world is the reason why Iranian security officials and commanders are trying their best to wake up all those complacent counterparts in Paris and Riyadh from their winter sleep – before something terrible happens..

Lest there be any doubt, those who flirt with internationally-recognised terrorist groups are on the wrong path. They need to take a serious look in the mirror, respond to their own particular problems, and take a tough line on terrorism. Any terror attack on Iran coming from their proxies won’t bode well. It won’t go down well. It will change the world and it’s not a good thing. All sorts of outcomes are possible.­