Ahmadreza and Mohammadreza Iranpour, traveled to Turkey in 2002. They wanted to immigrate to a European country to make a better life there.

Unfortunately, in Turkey the MKO recruiters tricked them into joining the group. They were then transferred to Camp Ashraf, Iraq. For a long time the Iranpour family had no news of them until they were informed of Mohammadreza and Ahmadreza whereabouts through some defectors of the MKO cult.

In January 2004 they succeeded to meet their beloved brothers at Camp Ashraf. 20 MKO members accompanied Mohammadreza and Ahmadreza in the meeting in order the meeting not to be private.

From then on the Iranpour family have traveled to MKO Camps in Iraq several times to have a visit with their beloved brothers or at least get a news of them, still they were not allowed.

The two brothers transferred to Albania along with other MKO members last year.

March 29th, is the anniversary of Ahmadreza’s birthday. Iranpur family gathered together and celebrated his birthday from far away.

They published the photo along with a letter to their beloved brother, Almadreza. 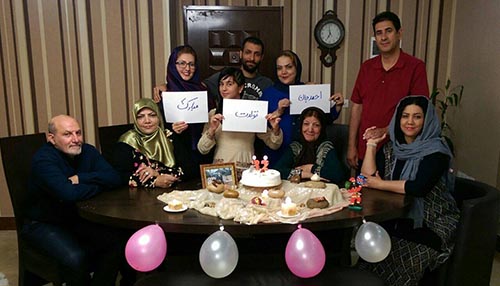