The Albanian based MEK could have helped Saudi funded ISIS to carry out the terrorist attack on Tehran. 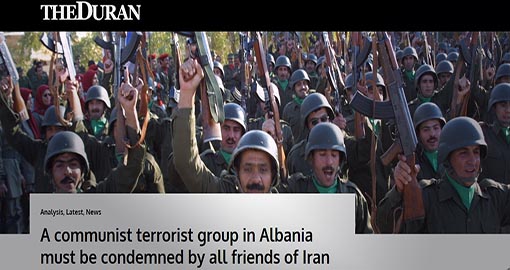 ISIS has claimed responsibility for today’s deadly terrorist attack in The Islamic Republic of Iran. Iran in turn has pointed a finger at Saudi Arabia which is well known as an agitator for aggression against Iran and also a major covert supporter of ISIS and al-Qaeda.

But it is another group that historically  has waged terrorist atrocities against Iran. This group is Mojahedin-e Khalq (MEK) also known as the People’s Mojahedin Organisation of Iran.

The group is an expressly stated communist terrorist group whose goal ever since the Islamic Revolution of 1979 is to overthrow the government of Iran. That being said, the group is often more than willing to forgo its ideology in order to make alliances of convenience with any state or group willing to help it pursue its penultimate goal of destroying the Islamic Republic of Iran.

Throughout the 1980s, 1990s and early 2000s the group found shelter in Iraq, but the Shi’a dominated Iraqi government kicked the group out of the country in 2009.

The group then relocated to the NATO member state of Albania, a known sponsor of semi-secular Sunni terrorism in the Balkans.

The group now thrives in Albania as does ISIS. Under the radar of international scrutiny, ISIS has quietly co-opted much of the lucrative narcotics trade in Albania from local mafia lords. The result is the early stages of a perfect storm whereby Albanian political corruption and the effective Albanian mafia state are sharing the same political geography with a communist anti-Iranian terrorist group and also ISIS.

Although there is little doubt that as the Iranian Revolutionary Guard have said, Saudi has a hand in today’s tragic event, but this does not preclude the MEK from having a hand in the attack.

Concerned parties must seriously examine whether the MEK and ISIS have forged some sort of pact beneath the radar. Such a thing is entirely possible for several reasons.

First of all, ISIS has never once carried out an attack on Iranian soil and given the secure and stable nature of Iran, it almost beggars belief that they were able to do so.

Secondly, if indeed the Saudi/ISIS hand was in play and was therefore able to penetrate deeply into Iran, in Tehran no less, which is geographically far from both Iraq and Syria, it means that whoever did this had to penetrate deeply into Iranian territory before carrying out the crime. The MEK, although with difficulty, have managed to penetrate into Iran many times before and carry out terrorist atrocities. They know the internal geography of the country far more than the average ISIS commander. Furthermore, studies have shown that like ISIS, the MEK also receives funding from Saudi Arabia.

Consequently, there is every possibility that ISIS and the MEK have forged some sort of alliance or at minimum an agreement on the sharing of intelligence.

In either case, the NATO member state of Albania is guilty of harbouring and facilitating terrorism, something that Serbia has warned of for many years.

Albania is the place where the MEK, ISIS, NATO and Europe meet. If Iran wants to truly avenge this atrocity, it must focus on not only its traditional Middle Eastern enemies, but also on Albania.

By Adam Garrie ,The Duran