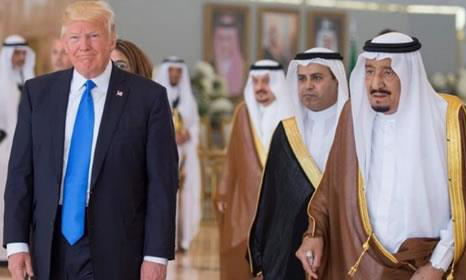 It’s strange how US President Donald Trump ignores the logic just because he believes what he likes to believe and ignores the truth.

While officially the White House is condemning the ISIL suicide attacks in Tehran, in keeping with their policy of being against ISIL, Trump’s own statement on the matter appeared less than wholly sympathetic, the man who is always in a tendency to create enemies is attributing the attacks to Iran “falling victim to the evil they promote.”

President Trump has made clear since the campaign that he does not like Iran, and spent much of his recent trip to the Middle East pushing hostility toward Iran, as well as portraying Iran as being to blame for most of the terrorism in the region. That ISIL is the world’s biggest terrorist organization, and that Iran has been heavily supporting both Iraq and Syria in fighting ISIL, doesn’t fit into Trump’s agenda. The fact that ISIL just launched cowardly terrorist attacks in Tehran is particularly damaging to the US agenda of trying to spin everything wrong in the Middle East as being Iran’s fault.

Trump’s desperate answer to this, then, is to remind everyone that Iran is a “state sponsor of terrorism,” an official designation by the US government which means effectively nothing, and only currently applies to three countries that the US doesn’t like, none of whom has anything to do with ISIL, Al-Qaeda, or other major international terrorist groups.

It’s a waste of time and effort, then, to deflect the Trump tweet as misdirected spittle. Iran is busy burying its civilian victims, working with Syria, Iraq, Russia and the Hezbollah movement to coordinate the response to this horrific and cowardly terrorist attack, and provide leadership and reassurance to its people and allies, seeing that:

– Saudi Arabia – and by association, that of US President Donald Trump – are to blame for the first ISIL assaults on potent symbols of Iranian ideology, setting the stage for spiraling tensions with Saudi Arabia, its regional minions and Trump, at a critical moment in the region.

– The consequences of attacks in Tehran will be felt around the world. The suspicious attacks came one week after the meeting of Trump with the leader of Saudi Arabia, one of the region’s reactionary regimes. It shows they are involved in this savage action.

– The attacks will make the Islamic Republic more determined in the fight against regional terrorism, extremism and violence. Tehran says it will prove once again that it will crush the enemies’ plots with more unity and more strength.

– There will be flintier measures against hardcore extremists in Iraq and Syria as well, much of it pointed in the direction of ISIL, Al-Qaeda, and their associates.

ISIL is at war, ideologically and militarily, with Iranian forces and allies in Syria and Iraq. On the other hand, ISIL has natural allies among anti-Iran regional states and terrorist groups in restive south-eastern Sistan-Baluchistan province, which has a large Sunni population. In 2010, Wahhabi extremists linked to the Jundallah network killed 39 people at a mosque in the province. Minority Kurdish terrorist groups and ethnic Arabs also have a history of small-scale attacks in the north-west and south-west respectively.

In sum, the Wednesday atrocities were set against the backdrop of the anticipated collapse of ISIL’s self-declared caliphate, as Iranian-backed Iraqi and Syrian army forces, plus Russian-backed Hezbollah and volunteer forces, close in on its Mosul and Raqqa strongholds. In response to this pressure, ISIL has called on its followers to take the fight to its enemies wherever they live. Wednesday’s terror attacks fit this emerging pattern of displaced activity by ISIL.

On the other hand, well-documented covert efforts by George W Bush’s administration in the 2000s to destabilize Iran by funding militant internal terror groups are not forgotten in Tehran. Nor is unofficial, on-off American support for the Mujahedin-e-Khalq, or the MKO, a terrorist group backed by the United States that is responsible for numerous terror attacks inside Iran.

It doesn’t take a strategic mind to realize that Trump’s overt hostility is encouraging a repeat of past destabilization efforts, directly or indirectly. Overturning the previous US president Barack Obama’s policy of limited engagement, Trump has launched a blistering attack on Iran. Speaking during a visit to Riyadh, he demanded Iran’s international isolation, claiming Tehran was the world’s main exporter of “the fires of sectarian conflict and terror”.

He even trumpeted a big arms deal with the Saudis. And this week he threw his support behind Riyadh’s diplomatic and commercial ostracism of Qatar, which has tried to keep on good terms with Iran. This has led regional politicians to warn of imminent war.

All told, Riyadh is ISIL’s biggest inspiration and supporter. Iran, the European Union, and the United States are on the same side fighting the ISIL in Iraq. Unlike the autocratic Persian Gulf regimes, Iran also has a democratic political system that just came under attack, with an elected parliament and president, that confounds the “sponsor of terrorism” charge by Trump. This awkward fact seems to enrage Trump, the Saudis and ISIL in equal measure. That’s why those who live in a reality universe are better off ignoring his  tweets exploiting the Tehran attacks.