Based on testimonies of survivors of the Mujahedin Khalq Organization ( the MKO/ MEK/ the Cult of Rajavi) there have been two ways to get trapped in the cult. First group –mostly joined the cult of Rajavi in the beginning years of its foundation—were inspired by their high ideals which finally lured them into the cult and the second group –most recently recruited—were lured into the group by the fraudulent recruitment methods that promised them a better life, including job, wealth and citizenship of the European countries. 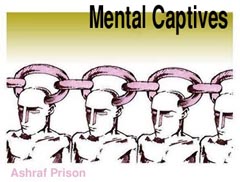 Once the person is surrounded by the oppressive controlling system of the MKO, what restrains him from leaving it? Alex Stein’s “Terror, Love and Brainwashing”, is helpful to realize how cults work. The MKO is one of the cult-like systems that she investigates. Her studies helps her prove that the relationship between a follower and the cult guru is often a “disorganized” attachment. The contradictions is detected between the “apparent kindness” of the cult leader –as it is usually seen in the appearance of Maryam Rajavi— and the confusion and the unhappiness members endure in the oppressive atmosphere of the cult.

According to Alex Stein’s personal experience and her later researches, live-in members of cults like the ones of the MKO cult, who are socially isolated, will lose their family, friends and all attachments of a normal life. She calls these individuals as “total converts”. This causes their unwillingness to leave the cult and its doctrine.

Members of the Cult of Rajavi are not only immersed in the beliefs of the cult but, they are totally immersed in the cult itself. As Alex explains, “Processes of brainwashing rest on the creation of stress or threat with no escape other than the apparent (un)safe haven of the group.” This is exactly the atmosphere ruling the MKO members in the group camps formerly in Iraq and in France and Albania now. Self-criticism meetings, permanent supervising of a hierarchical system, mandatory working schedule, sleep deprivation, forced celibacy are all tools to maintain the stressful, threatening structure.

“This results in a state of terror that causes a dissociative state resulting from a disorganized bond to the leader, or the group as proxy. The hyperobedient and hypercredulous deployable follower existing in this airless world gripped by an iron band of terror can be asked to engage in acts they would not have previously done, nor, once out of the group, would they do in the future,” states Alex Stein.

This way, members are gradually driven to engage in acts they would not have done before their involvement in the totalist system of the cult. For examples, acts of terror, suicide and self-immolation committed by the MKO operatives are numerous in the official history of the group published by different sources including the US State Department, The Human Rights Watch and the RAND Corporation etc.

According to Stein, “A totalist system is formed and controlled by a charismatic authoritarian leader. It is a rigidly bounded, dense, hierarchical and isolating system supported and represented by a total, exclusive ideology. The leader sets in motion processes of brainwashing or coercive persuasion designed to isolate and control followers. As a result followers are able to be exploited, and potentially become deployable agents, demonstrating uncritical obedience to the group, regardless of their own survival needs.”

Alex Stein names Massoud and Maryam Rajavi in the list of totalitarian cult leaders who forbid the formation of any attachments –even imaginary or internal—because they consider it a fundamental threat to the emotionally and disorganizing attachment that they themselves have imposed on members. She writes, “Maryam Rajavi of the Iranian political cult the Mojahedin-e khalq, acted as a kind of front of the leader, Massoud Rajavi, and was known as the group’s “Ideological Mother”.

In Terror, Love and Brainwashing, Stein presents an approach to understanding the profound effect of manipulative processes. Based on her book, it may take even the most courageous and the most intelligent people years to leave or to escape a totalitarian system. That’s why one may find a large number of educated, clever people among the survivors and even currently members of the Cult of Rajavi.

“This goes beyond the idea that simply teaching ‘critical thinking skills’ is enough. While that is, of course, important, we also should be teaching about the specific kinds of mechanisms that interrupt the ability to think critically,” she concludes.