Did the American delegation interrogate Maryam Rajavi in Tirana? 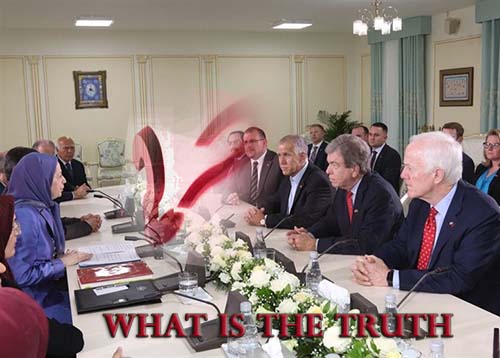 The US fact finding delegation visited the Mojahedin Khaq (MEK) camp in Albania.

Four American Senators travelled to Albania and held meetings with the President, Governmental officials and opposition figures in that country. The American Embassy in Tirana describes their purpose of visit as “discussing security, defense and counterterrorism cooperation”.

The official Albanian News agency describes this visit as part of a “Fact finding mission in Balkan Countries”.

On the fringe of this “American delegation” fact finding mission they also visited the headquarters of the Mojahedin Khalq terrorist organisation (aka, MEK, Saddam’s private army, NCRI, Rajavi cult)  where they spoke with Maryam Rajavi and others.

Contrary to the paid advertisements and propaganda issuing from the Mojahdein Khalq cult which tries to portray this visit as somehow in line with the anti-Iranian terrorist agenda of the group, the goal of the delegation has been to make sure that the arrangements put to place by the U.S. Government, United Nations and the Albanian Government has been executed properly and the group does not pose the threats it posed to people when they were stationed in Iraq.

The Mojahedin Khalq (Rajavi cult) had played the same kind of scenario when Senator John McCain visited Albania last March. Maryam Rajavi tried to pretend that he had been travelling to visit her in Tirana. But McCain had travelled to the Balkan country to meet government officials and according to the Albanian official News agency (ATA) he met with the President, PM, Defence Minister, Parliament speaker and the leader of the opposition.