Following President Rouhani’s re-election in May 2017 many Middle East analysts arrived at the conclusion that the 78% turnout and clear majority was a clear enough indication that while the people of Iran do want greater political and social freedoms, they are prepared to seek this incrementally through civic pressure, not through violent regime change. 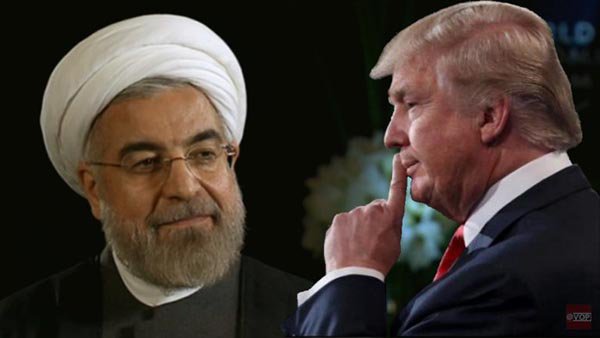 The rationale of experts, however, has not stopped Iran’s enemies from aggressively demanding the kind of regime change aimed at preventing growing Iranian influence in the region. Donald Trump’s confrontational, high risk approach toward Iran, using the JCPOA as an instrument of conflict only feeds this agenda.

The problem is, that while anti-Iran antagonism has deep roots in the American psyche, the stark reality is that regime change would necessarily be imposed by America through violence, whether war or terrorism or both.

And while ‘regime change’ makes a good sound bite, the recent events in Egypt, Libya, Iraq, Syria and Yemen, should sound a claxon warning. Iran has developed a formidable military and naval capacity in recent years. Its missile programme presents a real threat to American interests in the region – not least the state of Israel.

Confrontation with Iran would prove catastrophic not only for the whole region but for the protagonists themselves. Would American taxpayers really accept another expensive and endless war? If Iraq and Syria have spawned chaos, destruction and blowback, the consequences of a military conflagration involving Iran would be much worse. There is good reason why, even though Saudi Arabia has maintained a verbally hostile stance toward Iran for two years, nothing has actually happened.

In any case, what system or government do the regime change proponents propose would replace Iran’s current rulers. The country itself presents an enviable level of civic stability in the region. As much as they may wish for it there is no evidence of a nationwide indigenous protest movement with the will or capability of stepping into the breach.

When Donald Trump entered the White House, Reza Pahlavi, son of the exiled Shah of Iran, wrote a letter of introduction. The monarchists, he suggested, are natural allies of the United States and would be happy to work toward regime change with the new administration. This overture was rebuffed. The fact is, that when Reza Pahlavi offers his services, there is a glimmer of a possibility that his monarchist movement would be able to garner at least some popular support among Iranian citizens chafing against repressive religious leaders. Instead, ironically, most prominent regime change pundits back the Mojahedin Khalq. And although this puzzles many (the MEK are so deeply unpopularinside Iran that it would be wilful stupidity to believe the group could seize power even with American support), the reason is quite simple. Even Iran’s enemies don’t want regime change.

Every year when the self-styled ‘Iranian Resistance’, aka the Mojahedin Khalq, holds its annual gathering at Villepinte near the French capital, there is a weary sense of déjà vu. It’s not only that the same paid speakers – John Bolton, Rudi Giuliani, Saudi Arabia’s Prince Turki and other lesser political personalities – appear on the platform with sad regularity. It’s not only that the whole audience, bar the MEK’s own fanatical followers, is made up of rent-a-crowd, bussed in as part of a cheap weekend holiday trip. It’s not even the conspicuous splurge from an apparently bottomless pit of money to hold the event.

The déjà vu arises from the elephant in the room which visits every event. Behind the glitz and glamour – and nobody loves glamour more than Maryam Rajavi – lurks the reality that regime change in Iran is not happening anytime soon and nobody in that room really believes it will either. And certainly, nobody is under any illusion that the MEK could make it happen.

It is easy to decipher the signs that the MEK is no longer working toward regime change. The MEK’s notoriously expensive propaganda aims only to promote the MEK brand. The group, under de facto leader Maryam Rajavi – is currently advertising its election of a female Secretary General, Zahra Merrikhi Ahangar Kala’i. (It is difficult to keep a straight face when the totalitarian MEK cult claims to hold elections.)

But it is not engaged in any other activity aimed at destabilising or endangering Iran. Even the MEK’s alleged involvement in the Daesh attacks on Tehran is more about attracting sponsorship money than precipitating the fall of Iran’s government.

As the West is cruelly aware, an active terrorist group aggressively recruits to swell its ranks. The MEK has not recruited for two decades. The mean age of its members is over 60 years, many are feeble and sick. Indeed, well over a thousand members have abandoned the organisation since 2003 when the group lost its main benefactor Saddam Hussein. This trend has increased since the group was forcibly transferred from Iraq to Albania. The group is disintegrating in all but name. This is not a force for regime change.

But this is exactly why politicians, retired government officials and others are lining up to promote the group. Advocating for the MEK allows them to rant and threaten and provoke ire among Iran’s leaders and hatred among the citizens. Safely.

While it is by no means clear that Donald Trump actually wants war with Iran – given the huge risks involved for the whole region – his strategy of brandishing the threat to destroy the JCPOA is certainly an attention-grabbing negotiating tactic. So too is brandishing the MEK as a terrorist threat against Iran. It is one of the cards which the anti-Iran pundits feel they can bring to the table. Promoting the MEK is about shuffling and arranging the negotiating cards because nobody, not even Iran’s enemies wants to pay the price of actual regime change.