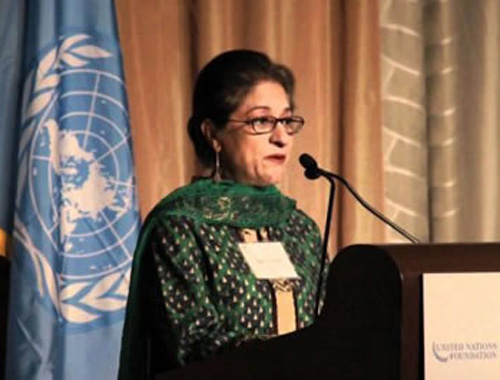 Iranian Judiciary Chief Ayatollah Sadeq Amoli Larijani has dismissed a recent report by a UN rights rapporteur against the Islamic Republic, saying it reflects the views of the country’s enemies.

He added that the report supported those individuals who had been tried and convicted of espionage and also the MKO elements who had carried out various acts of terror against the Iranian people.

The top Iranian judiciary official strongly criticized the West’s double-standard approaches in dealing with the issue of human rights in Iran and said while different resolutions have been adopted against the Islamic Republic, Western countries have prevented the adoption of resolutions by world bodies against the Israeli regime or the “child-killing” Saudi regime.

“The US and Europe … support a spy, but keep silent about the mass killings in Yemen and the blockade of Gaza and heavy bombardments [of innocent people],” Amoli Larijani added.

Asma Jahangir, the UN special rapporteur on the human rights situation in Iran, submitted her report to the world body on Wednesday.

Speaking to reporters on Thursday, Jahangir claimed that there had been little change in the human situation in Iran over the past year.

She also alleged the harassment of journalists in Iran had intensified, claiming that the progress on women’s rights was extremely slow.

Jahangir stated that she did not attempt to assess the impact of sanctions on human rights in Iran in her report, because she had not been allowed to visit the country.

Iran says it will welcome Jahangir if she wants to visit the country provided that human rights rapporteurs would also be appointed for the other 192 member countries of United Nations.