“The Fox program [of May 8, 2005] on Iran is simply the latest example of how the U.S. media has traded political favoritism to the White House, and its fierce demonization of Iran, for objective news.”—Kaveh L. Afrasiabi [1] 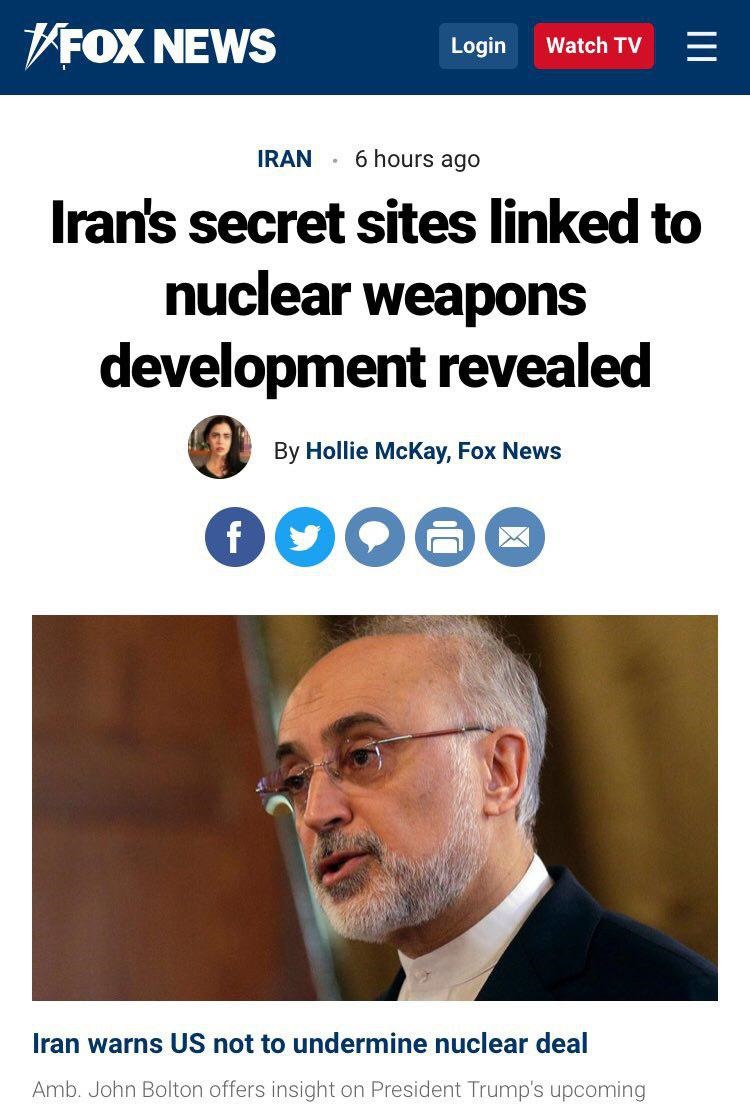 After more than a decade of dire warnings by Washington’s neocon war hawks of the Iranian nuclear “threat,” most of the civilized world rejoiced when the Joint Comprehensive Plan of Action was signed by Iran and the P5+1 in 2015. Hopes for gradually thawing relations between the Islamic Republic and U.S. were short-lived, however, with the ascendancy to the White House of Donald Trump, who unceasingly railed against the so-called Iran nuclear deal during his campaign. Now once again, Iran is being accused by the U.S. media of covertly pursuing nuclear arms. [2]

In an exclusive article, Fox News has announced that the National Council of Resistance of Iran (NCRI), a political front organization for the Mujahedin-e Khalq (MeK, MKO), has once again managed to obtain “intelligence” relating to a covert nuclear weapons program hidden skillfully from the peering eyes of the International Atomic Energy Agency’s inspectors. According to Fox News, the NCRI report, titled “Iran’s Nuclear Core: Uninspected Military Sites” and conveniently released days before the expected “decertification” of Iran by U.S. president Trump, claims agents of the MeK operating inside Iran have not only confirmed the existence of a covert nuclear weapons program in the Islamic Republic, but also have discovered an additional secret military base dedicated to building nuclear bombs.

While this may seem believable to poorly-informed Americans, the information bears a striking resemblance to the secret weapons facilities allegedly discovered by MeK agents inside Iran in 2002. In fact, the same person quoted in the Fox article, Alireza Jafarzadeh, wrote in 2005, “Based on information received from inside the country, the Iranian regime has started an extensive strategic plan in order to build tunnels and secret centers across the country, in order to hide its nuclear and missiles projects.” [3] Aside from being a Fox News commentator and “terrorism expert,” and he should be, given his background dating back to 1985 with the terrorist MeK cult, [4] Jafarzadeh is also president of Strategic Policy Consulting, which claims to “provide a wide range of consultancy on issues related to terrorism, weapons of mass destruction, Iranian internal and external affairs, as well as Iran’s role in Iraq.” [5]

Jafarzadeh gained notoriety in August 2002 when he held a press conference to present “evidence” of a nuclear weapons program in Iran. In his 2006 book titled “The Iran Threat,” which reads like a pulp-fiction spy thriller, he admitted that he has worked as a lobbyist for the MeK and even managed to convince 219 members of the U.S. House of Representatives to sign a statement in support of the NCRI. Jaferzadeh was particularly proud that George W. Bush gave the credit for discovering Iran’s “concealed nuclear program” to the NCRI, which Bush called “a dissident group.” [6]

The similarity of the current (2017) Fox News article and the 2005 press release is striking. For example, both speak of large underground tunnels: the present Fox News report speaks of “scores of large underground tunnels,” [7] while the 2005 press release reports on “large scale secret tunnels for weapons system [sic].” [8] Likewise, the same claims alleging that the military complex at Parchin, southeast of Tehran, houses a number of secret facilities supposedly used in the ongoing development and manufacture of nuclear weapons. In total, four locations are named: Natanz, Arak, Lavizan-Shian, and Parchin, which the NCRI claims “with high degrees of certainty” to be in some way involved with nuclear weapons research and development.

Jafarzadeh and Fox News have a long history of cooperation going back to 2003 when the self-proclaimed expert accused Iran of smuggling heavy weapons into Iraq “using trucks who [sic] were carrying vegetables and fruits, buses or utility vehicles, and they have been hidden in villages and agricultural fields to be used by them.” [9] More to the point, Jafarzadeh was already pushing regime change at that time, calling the Islamic Republic “the world’s leading state sponsor of terrorism,” advising the U.S. “to step up pressure” on Tehran, and insisting Iranians by the thousands were demonstrating “for regime change” and an “end to theocracy in Iran.” [10]

In an interesting 2005 Fox News interview pitting Joe Cirincione, director for Non-Proliferation at the Carnegie Endowment for International Peace, against Jafarzadeh, the latter claimed to have new evidence from unnamed sources proving Iran’s peaceful civilian nuclear activities were a cover for a covert nuclear weapons effort. Citing information that Iran was developing a neutron initiator using polonium-210 and beryllium-9, Jafarzadeh claimed “Iran is actually working to develop a nuclear trigger, which is a necessary part of building the bomb.” To his credit, Cirincione, referring to the NCRI, emphasized, “The last couple of exposures that they made haven’t really born out.” Furthermore, Cirincione estimated that Iran was at least five years away from making an atomic fission bomb and pointed out that “after two years of inspections we haven’t found anything actually weapons related work.” [11]

Far from being new technology, modulated polonium-beryllium initiation to trigger neutron chain reactions was researched in the 1940s in the early stages of the U.S. atomic bomb program. [12] Also worth mentioning is the fact that India’s first atomic bomb tested on May 18, 1974 used a polonium-beryllium initiator almost identical to the one used in “Gadget,” the first U.S. nuclear device to be yield-tested on July 16, 1945 near Alamogordo, New Mexico. Away from Washington’s watchful eye, Indian scientists took two years to master manufacturing methods and handling techniques for the large amounts of polonium required to produce this type of neutron initiator. [13]

For Iran to attempt to amass the polonium and beryllium needed for a trigger would create an immediately discernable warning sign of proliferation. To date, no such credible sign has been detected. Furthermore, polonium-210 must be produced on an ongoing basis since it has a half -life of only four years, rendering any polonium-beryllium initiator ineffective within that period of time less than that. Even the “experts” associated with the NCRI in 2005 placed the lifespan of an alleged Iranian-designed initiator at 6 months maximum. [14] The point here is that any activity of this sort in Iran would certainly have been detected by IAEA inspectors long ago.

Unfortunately, Jafarzadeh and his ilk seem to have found a receptive audience in Washington, for Trump himself derogatorily referred to Iran thirteen times in his recent address to the United Nations General Assembly. Among his more amusing assertions, Trump stated, “Rather than use its resources to improve Iranian lives, its oil profits go to fund Hezbollah and other terrorists that kill innocent Muslims and attack their peaceful Arab and Israeli neighbors.” Noting the Saudi war on Yemen and the Israeli entity’s ongoing usurpation of Palestinian lands should suffice to discredit Trump’s remarks in reference to “peaceful Arab and Israeli neighbors,” [15] but what of the allegations of Iran’s support for “terrorists?”

Simultaneously funding an ongoing nuclear weapons program, if Iran indeed had one, as well as “terrorists,” as Trump has accused, would absorb a lot of money, and Iran is not awash in cash. With delays in integrating Iranian banks into the global banking system, Iran’s non-oil sector growth has been less than one percent, [16] leaving the country dependent on petroleum revenues subject to the volatile crude oil market and its persistently stagnant prices in the marginally profitable $50/bbl range. Yet somehow Iran has managed to reduce the poverty rate among its citizens from 13.1 percent in 2009 to 8.1 percent in 2013. [17] Obviously, this achievement of improving Iranian lives could not have been accomplished by diverting oil profits to nuclear weapons programs or funding extremist groups, as the Saudis have done and continue to do by pouring billions into spreading Wahhabism. [18]

Fox News has been quick to note that Maryam Rajavi, the leader of the NCRI, welcomed Trump’s bellicose remarks, which were in line with the Iranian people’s alleged desire for regime change. While this image of Iranians writhing under theocratic tyranny has much credence among U.S. pundits, the reality on the ground in Iran is quite the opposite. Within Iran, there is much popular support for the country’s nuclear program, and Iranians view their expanding homegrown nuclear technology with great pride. [19] Furthermore, surrounded by U.S. military bases in Afghanistan, Pakistan, Bahrain, the United Arab Emirates, Turkey, Turkmenistan and Kyrgyzstan, as well as U.S. military partnerships with Georgia and Azerbaijan, Iran rightly considers the U.S. to be its number one security threat. [20] Finally, it must be understood that with literally thousands of victims of its terror attacks inside Iran, the MeK has absolutely no credibility among the Iranian people as any sort of an opposition movement. [21]

Former political science professor at Tehran University, Kaveh L. Afrasiabi, warned, “A U.S. policy based on a caricature of Iran’s realities is obviously self-disserving.” [22] Nevertheless, the current caricature of a U.S. president residing in the White House seems determined to do just that based on recycled fake news about Iran supplied by Jafarzadeh and aired on Fox News.

[20] Seyed Hossein Mousavian, Iran and the United States: An Insider’s View on the Failed Past and the Road to Peace (New York: Bloomsbury, 2014), 272.

Yuram Abdullah Weiler is a former engineer educated in mathematics turned writer and political critic who has written over 130 articles on Islam, social justice, economics, and politics focusing on the Middle East and U.S. policies.

WHO IS MR. ALIREZA JAFARZADEH?