Jafarzadeh, front man for the MKO and the NCRI in the United States is introduced by fox news as an “independent person who runs Strategic Policy Consulting, a Washington-based think tank focusing on Iran and Iraq” 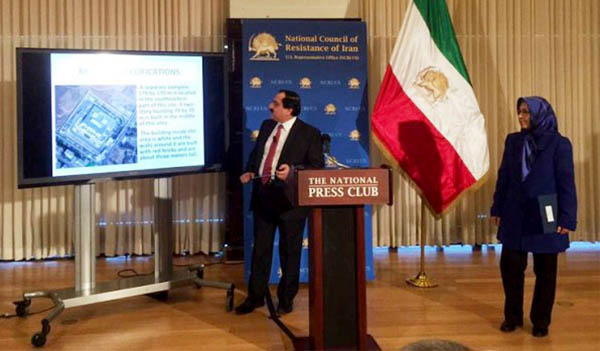 To quote from Answers.com:

Jafarzadeh’s name first appears in the media in a Houston Chronicle article dated December 24, 1986, where he is described as a spokesman for the MEK (Mujahedin-e Khalq). In the article he denied US State Department claims the MEK was a terrorist organization responsible for the assassination of at least six Americans in Iran. Jafarzadeh was the public spokesperson for the National Council of Resistance of Iran until its office in Washington was closed by the US State Department in 2002 on the grounds that it was a front group for the MEK, by then listed as a terrorist organistion.

Alireza Jafarzadeh was born in Mashad (Iran) and moved to the USA before the 1979 revolution in Iran. He began there as a student of Civil Engineering. But he soon became engaged with the Mojahedin Khalq Organization (MKO) in the US. The MKO is designated by the US, UK, EU and many other countries as a terrorist entity in part because of the MKO’s affiliation with the regime of Saddam Hussein. MKO activities include the massacre of Iraqi Kurds and Marsh Arabs in March 1991 after Gulf War I, and co-operation with Iraqi Intelligence in hiding WMDs from UN weapons inspectors. Jafarzadeh worked for the MKO in several countries including Iraq. He was promoted to the position of spokesman for the MKO in the US which then gave him a position as member of the Foreign Affairs Committee of the National Council of Resistance of Iran (NCRI), the MKO’s political wing, which is also designated in the US as a terrorist entity.

Jafarzadeh quickly became a devoted member of the MKO and on the order of the organization’s Ideological (or cult) Leader, Massoud Rajavi, married Robabeh Sadeghi of Babol, Iran, after she fled her country in 1986. In 1990, Massoud Rajavi ordered all MKO members to divorce for ideological reasons. Jafarzadeh and Sadeghi, were divorced on his command.

Jafarzadeh was such a committed member that he repeatedly volunteered for suicide operations. In the MKO publication No. 127, he is quoted as saying that he is ready to burn himself in front of the UN’s New York office whenever it is needed for the MKO’s cause.

In 1988, together with 15 other MKO members in the US, Jafarzadeh left for Iraq to participate in the Eternal Light military operation. He served in Hossein Abrishamchi’s military unit in Iraq and undertook terrorist training in an Iraqi camp called Zaboli Camp. After the MKO’s disastrous defeat in this operation, he was sent back to the US.

In a press conference on 24 March 1991, Jafarzadeh explained the details of one particular MKO operation in Iraqi Kurdistan (Operation Morvarid). This was soon exposed, by Human Rights Watch among others, as the deliberate massacre of Kurdish civilians by the MKO on the direct orders of Saddam Hussein.

Some months later, MKO radio announced Jafarzadeh had been made a Deputy Executive member of the MKO. His name along with his paramilitary rank was also published in MKO newspapers.

In 1992, with the help of Saddam Hussein’s Intelligence Service, Jafarzadeh traveled to Pakistan to negotiate and establish new relations between the MKO and one of the war lords of Baluchestan (on the Afghanistan-Pakistan border). The relation was established in order to facilitate sending terrorist teams into Iran for paramilitary terrorist operations. Jafarzadeh was the broker for this deal and in person paid some of the tribal chiefs on behalf of Iraqi Intelligence.

From 1998 Jafarzadeh has been introduced as a member of the NCRI (MKO) Foreign Affairs Committee. In 1992 he took part in interviews (including an interview with Voice of America Radio) as the NCRI representative.

Jafarzadeh also attended a meeting in Washington in 2001. The meeting was organized by the MKO to protest inclusion of their name in the US administration’s list of terrorist organizations. Jafarzadeh was the MKO’s speaker at this meeting to explain their position.

There are serious allegations that Jafarzadeh has been involved in illegal deals in the USA, including deals involving chemicals which can be used to produce WMDs. There are also allegations that the MKO, with him as its representative, have been involved in serious money laundering and drug trafficking in the USA. These allegations, as well as his and Fox News’ dodgy connections in Washington, are currently under investigation.

WHO IS MR. ALIREZA JAFARZADEH?