On the campaign trail, Donald Trump often denounced the failures of the US foreign policy establishment, including the trigger-happy Washington insiders who, too often, had led the country down the path of devastating wars. In particular, leading up to and since his election, President Trump has often invoked the example of the 2003 invasion of Iraq as a monumental mistake in contemporary US foreign policy. But, recently, President Trump appointed one of the architects of the Iraq war, John Bolton, to serve as his third national security adviser, replacing H.R. McMaster, a three-star general with a moderate outlook. Bolton’s track record in the nonproliferation space—as the undersecretary of state for arms control and international security affairs from 2001 to 2005, his brief tenure as the US Ambassador to the United Nations in 2005 to 2006, and his writings and media appearances in recent years—all point to the end of the nuclear deal with Iran and a generally more aggressive stance on the Islamic Republic. 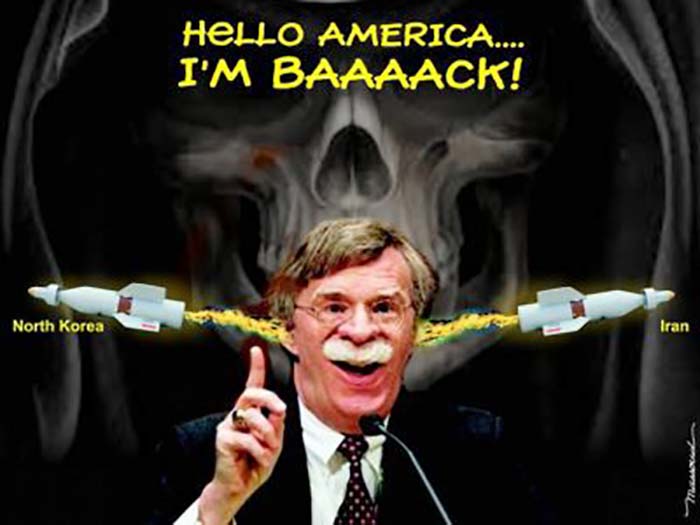 The Trump administration’s approach has largely been one of increased pressure. If a country’s foreign policy toolbox includes a number of tools, ranging from sticks to carrots, the President’s Iran policy has largely consisted of sticks. But the administration has so far only utilized some of these tools, mainly the adoption of harsher rhetoric, including denunciations at international fora, particularly as undertaken by Ambassador Nikki Haley at the UN Security Council, and sanctions and designations. Hence, so far, Washington has steered away from an all-out confrontation with Iran. The President has long expressed his opposition to the nuclear deal, and his administration has increased the uncertainty surrounding its future and refused to recertify the agreement. But the administration has so far decided not to pull the trigger and withdraw from the deal, as Trump had promised on the campaign trail. Several key administration officials can be credited with moderating the administration’s stance vis-à-vis the nuclear deal, including former Secretary of State Rex Tillerson, Secretary of Defense James Mattis, and McMaster.

But McMaster’s ousting and Bolton’s arrival, potentially coupled with Mike Pompeo’s ascendance at the State Department as Tillerson’s replacement, make it much likelier for the administration to pull out of the nuclear deal and potentially even confront Iran militarily.

To understand why this may be the case, it’s imperative to examine Bolton’s worldview, nonproliferation track record, and stance on Iran.

Bolton largely sees the US foreign policy toolkit through the prism of what most national security professionals view as the last resort: military action. Indeed, Bolton has long advocated for bombing countries to settle disputes and mitigate threats, before such options as negotiations, sanctions, and naming and shaming on the international stage are fully exhausted. In particular, Bolton famously called for attacking Iran to address the challenge stemming from the country’s nuclear ambitions—and this, as the negotiators were working toward a comprehensive agreement achieving strict limits on those ambitions. Likewise, Bolton has often brushed aside the need for multilateralism. In fact, Bolton seems to distrust and disdain negotiations, particularly those requiring American concessions. Multilateralism and the use of the broad American foreign policy toolbox—including incentives, economic and political pressure, the threat of the use of force, and diplomacy—were central to the nuclear talks and resulting agreement. And they also yielded more lasting results at a lower cost than military action would have entailed.

Bolton’s nonproliferation track record is predominantly one of missed opportunities and outright failures. He advocated for the US invasion of Iraq, based on the idea that Saddam Hussein’s regime had retained threatening weapons of mass destruction programs. As he put it then, Bolton was “confident” that Saddam was hiding such weapons facilities. While the Iraqi regime did have WMD programs and even deployed chemical weapons during the Iran-Iraq War (1980-88), that was no longer the case when America attacked the country in 2003. In fact, in a situation reminiscent of the Trump administration’s (and Bolton’s) stance toward Iran, international inspectors were on the ground in 2003 and verifying the state of Iraq’s WMD program, but they were not given a fair chance to complete their work and present their findings before the United States invaded. In fact, in a closer look at the developments leading to the Iraq war, one can spot many similarities between the claims presented by those arguing that time was ticking so the United States had to attack Iraq to prevent catastrophe, and the arguments put forward now by Bolton on Iran. Today, nearly 15 years after the start of Iraq war—where America still sees no end in sight—Bolton continues to support the conflict. And in another situation with parallels to the Iranian controversy, Bolton supported nixing the 1994 Agreed Framework with North Korea. While that agreement was nowhere as comprehensive and strong as the Iran nuclear deal, its collapse did lead to today’s standoff on the Korean peninsula, with Pyongyang possessing a small but growing nuclear arsenal that either has or likely will soon have the capability to hit the United States.

From these foreign policy failures, Bolton has concluded that the use of force and the abrogation of international agreements are the ways for the United States to achieve its goals—despite abundant evidence to the contrary.

But perhaps most troubling is Bolton’s cozy relationship with the Mujahedin-e Khalq (meK), an Iranian opposition group that he hails as a viable alternative to the Islamic Republic, a champion of democracy and human rights, and an agent for a change of behavior by Iran. But the MeK is neither a viable alternative to the current Iranian government nor a force for democracy and human rights, as I have written elsewhere. Instead, it’s a cult-like organization that has abused its own members and is already publishing lists of journalists for its sympathizers to target. It enjoys little support inside Iran and is responsible for a number of terrorist attacks on Iranians and Americans alike. Moreover, there’s no guarantee that the MeK would adopt a policy on the country’s nuclear program or other nefarious activities that is different from the current regime’s. More important yet, the very idea that regime change, Bolton’s preferred foreign policy option to deal with Iran, would be successful and yield a sustainable outcome is put in question by the legacy of the wars in Afghanistan and Iraq.

In that sense, Bolton’s worldview and approach to Iran differ from President Trump’s “America First” policy, which seeks to minimize American involvement in various theaters. But with moderate voices largely isolated and sidelined in the Trump administration, the nuclear deal’s days seem numbered and a potential confrontation with Iran likely.

It must be remembered that US intelligence community has found no evidence of nuclear weapon activities in Iran since 2009. Despite its shortcomings, the Iran nuclear deal has significantly scaled back Tehran’s nuclear program. By May 12, the president will have to choose whether to reissue waivers of the nuclear-related sanctions on Iran, as provided for in the nuclear deal. The administration has already indicated to European negotiating partners and the rest of the world that the President may refuse to do so if no “fixes” to the deal’s shortcomings, as outlined by the Trump team, are found. The administration may refuse to waive the sanctions without withdrawing from the agreement, or simply withdraw from it altogether. While neither scenario is ideal, the latter would be much more complex to rectify down the line than the former.

Indeed, if the deal collapses altogether—which, absent the United States, it will, whether it dies slowly, or immediately because Iran pulls out as well—the Iranians aren’t likely to return to the negotiating table for the foreseeable future. Indeed, as the winter 2017-18 protests in Iran demonstrated, the general public there is fed up with the country’s economic situation, and it increasingly views the nuclear deal as a series of empty promises made in exchange for real nuclear concessions by Iran. Regime hardliners regularly target President Hassan Rouhani and his team that negotiated the deal. And the deal has lost the support of key power centers, including the Supreme Leader and the Revolutionary Guards. The best approach to rectifying the agreement’s shortcomings lie in an option the administration has ruled out altogether: preserving the nuclear deal and building on it, by leveraging the channels of communication that resulted from it, to address other areas of concern in Iran’s behavior, including limitations on the country’s missile program.

For the time being, despite increased pessimism about the fate of the nuclear deal, the Europeans continue to have some leverage over and credibility in Iran—although their attempt to impose sanctions on Iran to appease the Trump administration and push it to preserve the deal may backfire. Whether the implementation of the agreement continues will largely depend on them. The Europeans must continue to engage Iran and preserve the channels of communication that are critical to deescalating the tensions likely to arise from the toxic combination of hawkish voices gaining prominence in Washington—now including John Bolton’s—and hardline pushback in Tehran.

Ariane M. Tabatabai is the director of curriculum and an assistant teaching professor of security studies in the Georgetown University…