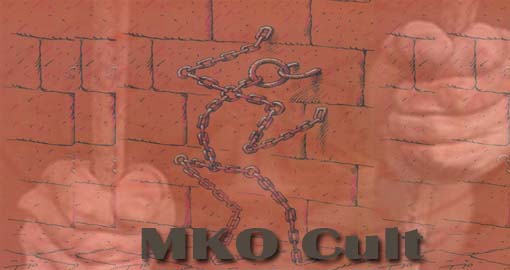 The Mujahedin Khalq Organization ( the MKO/MEK/PMOI/the Cult of Rajavi) meets certain aspects of features of modern slavery that are identified by the US State Department. However, domestic servitude is the one which seems to fit the slavery practices in the Cult of Rajavi more than the other forms do. The state Department explains,” Involuntary domestic servitude is a form of human trafficking found in district circumstances – work in a private residence – that create unique vulnerabilities for victims.”

These “district circumstances” have been ruling the MKO bases for over three decades. The rank and file of the group have experienced living and working in a private residence in camps Ashraf and Liberty, Iraq. They still lead this vulnerable life style after their relocation in Albania, Europe.

Although, the group members enjoy very restricted access to the outside world in Albania, the group authorities are seeking to close this very small opening; They relocated the members to a remote and isolated camp in Albania named “Ashraf Three”, reported Sahar Family Foundation. The new Camp seems to be exactly a container for what the State Department identifies “a crime in which a domestic worker is not free to leave his or her employment and is abused and underpaid, if paid at all.”

Massoud Khodabandeh who considers members of the MKO as “political slaves” voices the demands of families of the MKO members who have complained to the UNHCR and the Albanian government. In his new article on the Huffington Post, he writes, “They [families] said that many, perhaps the majority of MEK members want to leave the group but have nothing – no money, no place to go, no officially recognized status and no language skills – to help them do so. They are effectively being held in a state of modern slavery.”

The state department asserts that in a domestic servitude system, the ability to move freely is often limited, and employment in private homes increases the isolation and vulnerability. According to such definition, victims of the cult of Rajavi are very vulnerable because of the isolating controlling system of the group that has enslaved them since their recruitment. Testimonies of former members of the group indicate their firsthand account of “various forms of abuse, harassment and exploitation” they underwent in the Cult of Rajavi.

The state Department suggests:”these issues taken together, maybe symptoms of a situation of domestic servitude when the employer of a domestic worker has diplomatic status and enjoys immunity from civil and/or criminal jurisdiction, the vulnerability to domestic servitude is enhanced.”

The above-mentioned situation is exactly dominant in the Cult of Rajavi. “ Under a Secret agreement struck between American, the government of Albania and the MEK leader, the UNHCR supervised the transfer of approximately 3000 MEK from Iraq to Albania not as refugees but on a ‘humanitarian basis’,” writes Khodabandeh. In other words members of the Cult of Rajavi have no official status in Abania. Thus, they are more susceptible to modern slavery particularly domestic servitude in the cult-like MKO.

Having relocated in Ashraf Three, the MKO members’ defenselessness to violations of human rights that are committed in the MKO on daily basis, will be surely enhanced.

Human rights bodies should be aware of a likely humanitarian catastrophe in the heart of Europe. 3000 members of the cult of Rajavi can be victims of filthy deals between governments.