Bill Kristol was not altogether pleased with with last week’s announcement of the appointment of John Bolton as Donald Trump’s next national security advisor. Indeed, Kristol, who remains probably the single most influential figure in the increasingly fractious neoconservative movement, expressed some serious discomfort about the appointment in a Weekly Standard Interview with Charlie Sykes last Friday.

I agree with you. With Donald Trump as president, it makes me nervous. I like John Bolton, I respect John Bolton, but I’ve got to say that John Bolton as national security advisor is a little nervous-making. 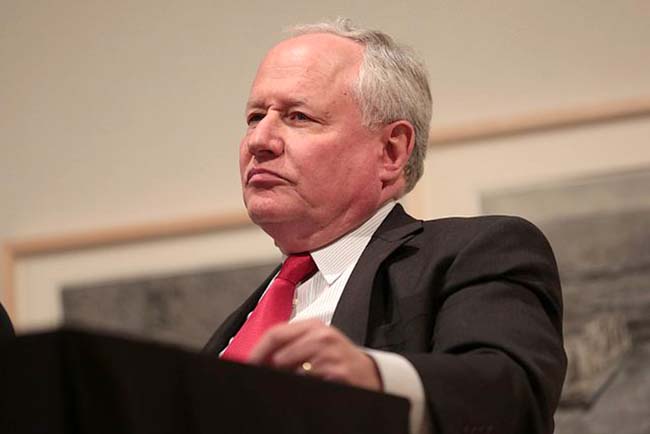 In the interview, Kristol argues correctly that Bolton is not a true neoconservative and is much more of “a national interest, America-First kind of guy,” adding that he ”will be a little more of a reinforcer of Trump and a little less of a restrainer of Trump.” This prospect clearly chills him given what Sykes described as the president’s “darker, more impulsive tendencies.”

Kristol also noted, significantly, that, with respect to the Iran nuclear deal (Joint Comprehensive Plan of Action or JCPOA), “he’s much more of a get-rid-of-the-deal, rather than a fix-the-deal kinda guy.” Kristol is thus following the lead of the Foundation for Defense of Democracies (FDD), the most generously funded and active of the anti-Iran groups, which is worried that an abrupt, unilateral U.S. withdrawal—as opposed to its gradual, hollowing out—from the deal would backfire and isolate Washington from its European allies in particular.

Kristol, along with his ideological confreres, campaigned hard against the JCPOA and has always taken an extremely hawkish line toward Tehran. That he is now worried about Bolton should send a strong message to both Democratic and Republican lawmakers in Congress who will not have the chance to vote on his appointment.

(Of course, senators will have the opportunity to vote next month on Secretary of State-designate Mike Pompeo, whose opposition to the nuclear deal has been just as fervent as Bolton’s. Indeed, the two men appear to hold nearly identical views on foreign policy generally with the exception that, unlike Pompeo, Bolton doesn’t claim divine sanction for his preferred policies and, unlike Bolton, Pompeo avoids going out of his way to alienate or humiliate people. I believe that a vote for Pompeo equals a vote for Bolton equals a vote for war, because I think some form of aggressive military action under this team is highly likely unless Pentagon chief Jim Mattis and the Joint Chiefs can somehow prevail against the duo and Trump’s “darker, more impulsive tendencies.”)

Kristol’s concern about Bolton is clearly shared by at least some of the “NeverTrumpers,” including many national-security neoconservatives who strongly opposed Trump’s rise within the Republican Party. Many of them signed a letter way back in March 2016 that called Bolton “utterly unfitted [sic] to the office” of the president due to, among other things, his temperament, his Islamophobic and anti-immigration positions, and his isolationist, “America First” rhetoric and tendencies. They were also never wild about former Secretary of State Rex Tillerson, whose ties to Arab monarchies and Russia were always a source of suspicion.

NeverTrump pundits have mostly maintained their opposition to the administration despite the appointments of both Pompeo and Bolton, with whom they have long been closely allied in their hostility to Iran and the JCPOA, as well as their fervent support for the right-wing Likud-led government in Israel. Besides Kristol, those who have spoken out against Bolton have included The Washington Post’s Jennifer Rubin, who wrote that Bolton’s appointment “should be a wake-up call to Republicans who always assumed wise, calm advisers would be there to constrain Trump” and who urged Republican and Democratic lawmakers to start “reclaiming Congress’s power, for example, by declaring that congressional authorization is required for a first strike on either Iran or North Korea.” Max Boot described Bolton as a “wild man” characterized by “ideological extremism.” Even David Frum, whose co-authorship with Richard Perle of the 2003 Islamophobic, anti-State Department/CIA screed, An End to Evil, was very much an endorsement of Bolton’s worldview, displayed a distinct lack of enthusiasm. As he wrote in The Atlantic:

The Bolton appointment, however, could be seen as the strangest Trump surprise yet. Remember, Trump campaigned as the candidate of anti-interventionism. He sneered at the foreign-policy views of rivals like Jeb Bush, Marco Rubio, and Ted Cruz: “I don’t even call them hawks,” he told three reporters from The Washington Post in September 2015. “I call them fools.” But of course, those were John Bolton’s views, too.

At the same time, however, some NeverTrumpers show signs of reconsidering their position in light of Bolton’s nomination despite their distaste for the president himself. After all, like them, Bolton disdains the United Nations, hates the Russians, and loves Likud.

Thus, Bret Stephens, perhaps the most eloquent NeverTrumper, praised Bolton’s contempt for Turtle Bay in a column last week and more recently depicted Bolton as a welcome antidote to Trump’s America First tendencies. “I think someone like Bolton is going to restrain the isolationist impulses that have been really at the heart of Trump’s foreign policy thinking,” he told The Hill. Another neoconservative and NeverTrumper, Michael Rubin of the American Enterprise Institute (where Bolton has been perched when not in government), insisted that, “In terms of organization, intellect, fairness, commitment to process, and a desire to get the best possible outcome for the United States with whatever cards he is dealt, Bolton could be the best national security adviser in a generation.” This is truly remarkable given Rubin’s past denunciations of U.S. supporters of the Mojahedin-e Khalq (MeK), the cult-like Iranian opposition movement of which Bolton has been one of the most prominent (and presumably well-paid) promoters.

One key neocon, Elliott Abrams, who was never formally part of the NeverTrump movement but who Trump vetoed for the post of deputy secretary of state early last year, has offered fulsome praise for Bolton’s appointment. “I’m delighted. John is a friend and former colleague,” he emailed Haaretz last week. “He’s extremely smart and he is an excellent and forceful bureaucrat. I think the combination of Pompeo and Bolton will serve the president and the country very well.”

Abrams has been anglingfor a senior position in this administration for more than a year now, and the ascendance of both Bolton and Pompeo could very give him the opening for which he’s been waiting. Although he avoided signing letters identified with the NeverTrump movement, Abrams is very close to many of the individuals who did. Indeed, his entrée into the administration would no doubt persuade some NeverTrumpers, particularly those who have been most appreciative of Trump’s virtually unconditional support for Benjamin Netanyahu and his right-wing government, to not only tone down or cease their complaining, but to actually join his administration. After all, the new foreign policy team has a very weak bench. An influx of neoconservative veterans of the George W. Bush administration could deepen it in ways that Trump sorely needs.

If Abrams manages to join the team, it would resurrect the tripartite coalition that drove the U.S. to invade Iraq in 2003: aggressive nationalists led by Bolton, neoconservatives led by Abrams, and the Christian Right led by Pompeo.

Thirteen months ago, Kristol himself tweeted about Abrams and Bolton amid speculation about who would get the deputy secretary of state post:

For what it’s worth, I’d say what’s needed [for deputy secretary of state] is broad government experience. They won’t (presumably) take Abrams. How about John Bolton?

If Abrams is soon brought in, Kristol might feel better about Bolton.

Angelika Beer: MKO illegal outfit in UK, US and EU.

The MKO, proxy force against Iran?