Former Prime Minister Stephen Harper is taking criticism for appearing at a Paris event sponsored by MEK, an Iranian dissident group that Harper’s own government considered a terrorist organization as recently as 2012.

“Thank you for your long battle for a free and democratic Iran,” Harper told a crowd at the Free Iran rally in Paris on Saturday.

The event was organized by the National Council of Resistance of Iran, a group founded by Mojahedin-e Khalq (MEK), a well-funded Paris-based group devoted to the overthrow of the current Iranian regime.

Even among voices opposing the Iranian regime, however, the group is controversial for its extremism, cult-like leadership and history of violence.

Thomas Juneau, a University of Ottawa professor and former Department of Defence analyst, wrote that Harper “openly supports a former terrorist group, a cultish, undemocratic, completely illegitimate group that is NOT, in any way, an alternative to the current regime in Iran.” 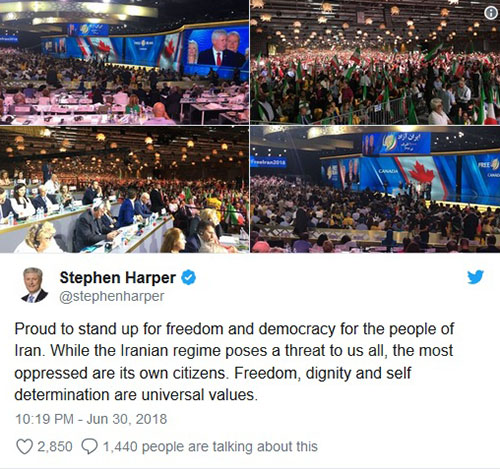 Farzan Sabet, an Iranian policy expert at Stanford University’s Center for International Security and Cooperation, said Harper’s attendance “speaks to the sophistication of MEK political operations, and naivete or venality of Western politicians who chose to attend.

However, a spokeswoman for Harper defended his appearance, noting that the former prime minister did not specifically endorse an MEK-ruled Iran. 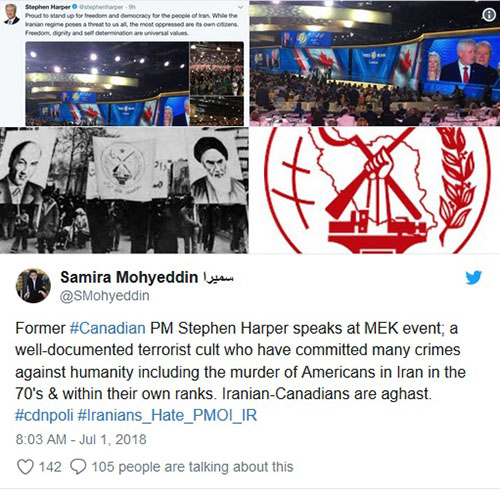 “The Free Iran event was attended by thousands of Iranian dissidents, from all political backgrounds from around the world,” said Anna Tomala with Harper & Associates. “Mr. Harper has not, and will not, endorse specific political movements or candidates.”

Founded in the 1960s, MEK (also known as the People’s Mujahedeen of Iran) was among the dissident groups that helped to overthrow the Shah of Iran in 1979.

However, it quickly broke with the country’s new Islamic regime, leading to decades of violent opposition. This included terrorist attacks and assassinations within Iran in the 1980s, as well as a close alliance with Saddam Hussein that saw MEK members fighting for Iraq in the Iran-Iraq War. 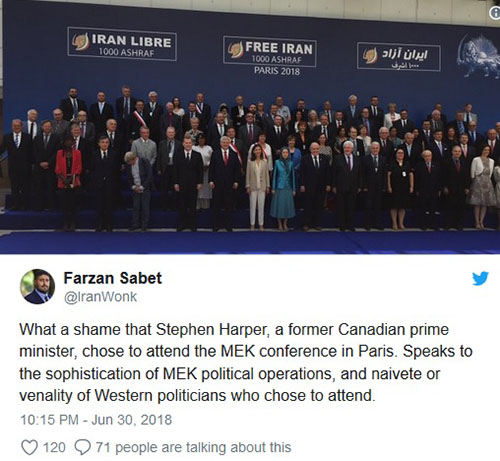 MEK was also implicated in a series of 1970s-era assassinations of American workers and soldiers in Iran, although the group has blamed those killings on a rogue Marxist splinter faction.

Samira Mohyeddin, a Canadian journalist a vocal critic of the Iranian regime, has called the group a “well-documented terrorist cult who have committed many crimes against humanity.”

MEK has since renounced violence, helped in part by the forcible disarming of the group following the U.S. invasion of Iraq in 2003.

Both Canada and the United States removed MEK from their roster of terrorist organizations in 2012, although a statement from the U.S. state department at the time said they still had “serious concerns about the MEK as an organization, particularly with regard to allegations of abuse committed against its own members.”

The group has frequently been criticized for demanding cult-like devotion to its leaders, the married couple Massoud and Maryam Rajavi.

A 2009 analysis by the RAND Corporation wrote that the group engages in “public self-deprecation sessions, mandatory divorce, celibacy, enforced separation from family and friends, and gender segregation.”

Speaking to Vice in 2014, former member Masoud Banisadr, who once served as spokesman for MEK, said the group imposes a “black-and-white world view” on its members.

“I remember a guy who said, ‘My brother works in the Iranian embassy in London. Before I loved him as my brother, now I hate him as my enemy. I am ready to kill him tomorrow, if necessary.’ And everyone applauded,” said Banisadr.

Massoud mysteriously disappeared after the 2003 U.S. invasion of Iraq, but Maryam remains a visible MEK representative. Official video feeds of Harper’s speech frequently cut away to show the reaction of Maryam Rajavi, seated in the audience. 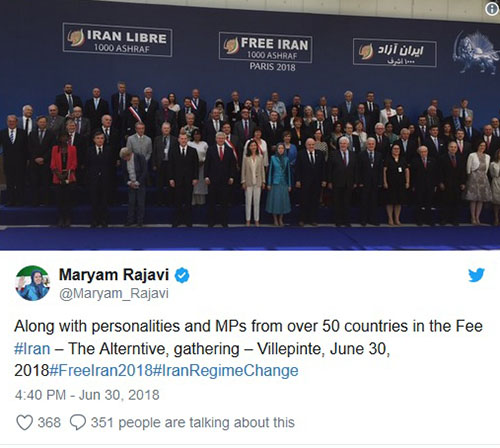 With Maryam Rajavi referred to as “Iran’s future president,” the National Council of Resistance of Iran frames itself as Iran’s parliament-in-exile and the chief driver of democracy in the country.

In a 2011 public letter, however, a group of Iranian academics dismissed these claims, and asserted that they were undermining legitimate Iranian democratic movements.

“The MEK has no political base inside Iran and no genuine support among the Iranian population,” they wrote, adding that the Iranian regime has justified crackdowns on pro-democracy protesters “by associating them with this widely detested group.”

Harper was a vocal opponent of the Iranian regime during his 10 years as prime minister, and said nothing in his Free Iran speech that he has not previously put on the record.

“Iran is presently ruled by a despotic, anti Semitic regime … it should not be a surprise to see him speaking against the regime,” said Harper spokeswoman Anna Tomala.

For much of his address, the former prime minister denounced Iran’s repressive policies and listed his own anti-regime moves as prime minister, including listing Iran as a state sponsor of terror and severing diplomatic relations with the country’s government.

“We closed the Canadian embassy in Iran and told the mullahs to get out of Canada!” he said.

The National Council of Resistance of Iran has held many similar rallies in Paris, often to the chagrin of the French government. In 2014, the French Foreign Ministry denounced MEK for “its violent and non-democratic inspirations” and “intense campaign of influence and disinformation.”

This is complete delusion. The Islamic Republic will (unfortunately) still be there next year. And if or when it goes, the MeK will only continue to do what it does – flashy adds in rightwing newspapers, shiny conferences – but it will not have any role in Iranian politics. https://t.co/LeePjatgB2 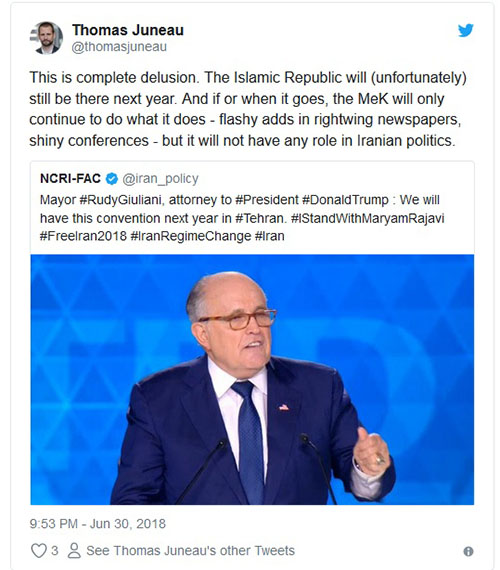 Given the sheer size of the weekend’s Free Iran rally, MEK certainly has no problem attaining substantial funding. The group also remains a hated enemy of the Iranian government. Prior to the Paris event, Belgian police arrested three people — including an Iranian diplomat — suspected of plotting a terrorist attack against the gathering.

According to a 2011 analysis by the New York Times, American political figures are well-compensated for their appearances at MEK events, with speaking fees ranging as high as US$50,000.

The Trump administration was quick to distance itself from Giuliani’s comments, however. “He speaks for himself and not on behalf of the administration on foreign policy,” State Department spokeswoman Heather Nauert said Monday.

Who is the Iranian group targeted by bombers and beloved of Trump allies?

Rajavi’s Show In France Distracts From Sinister Death In Albania