In the first part of theses series of articles, traumatic experience of Gholam Reza Shokri was covered as one of the numerous cases of human rights violations that has taken place in the Mujahedin Khalq Organization ( The MKO/ MEK/ PMOI/ Cult of Rajavi).

According to the Human Rights Watch report “No Exit”, in the early 1990s, dissent was on the rise Camp Ashraf. Former MKO members interviewed for this report cite the following reasons for their decision to leave the organization: military failure of the MKO to dislodge the Iranian government during the July 1988 military operation, forced mass divorces instituted as part of the “ideological revolution” and their persecution and torture by the MKO operatives during “security clearances” in 1994-1995.
According to the HRW report, “human rights abuses carried out by MKO leaders against dissident members ranged from prolonged incommunicado and solitary confinement to beatings, verbal and psychological abuse, coerced confessions, threats of execution, and torture that in two cases led to death”.
1994-1995 marks the most horrible stories of torture and human rights abuse in the MKO’s Camp Ashraf, Iraq. Jamal Azimi (Known in the MKO as Majid Kaviani) wrote his tremendous memoirs of witnessing verbal and physical abuse in Camp Ashraf in 1994 (1373 Persian calendar).

Azimi is one of those reportedly 700 members of the MKO who were imprisoned and tortured in the project of “security clearance” during the 1994 to 1995. “The suppressive project was so huge that Rajavi could not launch it without preplanning; torturers and murderers should have been indoctrinated to operate Rajavi’s scenario,” Azimi writes.

He recalls that one of the female commandants named Sister Zarin called on all members to the eating place and spoke of the organization’s decisions for some cross border operations. “Everyone was nervous looking at each other in wonder and anxiety,” he writes.
The process of taking the rank and file to an unknown place was started the same night. “Assadollah Mosana came over and took one of the comrades,” Azimi recalls. “Two people took his locker to the other place. The process went on. Every night one or two people were removed from our unit. The unit became almost empty.”
Finally, it was his own turn. Assadollah called on Azimi and told him that Sister Zarin wanted to see him. In the new place he had to take map reading lessons. “The class was so boring. I had passed such courses several times… After some time the class was not as crowded as the first days. No one knew about the fate of the absentees.”
Azimi had no idea that those members had been taken for interrogation and torture in groups until the night that Sister Mehri called on him and his friend (nicknamed Ali) and told them that they had to go to the internal unit. “Hadi picked us up in his jeep and took us to the Street No. 100 [of Camp Ashraf]. We were thrown in a room of an abandoned building. They treated us so harshly…nothing was normal… we trusted the leader and our commandants so much that we guessed that they wanted to examine our devotion to the group,” Azimi recounts.
Finally Jamal was taken to the interrogation room where a superior member called Fazel started shouting at him: “You are a spy of the regime!”.
This was the accusation for all those 700 people. Azimi was shocked because he had joined the MKO on his own will. He had devoted his whole life to the group’s cause. “I could not believe that I was labeled as a spy after those many years of devotion to the Mujahedin,” he writes.
Azimi and Ali were then transferred to jail. “At midnight we heard loud screams. Someone was being beaten by others.” He recalls his memoir of the first night at the MKO prison. “It lasted for half an hour. We were listening to the sounds of scream and beating in fear and worry looking at each other. No one dared to speak. The screams ended. Ten minutes later, Mokhtar and Aadel [the two torturers that Jamal Azimi had seen as comrades before getting imprisoned] hurled a man in the cell and closed the door. He was unconscious. His nose and mouth were bleeding. His face was swollen and bruised.”
Jamal Azimi suffered the most terrible conditions of food, sleep and health in the MKO prison together with his six co-prisoners. All night long they heard prisoners whining from other cells. The prison guards –their former friends—treated them so terribly that no one could dare to ask why such a treatment.
After a dozen of days, once more, with tied hands and closed eyes, they were transferred to a place in Camp Ashraf called Castle No. 200. They were settled in a big room that housed 20 people. “The room was very dirty, full of garbage, dust and human’s stool. It smelled very bad,” Jamal writes.
“In the entire days I spend in Rajavi’s jail, I saw tortured people whose face was not recognizable because of too much beating,” he says. “I couldn’t believe my eyes. I could not realize such atrocities against my friends.”

One of the tortured ones had been in the same unit that Azimi was. Azimi got close to him and asked him what the problem was. He was so terrified that he could not open up. Finally he said, “They wanted to force me to admit that I am the spy of regime but I did not admit such a false accusation.”

“What did they beat you with?” Azimi asked the bleeding man. “With wooden sticks, cables and Brother Hekmat beat me with a sleeper,” he replied.

This was a technic to intimidate other prisoners. Everyone in the cell was worried waiting for his turn to get tortured. Jamal Azimi was not tortured personally but he witnessed his comrade’s pains and sufferings after they were physically tortured by the MKO authorities. “I think if the group had the possibilities, they would have involved all members in their “security clearance” project,” Azimi suggests. “I do not know the exact number of members who were imprisoned and tortured in this project. After it was finished comrades would estimate different numbers, but most of them agreed on 700.”
In his opinion, Security Clearance was Rajavi’s tactic to silence any voice of dissent in the group. Rajavi seemed to be planning for an establishment in which no one would be allowed to express his/her criticism or opposition against the group’s leadership and strategies.
Mazda Parsi 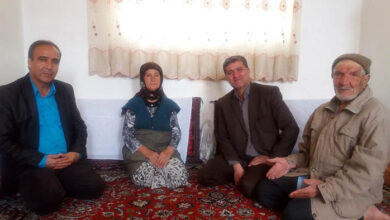 I have vowed to God, not to die till I visit my son

Baghdad to Exert Pressure on EU to Expel MKO