Mr Manoucher Abdi is an Iranian citizen, who many years ago became a part of the MEK (Mojahedin-e Khalq), a revolutionary, formerly terrorist, organization currently characterised as a cult. After many vicious conflicts with various powers in Iran (the Pahalvi monarchy and later the Islamic Republic of Iran) this organization was removed from the list of terrorist organizations. In 2013, in the last months of Berisha’s government, several hundred fighters from this organization came from Iraq, where they were accommodated as allies of the dictator Saddam Hussein in Albania with the official status of UN-protected persons. During the years of Prime Minister Rama several thousand members of this organization (from 2000 to 4000) came to Albania from Iraq, but also from other countries such as Bulgaria. The organization claims that from its Albanian base called Camp Ashraf 3 it continues to carry out a fierce fight against the legitimate government of Iran, which the MEK calls the mullah’s regime of Tehran. Several dozen MEK members have deserted the ranks of the organization citing the case that Rama’s government supports MEK, the cult of Madam Rajavi which supported Saddam Hussein in Iraq. These frustrated, disenchanted MEK survivors continue to live in Albania and the UNCHR pays some money for their survival. Some of them, often financially supported by the MEK itself, have managed to leave Albania and illegally enter various EU countries.
One of the MEK defectors is Mr Abdi Manoucher, born in 1963. For Manoucher the ideals and aspirations of the MEK cult belong to the past. He simply wants to spend the remaining years of his life with his daughter, whom he has not seen for 15 years.
Despite Manoucher’s past, the Iranian authorities have officially stated that they will not hinder his return to his family home in Iran. We remind readers that in September 2013 PM Berisha in a meeting with the then Iranian ambassador in Tirana, Majid Mozafari, emphasized the fact that the Albanian government guarantees that any of them (Mojahedin), who have the full guarantee of the Iranian authorities and wants to return to his country, will face no obstacle from the Albanian authorities. (more can be consulted link: http://arkiva.km.gov.al/?fq=brenda&m=neës&lid=18617).
Berisha’s successor, the current Prime Minister Edwin Rama, is doing exactly the opposite. The Albanian authorities are hindering Manoucher’s return to the bosom of his family in Iran. Despite his repeated requests, Manoucher is prevented from returning to his homeland just to fulfil a whim of Maryam Rajavi, leader of the MEK cult organization. To this arbitrariness of the Albanian government, Manoucher has responded with the only tool that he has: a hunger strike. With a letter to the UNHCR, the Foreign Ministry of Albania, the Albanian Interior Ministry and Prime Minister Rama on 1 April 2019 he has informed them of his decision to start a hunger strike in order to persuade the Albanian government to allow him to return to his family home in Iran.
Such a servile attitude of the Rama Government towards Madam Rajavi goes well beyond the servile positions of the Libohiva quisling government versus Jacomoni, the Emperor King Vittorio Emanuele III. Albania was then a country occupied by fascism, and today it is a free, sovereign country, a NATO member and an aspirant for EU membership, but unfortunately with a prime minister, both myopic and servile.

Counterproductive action of Rama Government
Holding the grandfather Abdi (Manoucher) hostage in Albania is not only a cowardly and disgusting act by Rama’s government against a stateless man on behalf of Madam Rajavi, but is also completely counterproductive and with negative consequences for the Rama Government.
I hope that Mrs Fu-Fu, who covers public relations for the prime minister, will explain to Prime Minister Edvin what a “debacle” regarding public relations it will be for the Albanian Government as Abdi’s hunger strike, among other things, is reflected in foreign and world media, starting with the Danish Dagens Naeringsliv, France’s Le Monde, Italy’s RAI and the US’s Wall Street Journal.
Prime Minister Edwin must also be aware that unlimited servility towards Madam Rajavi will not be enough for the well-paid lobbyists of these stateless people’s efforts to get Mr Rama a 3-4 minute meeting with President Trump at the Oval Office. Such a “coup de main” at the height of the electoral campaign will simply remain a pipe dream which does not even have the slightest chance of becoming reality.
In my article I am not appealing to the human feelings of my country’s prime minister, but merely his sound judgment. Keeping an Iranian grandfather hostage in Albania will not bring any benefit to the prime minister but will be a source of endless trouble in the field of public relations. I humbly remind Mr Edvin that the words of MP Majko or ex-professor Klosi, Grida, Salianji & Co, that do not even go down the toilet, make his own cruel decisions for grandfather Abdi bad news for Prime Minister Edvin!
Gjergji Thanasi, Gazeta Impact, Translated by Iran Interlink 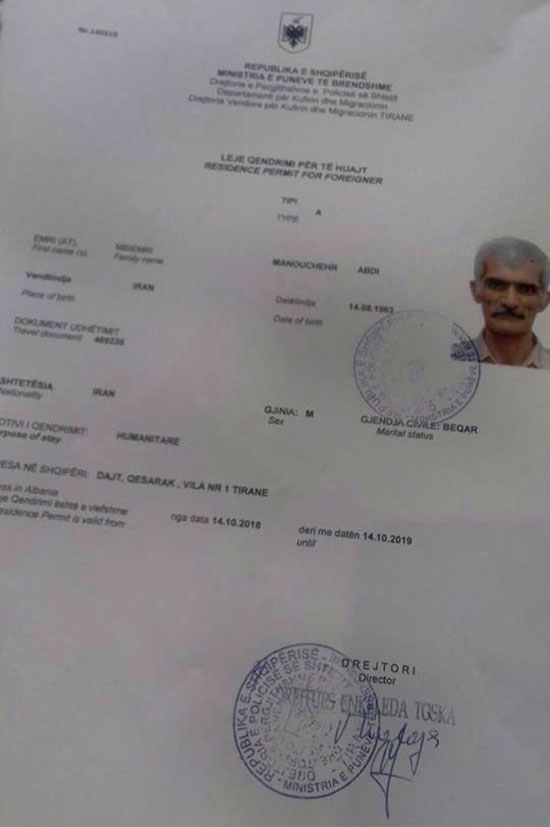 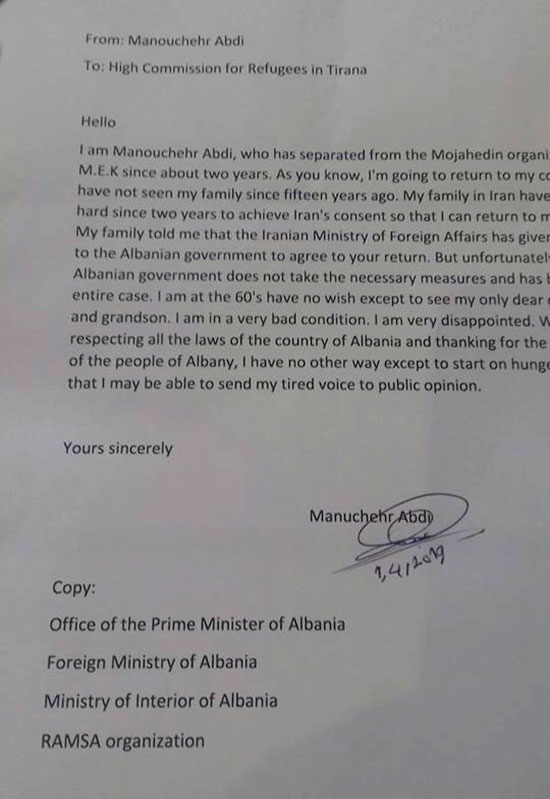 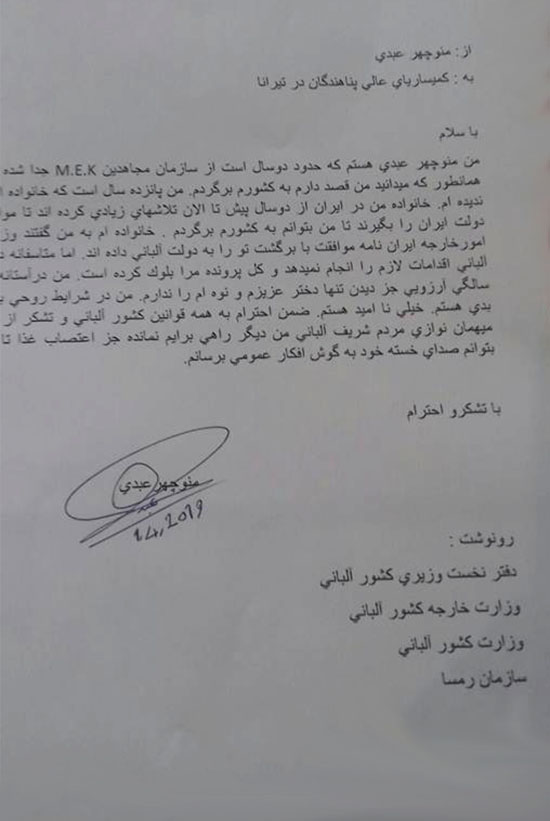