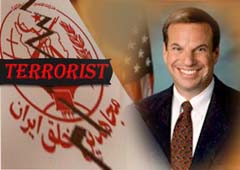 Mayor is mum on trip to Paris

San Diego Mayor Bob Filner just returned from Paris but declined on Thursday to answer questions about the travel or who paid for it.

Filner briefly told reporters at a news conference that the trip was not a “junket,” but a “business trip which is to get jobs to San Diego.”

He deferred further questions until a news conference he said he would hold Friday. U-T Watchdog has submitted public records requests for documents related to the trip, including the cost of travel for Filner’s city security detail.

A news release from the National Council of Resistance of Iran said Filner attended a group rally in Villepinte, France, near Paris.

“My first question is who is paying for all this?” Councilman Scott Sherman said. “I don’t get why a mayor of the city of San Diego would need to be there. I think he was beating feet as quick as he could to get out of town because of all the negative news media.”

Filner left town late last week amid several controversies, including his use of a bodyguard to remove a City Attorney’s Office representative from a council meeting last week.

Filner was also facing questions over a donation to the city from developer Sunroad Centrum Partners. Filner vetoed the builder’s request to modify a Kearny Mesa development plan and then later dropped his objection after the company gave $100,000 to the city for a veterans plaza and a bicycling event — pet projects of Filner.

Filner has previously accepted travel from groups that are part of the National Council of Resistance of Iran. He went to Paris in June 2011, as a member of Congress. He also took a similar trip in June of 2007, federal records show.

His 2011 trip cost $6,589 and was paid for by Colorado’s Iranian American Community, a group tied to the Mujahideen-e Khalq or MEK, the militant — and largest — arm of the National Council of Resistance of Iran.

That trip included a first class flight and a stay at a Marriott. Legistorm, a nonpartisan Washington DC-based organization that compiles information about Congress, including Congressional travel, noted, “This trip included unusually expensive hotel charges.”

During the mayoral campaign last year, Filner was criticized for accepting 16 free trips as a congressman, totaling $40,000. U-T Watchdog determined his travel was at the median for the county’s congressional delegation, that is, third highest out of five legislators.

He said at the time, “I plead guilty to doing my job as a congressman, informing myself about world issues, building relationships with world leaders and fighting for human rights.”

Congressman Bob Filner (Democrat—California) has succeeded for many years in duping conservative voters in his district. Now, he can add to his list of successes the duping of the left wing in the posted video interview with Marc Ash, Executive Director, Truthout.

Filner revealed his secret in this interview:“I learned how to frame issues.”

Voters should watch this video so that they can learn how to avoid being duped by political candidates in the future. Filner is truly a master of the art of duping voters.

Filner revealed in this interview that he has taken a consistent position on the Iraq War since the war started in 2003. The Iraq War is based upon lies. The Iraq War is illegitimate. America should not have invaded Iraq. America should withdraw most of the American military troops from Iraq immediately. America started the Iraq War for economic and strategic reasons. The presence of an American occupying force provokes most of the violence in Iraq today. The Iraq War has displaced 2 million Iraqis who have left Iraq and 2 million more Iraqis who have become refugees in Iraq. Large numbers of Iraqis and Americans are dying needlessly.

Filner noted that he is the chairman of the House Committee on Veterans’ Affairs. Unlike Hanoi Jane Fonda, who made ten radio broadcasts from North Vietnam attacking American soldiers during the Vietnam War, Filner has learned to take the position of supporting all wounded American soldiers who return from America’s illegitimate wars.

In framing his position on the Iraq War, Filner did not disclose these truths:

2. Supporters of this communist terrorist organization have committed terrorist acts in many countries, including in America.

3. The MEK has been on the State Department’s list of terrorist organizations since the administration of former President Bill Clinton.

4. In September 2002, the White House’s background paper included the MEK as a pretext for the Iraq War.

5. In January 2003, Filner’s name appeared in a full-page advertisement in the New York Times as a supporter of America’s communist terrorist enemies—the murders of American military officers and Rockwell International employees.

7. In June 2003, some members of the Rajavi Cult burned themselves to death to protest the arrest in France of a cult leader, Maryam Rajavi.

9. In 2007, supporters of the MEK communist terrorists paid for Filner’s trip to France so that he could meet cult leader Maryam Rajavi and speak at a rally of America’s communist terrorist enemies while American soldiers are dying in Iraq.

If you are searching for the truth, the full truth, and nothing but the truth, you will not find the truth at Truthout.