For a second straight year, former prime minister Stephen Harper spoke at a conference organized by the MEK, a controversial Iranian dissident group that his government once labelled a terrorist organization and has been described as a cult.

Harper, who has been a vocal critic of the Iranian regime during and after his time as prime minister, gave a speech at the Free Iran conference on July 13. This year’s gathering was held at the MEK’s newly-built headquarters located in rural Albania.
“I am delighted to be here, because there are a few causes in this world today more important, at this moment, than what you are pursuing: the right of the people of Iran to change their government and their right to do it through freedom and the power of the ballot box,” he said, to applause from the audience. 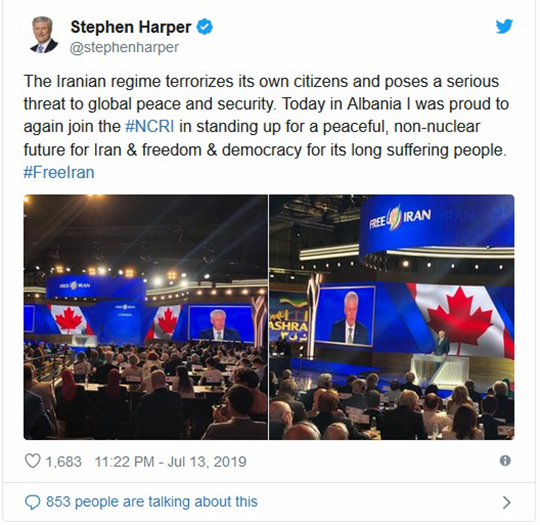 The conference was organized by the Paris-based National Council of Resistance of Iran (NCRI), a group founded by the MEK, which aims to topple the current theocratic regime in power since the Iranian revolution. The council calls itself “an inclusive and pluralistic parliament-in-exile.”
According to the Guardian, the MEK’s new headquarters is located in a rural fenced-off hillside compound outside Albania’s capital of Tirana. It’s where more than 2,000 of its members live.
The well-funded and well-organized MEK, also known as the People’s Mojahedin Organization of Iran, has received the backing of numerous high-profile politicians in the West.
For example, U.S. President Donald Trump’s personal attorney, Rudy Giuliani, spoke at the conference and called for the overthrow of the clerical regime. Former Democratic senator Joe Lieberman and British Tory MP Matthew Offord also participated.
Members of Trump’s inner circle, including his national security adviser John Bolton, have also spoken in favour of the group and its mission.
Harper’s former foreign affairs minister John Baird was also a speaker at the event. Former B.C. Conservative MP Paul Forseth also spoke.
Conservative figures calling for a regime change have increasingly offered support in recent years, but Liberals, such as Irwin Cotler, David Kilgour and Judy Sgro, have also publicly supported MEK.

While the 50-year history of the organization is long and complicated, the MEK has been criticized more recently as a cult.

According to a 2009 RAND Corporation analysis, the MEK turned toward cultlike practices after its leadership relocated to Paris in the mid 1980s. It included engaging in “near-religious devotion” to the married Massoud and Maryam Rajavi.

Its members were said to engage in “public self-deprecation sessions, mandatory divorce, celibacy, enforced separation from family and friends, and gender segregation” — allegations reinforced by independent reporting over the years.

Massoud disappeared during the 2003 U.S. invasion of Iraq, where the MEK was based for years with the support of Saddam Hussein, but Maryam Rajavi has continued to represent the MEK.
Rajavi is now the “president-elect” of the NCRI. According to the council’s website, she will hold the position for “the provisional period for transfer of power to the people.”
In his speech, Harper endorses Rajavi’s 10-point plan for a post-clerical Iran, calling it “the future the world wants.”
The plan includes universal suffrage, political freedom, ending the death penalty, secular governance, equality, an independent judiciary, upholding human rights, installing a capitalist economy, promoting regional peace and establishing a non-nuclear Iran.
Thomas Juneau, a Middle East expert at the University of Ottawa, said while the group bills itself as a “viable democratic opposition to the Islamic Republic,” that’s far from the truth.

“It is a violent, thuggish, corrupt cult,” he said. “It’s also a movement that has absolutely no support inside Iran.”

“For Canadian politicians, serving or retired, to endorse the MEK and by attending the event … that should not be acceptable.” 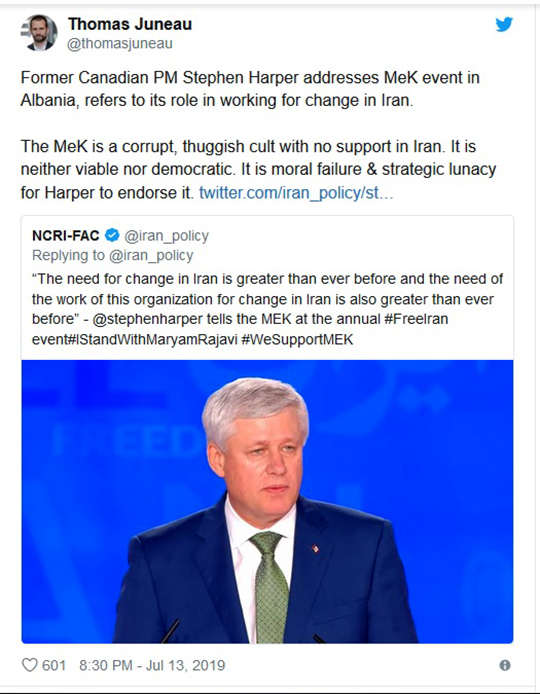 Juneau, who took to Twitter over the weekend to criticize Harper, said supporting an “undemocratic” leader like Rajavi does a “disservice” to the actual cause of democracy in Iran.
Harper was criticized last year for speaking at an MEK-sponsored conference in Paris.
Juneau also noted independent reporting has shown the MEK runs a “slick propaganda machine” and handsomely pays speakers to support their cause.

The Guardian recently spoke to men in Tirana who had fled the MEK compound over the last two years, where they said life inside the camp was of a “cultlike atmosphere” in which mobile phones and contact with relatives, and between men and women, were prohibited.
Members were also required to spend days sitting at computers flooding the internet with messages in support of the MEK. 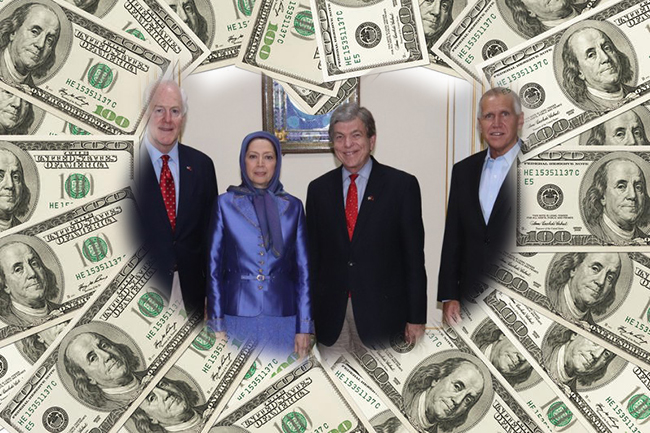 Iran’s Mohajedeen e Khalq: MEK Money Sure Can’t Buy Love But it can buy a lot of politicians

Questions from iPolitics sent to Harper’s office on Monday via his website, including whether he was paid by the MEK to speak at the event, were not met with a response.
Until 2012, the U.S. and Canada designated the MEK as a terrorist entity. The group was once an armed faction, carrying out assassinations of Iran regime figures, but now supports propping up a secular government via non-violent means.
For much of his speech, Harper called for countries to take a harder line on the ayatollah’s regime.
“The right policy, the only realistic policy is to impose sanctions, boycott, designate institutions as terrorist organizations and do what my government did in Canada: close down the regime’s embassies around the world,” he said.
“Weakness and appeasement will not avoid a military confrontation with this regime.”

Juneau said he believes political figures such as Harper know of MEK’s reputation but want to be seen as taking a hard line on the Iran regime through a controversial, but well-organized group.

“It’s opportunism in the most cynical way possible.”
ipolitics.ca 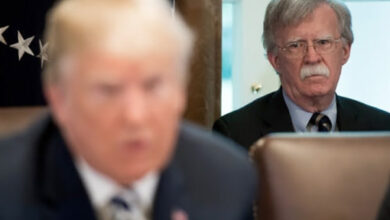