On 26 November, early Wednesday morning at 3:54 local time, northwestern Albania was struck by a strong 6.4-magnitude earthquake with an epicenter northwest of the capital Tirana. The maximum perceived intensity was VIII (severe) on the Modified Mercalli intensity scale. The tremor was felt in all parts of the country, and in places as far away as the Italian city Taranto and the Serbian capital Belgrade, some 370 kilometers northeast of the epicenter. It was the strongest earthquake to hit Albania in forty years. There have been hundreds of aftershocks, of which four have been greater than 5-magnitude.
Following the deadly earthquake, the Albanian government declared Wednesday a day of national mourning and a state of emergency in the Durres and Tirana regions. The earthquake razed several buildings to the ground in the port city of Durres and the surrounding villages, trapping dozens of people. Material damage and casualties have been reported in Tirana also. Neighboring and European Union countries have reacted to the earthquake with sending civil emergency rescue teams and financial aid.
For more than 36 hours, civil emergency crews, police, the army and specialized rescue teams from other countries have been digging in the ruins of collapsed buildings seeking survivors. The authorities say they have so far rescued 45 people. According to the latest official data, at least 48 people were killed in the earthquake, with 790 injured and more than 20 missing. These numbers are far from complete, especially considering the official hiding of foreign victims.

Unreported foreign casualties
While Albanian citizens living in Tirana and Durres, 30 km and 15 km from the epicenter respectively, had some luck to avoid disaster, the members of the People’s Mojahedin Organization of Iran (PMOI or MEK) aka National Council of Resistance of Iran (NCR) had none. Stationed only 5 km from the epicenter of the main earthquake, as well as less than a kilometer away from the epicenter of powerful 5.3-magnitude aftershock, the residents of poorly built barracks of the Ashraf-3 base have experienced true horror. 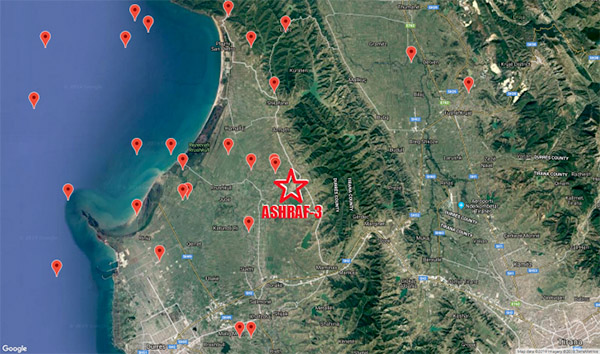 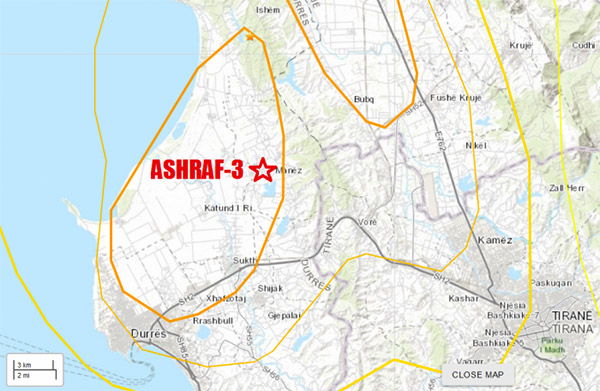 And everything almost went unreported. Standing with a colleague at the entrance of Tirana’s hospital in search of new information and tragic personal experiences, we were surprised to see a column of emergency vehicles led by a police car, trumpeting and shouting “Clear the way!” Wondering who is so important that ordinary civilians have to get out of the way, including wounded women and crying children, we followed the column until it stopped and politely asked the police officer about the VIP patients. “No camera, get back,” he ignored our questions and tried to drive us away.
Standing aside, but at a decent distance, we saw paramedics fastly carrying wounded on stretchers inside, at least two dozen of them. Some were covered with sheets full of blood, probably half dead, while others were howling in some incomprehensible language. Foreigners, therefore special treatment, I think to myself. But who? Too many for some embassy staff, too much well-treated for tourists, I wondered.
Given the obvious secrecy and strict police measures, we decided to change our approach. Instead of asking sensitive details with the press cards, we dodged the cops and approached one young paramedic: “They sent us here, we are translators, where should we go?” I asked him with self-confidence. “So you speak Iranian,” he responded. “Of course I speak Persian, or Iranian, as you inaccurately say,” I taught him differences and repeated the question about direction. “Second floor,” he explained, showing us where to go, and left quickly.
For me, things immediately started to make sense. Few in Albania do not know that there is a base near Tirana with 4,000 members of the controversial Iranian opposition group, displaced in 2016 from Iraq at the request of the US government. We journalists know a little more. Their compound is highly guarded and residents are strictly controlled, with no contact with the outside world. Several fugitives from the base gave shocking stories, and Albanian journalists who reported about their cases were facing tremendous pressures and harassment. Thus, this disastrous situation turned out to be a gold mine, a unique opportunity to find out what happened there. And what was happening earlier.

Repeating the same approach, I introduced myself as a translator and entered the hospital building. Fortunately, being busy in all that mess, none of the hospital staff asked additional questions or demanded documents, nor know Persian. Neither do I. Therefore, I hoped to find a sufficiently lively and friendly English speaker among the casualties, and I did. Teymur, a skinny mustachioed man in his late 50s, spoke English badly and slowly, but honestly.

“Not fair, we’re razed, but Tehran is not”

“It started shaking while I was sleeping in our dormitory with many others,” Teymur begins his experience. “At first the bed started to shake and I saw many waking up, then the windows and ceiling bursting down. Comrades in our and adjacent dormitories started screaming, some shouting that we were under attack. Finally, the structure began to collapse and the beam fell on my legs. I can’t feel my legs. In the half-dark I saw large chunks falling down, some were crushed, instantly dead. All this happened in less than a minute. Soon there was a lot of dust and I couldn’t see anymore, I just yelled for help. It felt like Mersad.”

Later, on the Internet I found out that Mersad was the name of the 1988 military operation in which Iranian army destroyed their troops in a canyon. Asked to evaluate the number of dead and the damage in their base, Teymur says:

“At dawn I was pulled out of the rubble. They lined us up the road and we waited for emergency vehicles. I heard that some were taken to Durres, others to Tirana. I saw seriously wounded and dead, perhaps dozens. I don’t know exactly. Earlier in the ruins I was calling out the names and out of twenty comrades in dormitory, only three answered me. But I know very well that the dormitory barracks have been destroyed, some razed to the ground, some badly damaged. Most of the base staff were sleeping, the rest were at computers in a hall, working an eight-hour night shift online. There are casualties there too, the ceiling has fallen and ruined our hard work. Simply not fair!”

It was astonishing that Teymur spoke calmly about the dead and wounded, but started to blubber like a baby about the computer hall. He seemed to be more upset by infrastructure losses than by human casualties. I asked him why the computer hall is so important to him.

“We arrived in Albania three years ago and since then we have been preparing for a new life. We have been told that our dear Saudi and Israeli allies have invested a lot of money in our base and infrastructure, that we are safe here. We have been told that we have full support of the US government and all their allies, mister Bolton even promised us to celebrate together in Tehran soon. A year ago, we got new computer equipment and for months we worked hard, promoting human rights and democracy. Just ten days ago, we saw Iranian people on the streets and Tehran buildings ablaze, we thought our dreams had come true. But today, no revolution, no halls, no computers. Everything was lost!”

“It has something to do with Iran”

Teymur’s raised voice elicited the reaction of his colleague in the next bed, chanting something like “mark bar this, mark bar that.” Asked to translate from Persian, Teymur explained that his comrade was cursing Iran and its government. “Why,” I asked.

“It has something to do with Iran, no doubt, we all know that,” Teymur claimed. I was pretty dazzled and asked him if he wants to say that Iran caused the earthquake.

“Yes, yes! How is it possible that an earthquake hits us directly? We were told that the earthquake epicenter was very, very close to our base, that there had been no such strong earthquake for decades! Is it a coincidence that it strikes precisely in the early morning hours when all comrades are at the base, inside the barracks? Someone obviously planned to cause as many casualties as possible! How is it possible that an earthquake strikes us just five days after the suppression of our revolution inside Iran? This is pure revenge! I’m sure that Iranian fingerprints exist. In fact, the Albanian police already announced that they had uncovered Iranian agents who were planning attacks against us, just a month ago. Maybe their agents buried and activated powerful bombs, maybe they use high frequencies via satellites to provoke earthquakes, I read that it’s possible. Iran should not posses such advanced technology, I hope our brother Trump will increase sanctions against their research networks, or respond by force,” Teymur said.

Just when his story was becoming more and more interesting, our conversation was interrupted by a security guard who banged on the door. “Who gave you permission to interview the casualties? If you don’t have an interview permit, get out”, security guard yelled, threatening to take our equipment. “If you publish anything in the media without permission, we will sue you and you will regret it,” a corpulent patron of alleged democracy fighters threatened us at the end.