Tehran’s ambassador to the UK says the notorious Mujahedin-e-Khalq Organization (MKO) terror group and other foreign-based anti-Iran movements have launched a propaganda campaign over a coronavirus outbreak in the country with the goal of misleading the Iranian public opinion.

Hamid Baeidinejad said the MKO terrorist cult and its fellow movements have been trying to exploit the epidemic to force the public opinion in Iran into a “mental deadlock.”

The campaign features a “very duplicitous” media and news policy, the envoy said.

In the early stages of the virus’ emergence in Iran, when the country had not yet sensed the urgency to seek foreign aid, the media campaign tried to imply that the Tehran government would resist Western assistance even at the expense of its people’s lives, he said. 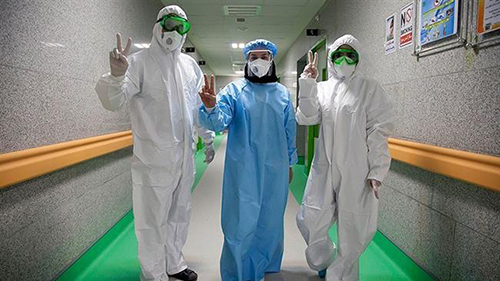 At the time, they were trying to create the impression that Iran was facing international isolation, and that no country was willing to provide it with emergency aid, Baeidinejad noted.

In the second phase, the propaganda drive alleged that the foreign medical supplies that had entered the country, including testing kits, were contaminated, he said.

The official gave assurances that Iran procures the foreign items required through trusted suppliers, and that all the relevant sanitary standards are observed in the process.

The Iranian administration outlines the country’s most recent efforts to battle the new coronavirus outbreak.

“The main goal pursued by this propaganda is to create distrust between the people and the authorities,” he noted, dismissing the “delusions” of those who think such campaigns would yield result.

The MKO has conducted many assassinations and bombings against Iranian officials and civilians since the 1979 victory of Iran’s Islamic Revolution. It notoriously sided with former Iraqi dictator Saddam Hussein during his 1980-88 war on Iran.

Out of the nearly 17,000 Iranians killed in terrorist assaults since the Revolution, about 12,000 died in MKO’s acts of terror.

The terrorist outfit was on the US list of terrorist organizations until 2012. Major European countries, including France, have also removed it from their blacklists.

The new virus emerged in the central Chinese city of Wuhan late last year, and has claimed more than 3,000 lives worldwide so far.

In Iran, it first showed up in the north-central city of Qom. By Tuesday, the country reported 77 fatalities, and 2,336 cases of infection. 435 patients have recovered their health.

The country has mobilized all its resources to tackle the issue, including by ramping up the production of sanitary items, increasing imports of preventive items and enforcing diagnostic measures across the nation.

Most recently, Minister of Industry, Mine, and Trade Reza Rahmani said the production of disinfectants and hygiene products had at least doubled over the past two weeks.