The anti-science, conspiracy-driven, and radical right-wing agenda of the Trump administration has directly led to the needless deaths of tens of thousands of Americans and foreign citizens amid the worst pandemic to strike the world since the 1918 influenza scourge. Like any fascist tyrant, Trump requires scapegoats to maintain his power base and he has discovered plenty of them.

In addition to scapegoating almost a dozen U.S. state governors, two past U.S. presidents, and the Democratic Party, Trump has seen fit to blame the World Health Organization for the Covid-19 pandemic, even threatening to cut off U.S. assistance to the global health body.

Trump’s attack on the WHO came as no real surprise. The director-general of the WHO, Dr. Tedros Adhanom Ghebreyesus, is from Ethiopia, a nation Trump included in his sweeping reference to African nations as “shithole countries.” Trump also falsely accused the WHO of being “China-centric.” Dr. Tedros hit back at Trump’s criticisms, stressing that countries should avoid politicizing Covid-19 “if you don’t want to have many more body bags.”

Trump’s familiar fascist tactic of scapegoating others for his own failures is what was ultimately behind his attacks on the WHO and China. However, Trump’s xenophobia and racism were not the only reasons for his attacks. Trump was echoing the propaganda of several right-wing entities, including those that back Taiwan’s admission to the WHO against strong Chinese opposition, the Falun Gong and its press mouthpiece, “Epoch Times,” that are opposed to the Chinese government and receive favorable treatment by the Trump White House; and white supremacist groups opposed to the WHO director being a black man from Ethiopia. Also irritating Trump was Dr. Tedros’s admonitions to Washington that it was not helpful to refer to Covid-19 as the “Chinese virus” or “Wuhan virus.” Anti-Asian racial attacks were reported from around the world after Trump and his supporters began blaming the virus on China.

Rather than continue to maintain the U.S. government’s pandemic and epidemic watch and reaction infrastructure, one that coordinated much of its activities with the WHO and similar national entities around the globe, the Trump administration brutishly slashed and burned the capabilities of the government to monitor the outbreak of human, animal, and plant diseases. These

In 2019, Trump ignored the findings of the first annual report by the Global Preparedness Monitoring Board, an entity established by the WHO and World Bank, which predicted a global pandemic that could kill tens of millions of people. The previous year, the Trump White House abolished the National Security Council’s directorate of Global Health Security and Biothreats. The directorate’s “Playbook for Early Response to High-Consequence Emerging Infectious Disease Threats and Biological Incidents” was tossed aside and ignored. Department of Homeland Security staff elements charged with ensuring the national defense against a pandemic were fired or re-assigned. A U.S. Center for Disease Control and Prevention doctor assigned to the U.S. embassy in Beijing and was responsible for coordinating U.S. efforts with her Chinese counterparts was called back to the United States with the position remaining unfilled. Trump also ended the State Department’s PREDICT program that funded joint U.S.-Chinese pandemic research and warning programs, as well as similar operations coordinated with some 60 other foreign laboratories.

A November 2019 report from the National Center for Medical Intelligence (NCMI), a part of the Defense Intelligence Agency (DIA), issued a few weeks prior to the first Covid-19 outbreak in Wuhan, China, provided an early warning of the impact of Covid-19 in China. The NCMI has access to National Security Agency intercepts of Chinese cell phone calls, emails, and encrypted communications among senior officials of the Chinese government. In a still- classified report, the NCMI warned that the virus outbreak in Wuhan stood to be a cataclysmic event that posed a threat to U.S. forces in the Asia-Pacific region. Covid-19’s effect on U.S. naval forces, including the USS Theodore Roosevelt and USS Ronald Reagan, aircraft carriers assigned to the U.S. Seventh Fleet, proved the accuracy of the NCMI’s November report.

Trump simply ignored reports from the NCMI, the WHO, and his own White House trade official, Peter Navarro. By the end of January, while Trump still considered the threat of Covid-19 to be a “hoax” ginned up by his Democratic opponents, Trump had been amply warned via classified President’s Daily Briefs and Navarro’s memoranda to the National Security Council that the world was on the precipice of a pandemic catastrophe. Trump continued to ignore the situation, even claiming the virus would disappear when the weather became warmer in the Spring. On February 23, Navarro sent the following memo to Trump via the National Security Adviser, acting Chief of Staff Mick Mulvaney, and the Covid-19 Task Force chaired by Vice President Mike Pence:

THROUGH NSA, COS, COVID-19 TASK FORCE

There is an increasing probability of a full-blown COVID-19 pandemic that could infect as many as 100 million Americans, with a loss of life of as many as 1-2 million souls.

Certain far-right elements in the Trump administration, particularly Secretary of State Mike Pompeo, began figuring out ways to weaponize Covid-19 to bring about “regime change.” Sanctions were increased against Iran, Venezuela, and Cuba. Pompeo and his cohorts, including Treasury Secretary Steve Mnuchin, took full advantage of the terrible impact of Covid-19 on Iran to deny medical and financial support to the Iranian government and people. The influence of the cultish terrorist organization, Mojahedin-e-Khalq (MEK), which used the pandemic to increase pressure on Tehran, is strong within the Trump White House. In addition, the right-wing Florida Republican senators Marco Rubio and Rick Scott, used the pandemic to coordinate with wealthy Cuban and Venezuelan expatriates in south Florida to increase political pressure on Cuba and Venezuela.

Trump’s Attorney General and capo, William Barr, used the opportunity of the pandemic to indict President Nicolas Maduro and senior officials of his government on phony drug smuggling charges, the same gambit that was used by Barr against Panamanian leader Manuel Noriega when George H. W. Bush wanted him out of the way.

Rejecting the porcine snorts from Pompeo, Andorran Foreign Minister Maria Ubach declared, “I am aware of the position of the United States, but we are a sovereign country and we can choose the partners with which we are going to have cooperation.” Pompeo and his team of dime store cowboys were further incensed after the United Kingdom formally thanked Cuba for allowing the cruise ship “Braemar” to dock in Cuba to repatriate British passengers back home. The Cuban gesture came after other Caribbean nations refused to allow the ship to dock and offload passengers after an outbreak of Covid-like symptoms on board.

After the scourge of Covid-19 passes and the world is largely finished with disposing of its dead, there will come a time for calling those to account who ignored and took advantage of the pandemic for their own selfish interests. Mr. Trump will most deservedly be at the head of the line when it comes to pointing accusatory fingers.

Consequences of attacks in Tehran will be felt around the world

UNHCR: Camp Ashraf residents have to renounce violence before applying for refugee status 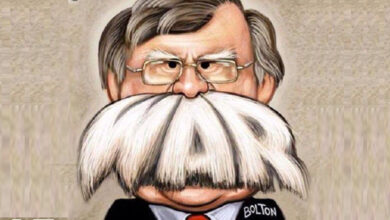 MEK Advocate responsible for billions in US opportunity costs