Following the nationwide petition of the families with nearly 11500 signatures, a number of families of the members trapped in the Mojahedin-e Khalq Organization (MEK) camp in Albania from Mazandaran province (north of Iran), have sent separate messages and letters to the Albanian prime minister, urging him to enable them to visit or at least have video or audio contact with their loved ones.

The families also expressed concern about the health of their loved ones in the context of the outbreak of coronavirus disease.

Families are waiting for the Albanian government, as a humanitarian gesture, to respond appropriately to these demands and solve the problems ahead. Many of these families have not heard from their loved ones for decades now.

It should be noted that during these years, many families in Mazandaran province died while waiting to see their loved ones, and they never managed to find out about them, whose names are now missing in the attached list.
Other Mazandarani families also keep sending letters and messages to the Albanian Prime Minister. 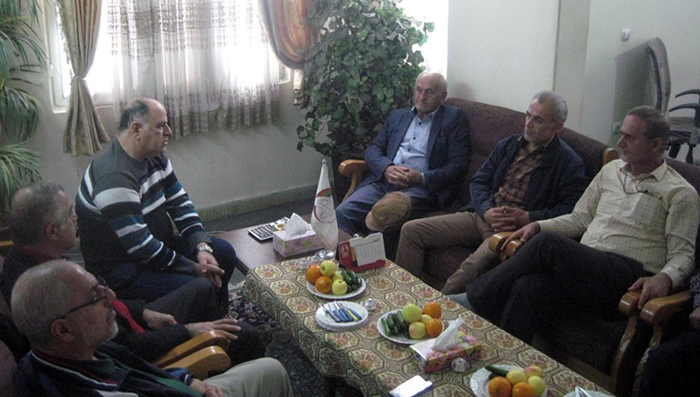 Here are some examples of Mazandaran’s elderly mothers and fathers’ messages to the Albanian Prime Minister, whom Rajavi calls agents and terrorists:

Khadijeh Rezvan Yar Sarai, the mother of Mohammad Reza Khazaei, wrote to Albanian Prime Minister Edi Rama: “As a mother, why shouldn’t I even have a phone call with my son?”

Ali Asghar Ahangar, son, and Nasibeh Ahangar, daughter of Abdol Hossein Ahangar, wrote: “The MEK has deprived us of a father. Why shouldn’t we be able to talk to our father and hear his voice after so many years?”

Fatemeh Ashouri, Maryam Ramezani’s mother, wrote: “I miss my daughter very much. Why shouldn’t I hear her voice after years?”

Houshang Babaei Chamazekti’s father wrote: “I miss my son very much. Is it true that after so many years I cannot meet my son who is in your country, or at least hear his voice?”

Mohammad Reza Tavakoli the father and Zahra Rajabpour the mother of Alireza Tavakoli wrote: “We have not seen our son for more than 30 years. We miss him very much now and we suffer daily. As parents, why should we not meet or at least talk to our son?”

Safar Zare, the father of Ramazan Zare, wrote: “As a father, why shouldn’t I have the right to meet with my son or at least see his picture and hear his voice?”

Mohammad Oladi, the father of Abbas (Javad) Oladi, wrote: “I miss my son very much. The lack of communication and the inability to meet is very sad.”

Roghayeh Babaei, the mother of Majid Mohammadi Golafshan, wrote: “I have not heard from my son, who is at the camps of the MEK for more than 30 years. Make me happy by removing the obstacles on his way to meet or call me.”

Mrs. Ganjian, the mother of Mostafa and Mahnaz Ganjian, wrote: “As a mother, I miss my children very much. But unfortunately, your government is obstructing the issuance of visas to visit them.”

Farideh Abui, the mother of Mohammad Jafari Keshtali, wrote: “His father died while parting with our son, and I will always remember him. I request that an arrangement be made so that I can have a meeting with my son in Albania before I die.”

Kaveh Latifi, son of Mahmoud Latifi, wrote: “I have not heard from my father for more than 30 years. I am very eager to hear his voice at least once.”

Abbas Famil Zakeri, the father of Mohammad Hossein Famil Zakeri wrote: “I request you to make me happy by removing visa barriers to meet with my son.”

Ghanbar Ali Shabanpour, father of Hassan Shabanpour, wrote: “I miss my son very much. Why don’t you allow me, an old father, to visit my son once before I die?”

“I have raised my children with great difficulty over the years. Why can’t my husband at least talk to his children?” Wrote Mahrokh Rabbani Div Sheli, the wife of Massoud Tusi Bakhsh.

Hassan Tusi Bakhsh and Milad Tusi Bakhsh, sons of Massoud Tusi Bakhsh, wrote: “We are very sad that we cannot hear our father’s voice. Rajavi deprived us of having a father and did not even allow us to hear his voice once.”

Abazar Zabihi, the son of Fatemeh Fekrian, wrote: “Why shouldn’t I have the right to hear my mother’s voice after 30 years and communicate with her?”

“Is it a crime to want to hear my daughter’s voice after 30 years?” Wrote Roghayeh Kiani, Mehri Qadirzadeh’s mother.

Shahnaz Bagheri, the wife of Ahmad Rezaei, wrote: “After my husband was captured, I raised my children with great difficulty. Now why don’t they at least allow him to visit his children?”

Khairullah Sabet Rostami, father of Mohammad Mehdi Sabet Rostami, wrote: “I miss my son very much. Doesn’t this make you wonder why the MEK prevents a son from having at least one contact with his father?”