From Khorasan Razavi province (northeast of Iran), a number of families of members trapped in the Mojahedin-e Khalq (MEK) camp in Albania, sent separate messages and letters to the Albanian Prime Minister Edi Rama simultaneous with the petition of over 11,000 signatures, urging him to lift the obstacles in order to let them meet their loved ones, or at least arrange a phone call with them.

Many of these families have not heard from their relatives in Albania for several decades now.

The letters were accompanied by photos and documents and were sent to other Albanian officials, as well as European and international authorities and various media outlets. Families are also concerned about the health of their relatives in the context of the outbreak of the COVID-19 pandemic.

Families are eagerly waiting for the Albanian government to respond to these requests and take effective action as a humanitarian gesture. Many of these families have not heard from their relatives in Albania for several decades now.

It should be noted that during these years, many family members in Khorasan Razavi province, while waiting to meet their loved ones, passed away and never managed to find out about their situation, and now their names are missing from the appendix list.

Other families from Khorasan Razavi province are still sending letters and messages. 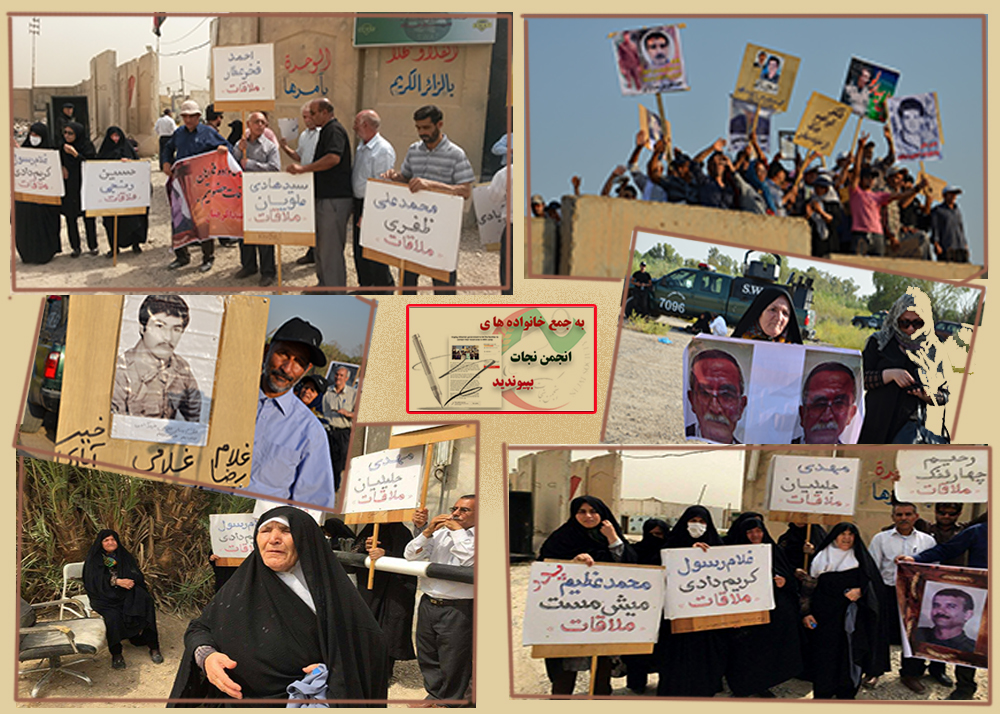 The table of the letters and messages sent so far from Khorasan Razavi province is attached.

Below are some messages to the Albanian Prime Minister for emphasis. Rajavi brazenly calls elderly mothers and fathers as well as the offspring of members of his cult terrorists and mercenaries:

Mohammad Jafar Azad Manjiri, the father of Maryam Azad Manjiri, wrote in a letter to Albanian Prime Minister Edi Rama: “I have been waiting for my daughter for more than 30 years. We families are happy that our loved ones have come to your country, but unfortunately I was told that your government does not issue visas to families. I ask you to give us visas so that we can see our children.”

“I have not seen my daughter for more than 30 years. I want at least one phone call with her“, wrote Batool Qazi, Maryam Azad Manjiri’s mother.

Mehri Khairkhah, the mother of Massoud Abuzarian, wrote: “It is a pity that I cannot come to your country to see my son.”

Khadijeh Jahedi, the mother of Mohammad Baghaei, wrote: “His father died during our son’s separation from us and I keep crying, but I do have hope. Make me happy by giving me a visa to see my son.”

Narges Houripour, the wife of Mehdi Behbahani, wrote: “I have been waiting for my husband for more than 35 years and I raised my children with difficulty. Isn’t it time to have a family visit?”

Rabia Behbahani, the daughter of Mehdi Behbahani, wrote: “We were little sisters when our father was captured in the war in defense of our homeland and then deceived by Rajavi. Now he is in your country and trapped by the MEK. We urge you to let us meet him.”

Raheleh Behbahani, another daughter of Mehdi Behbahani, wrote: “Make it possible to communicate with our father.”

Reyhaneh Behbahani, the other daughter of Mehdi Behbahani, wrote: “We want to contact our father.”

“I have been waiting for my son for more than 35 years. Who is responsible for that? Why shouldn’t they be allowed to call their families?” Wrote Effat Akhlaqi, Mohammad Ali Tavakoli’s mother.

“As a mother, I don’t understand why the MEK does not allow my daughter to make even one call,” wrote Moluk Tavkkol Afshar, the mother of Marzieh Hosseini Mahmoudabadi.

Fatemeh Salehi Shirazi, the mother of Hossein Khorsandi Akbarzadeh, wrote: “Although my son has a wife and a child and they need him, Rajavi has caught him and he is now being held captive at the MEK camp in your country, which is a free country.”

Zahra Shakibaei, the wife of Ebrahim Doust Razmgah, wrote: “He has left me in Iran with my children in Mashhad for more than 35 years and has been deceived by Rajavi’s lies. He went to the invading country of Iraq and is now in your country at the MEK camp. Contrary to the first agreement, which was supposed to be a temporary settlement in your country, they were moved to an isolated place, like in Iraq under Saddam Hussein.”

“We have been waiting for our father for more than 35 years to see him. We ask you to ask Rajavi why he does not allow our father to visit us,” said Maryam Doust Razmgah, Ebrahim Doust Razmgah’s daughter.

“After more than 35 years, we want to meet our father,” wrote Maliha Doust Razmgah, another daughter of Ebrahim.

“We have been deprived of paternal love for more than 35 years. Allow us to communicate,” wrote Massoud Doust Razmagah, son of Ebrahim Doust Razmgah.

Leila Begum Robat Jazi, the mother of Seyed Javad Robat Jazi, wrote: “I am unhappy that my son has been deceived by a cult that has conspired, murdered and looted alongside Saddam Hussein.”

Seyed Ali Robat Jazi, the father of Seyed Javad Robat Jazati, wrote: “I want to meet my son after years of estrangement.”

“Can you imagine a mother enduring the separation of her son for more than 35 years? What kind of organization does not allow a mother to visit her son?” Wrote Sakineh Moghimi, the mother of Hojjatullah Rezaei Targhi.

“I had raised my children with great difficulty. It is not fair for me not to be able to come to your country to visit my daughter. Your country has people with culture and kindness,” wrote Hossein Ranji’s mother, Azra Javaheri.

Mohammad Qassem Zafarani, Hassan Zafarani’s father, wrote: “Thank you for accepting my son as a temporary guest, but I don’t know why you don’t give us visas to come to your country to see him.”

Morteza Shamhamdi’s mother, Shaukat Valizadeh, wrote: “I am a mother and I ask you to allow me to meet with my son.”

Manouchehr Shahabi’s father, Hesamuddin Shahabi, wrote: “I have not heard from my son for more than 30 years. I ask you to allow me to meet with my son.”

Mandana Musazadeh, Mahboubeh Safavi Baigi’s daughter, wrote: “Although I managed to meet with my parents twice after 30 years, it became possible through Sweden, which itself was associated with the hardships and sabotage of the MKO. They prevented me from traveling with my brother and sister who live in Sweden. Now I ask you to allow me to travel from my homeland of Iran to see my parents.”

Mehran Karim Dadi, the son of Gholam Rasool Karim Dadi, said: “I myself was a victim of the Rajavi cult. When Saddam Hussein fell, I was able to escape at night and return to my homeland, Iran. For years, my parents and my two sisters were held in Iraq by the Rajavi cult. Rajavi is terrified of even family contact with his members. Rajavi is still very happy that you don’t give us a visa.”

Mehran Karim Dadi, the son of Suri Nourani, also wrote: “I want to communicate with my parents.”

“We went to Iraq many times to see my son, but unfortunately Rajavi’s agents not only did not allow us to visit him but they also threw stones at us. We were happy that our son went to a European and free country,” wrote Ramazan Ali Kalateh Safari, Ali Asghar Kalateh Safari’s father.

“We can see our son in Albania now, but unfortunately your government does not give us visas. Please make us happy by giving us visas.”

Fatemeh Firoozi, the mother of Zahra (Sara) Garabian, wrote: “I haven’t heard from my daughter, who is with the MEK, for years. I ask you for help.”

Goli Gorji, Ismail Gorji’s mother, wrote: “I have been waiting for my son for more than 30 years. I am worried about my son.”

Hussein Lesani, Ali Asghar Lesani’s father, wrote: “I have not heard from my son for more than 30 years. Now I have learned that he is in your country. Please allow me and my family to travel to your country with a visa.”

Farideh Javaheri, the mother of Nafis Zaffar Moghadam, wrote: “I have been waiting for my son for more than 30 years. His father died in his absence. Rajavi did not allow him to offer his condolences after his father’s death. I ask you to give us a visa.”

Mandana Mosizadeh Aghovi, daughter of Mehdi Mosizadeh Aghovi wrote: “I have been separated from my father for many years because they do not allow me to communicate with him. Please do something so that I can meet him.”

Mohammad Taghi Mirzaeian, the father of Shahriar Mirzaeian, wrote: “I have been waiting for my son for more than 30 years. Unfortunately, your government does not issue visas to us families. I ask you to give us visas.”

“My daughter has been separated from me for many years. I have not received a single call. Let me see her,” said Shahrbanoo Khedmangozar, Tayyeba Yadegarian’s mother.

Mohammad Ali Yaghmaei, the father of Shaukat Yaghmaei, wrote: “I have been waiting for my daughter for more than 30 years. Unfortunately, your government does not issue visas to our families. I ask you to give us visas to visit our loved ones.”