“A Star of Ashraf Galaxy” was the title of honor that Amir received after he was killed. Amir Shams Haeri was 34 years old when he was killed together with 51 other members of the Mujahedin Khalq in the attack by “Iraqi Intifada Youth” to Camp Ashraf, Iraq.

His father Hadi Shams Haeri was a longstanding member of the MEK before his defection. He joined the group in 1975. Amir was born in 1979. Following the MEK clashes with the newly established Iranian government after the Iranian revolution, Hadi fled to Iraq to join the MEK alongside his wife (Mahin Nazari) and their two children Amir and Nosrat. 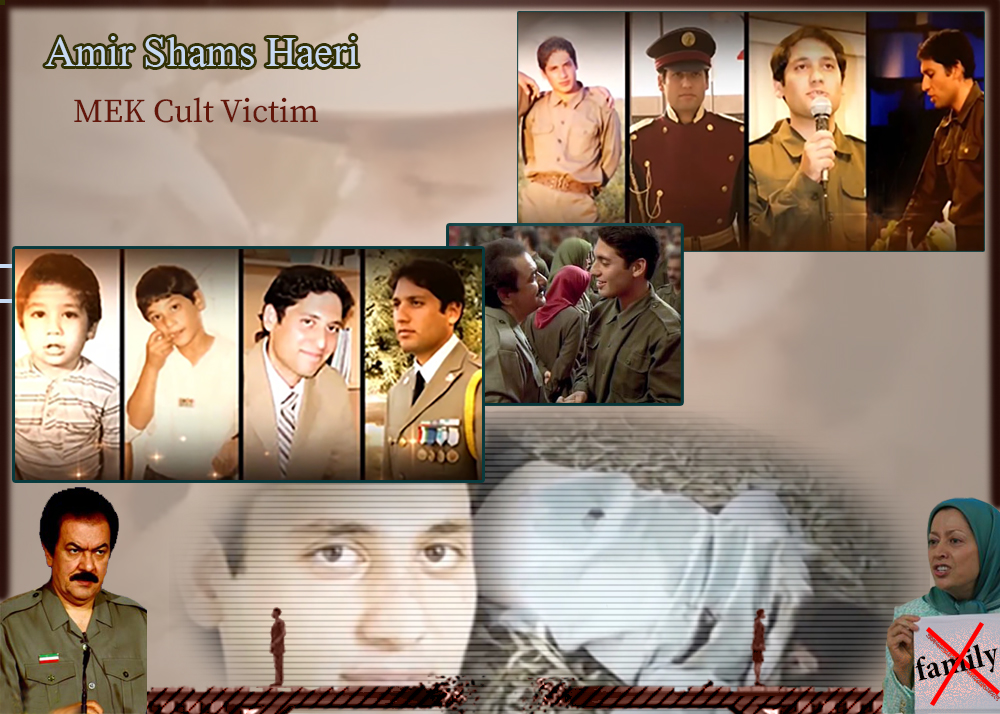 Hadi defected the group in 1991 but the MEK leaders took Amir and his sister as hostages and never let them out.

Mehdi Khoshhal an MEK defector and a friend of Hadi writes about his endeavors to take his children back from the group.

“In 1993 Hadi finally reached Netherlands where he could find a stable situation. There, he got to know that the MEK had brought Amir and Nosrat to Germany,” Mehdi Khoshhal writes about Hadi. “He went from Netherlands to Germany to look for his kids at mojahedin’s school. But, the MEK sent their mother Mahin Nazari from Iraq to Germany in order to take the kids to Iraq in revenge for Hadi’s demand to take them.”

In October 2010, Hadi was sick and tired of years of endless efforts to take his children out of the Cult of Rajavi. He wrote an open letter to Amir and Nosrat opening up his grieves in these 20 years of separation. He spoke of a large number of letters that he had sent via the International Red Cross to his kids and were never received by them. In the letter, he advised his children to make a correct decision for their future life telling Amir:

“Son! you are reaching the second half of your life. You should make a conclusive decision and as the older brother you should help your sister Nosrat and save her [from the MEK]. Even you may be able to help your mother find herself and get back to a normal life and contact her family. Dear Amir, I am close to death. I may have no more chance to see you. If you are late, I will not be able to meet you. I am afraid I cannot see you before my death. My beloveds, my message is not political at all. It’s up to you how to think. My message is the message of a suffering heartbroken father whose only wish is to see you, you prosperity and happiness.”

The father died longing to see his children but he did not know that Amir also would die only two years after his father died. GhorbanAli Hosseinnejad former member of the group was Amir’s Arabic teacher at Camp Ashraf.

“After the defection of his father, Amir’s last name was changed into his mother’s. He was called Amir Nazari by the group leaders, “Hosseinnejad writes. “I had no clue that he would lose his life under wrong politics and violent ambitions of Rajavi. “