An Albanian journalist, committed to exposing the criminal activities of the anti-Iran Mujahedin-e-Khalq Organization (MKO) terror group, responds to the threats he has received from the group’s ringleader, Mariam Rajavi.

“I really want to have an open debate with you,” Olsi Jazexhi told Rajavi in a video posted on YouTube on Monday.

He said he had made the video after the MKO ringleader finally dared to verbalize threats against him and Gjergji Thanasi, a similarly outspoken Albanian journalist, through two of the group’s “commanders.” The terrorist top brass conveyed the threats in two articles that have appeared on MKO-related websites.

Jezexhi expressed surprise that the ringleader had chosen to target him in this fashion this time around after three years of “attacking me from behind” by pressuring him through the Albanian government and his employer.

“I’m very happy that you have come out with the face of your commanders to attack me,” he said, adding that the covert attacks had “caused so many troubles for my life, and destroyed it economically.”

‘Never to be silenced’

The journalist, however, pledged that he would not stop probing the group and revealing information about it.

“I want to tell you, Mariam Rajavi, that Albania is a democratic state, and we are a liberal democracy, where we have freedom of speech,” he said.

“We’re never going to be silenced. We’re going to investigate and expose to the international and Albanian community, the crimes and the illegal things that you’re doing in my country,” Jezexhi said.

The MKO has a squalid history of assassinations and bombings against the Iranian government and nation. It notoriously sided with Saddam Hussein during the former Iraqi dictator’s 1980-88 war on Iran.

Out of the nearly 17,000 Iranians killed in terrorist assaults since the victory of Iran’s Islamic Revolution, about 12,000 have fallen victim to the MKO’s acts of terror.

Western countries, topped by the United States, have, nevertheless, taken the group out of their terror blacklists.

The MKO was relocated from Iraq, where it used to enjoy the US’s protection, to Albania in 2016, where it was allowed by Tirana to set up a paramilitary camp.

Jezexhi said since then, the cult’s membership has grown from some 3,000 to around 7,000, identifying himself as one of the first public speakers in Albania to ever ask his government not to bring in the terrorists.

Jezexhi said the group has attained the “good and useful terrorist” status because of the support it gets from the US, the NATO military alliance and Israel, as well as the money it receives from Saudi Arabia and the United Arab Emirates.

This, he added, was because “they’re being kept as a standing army, ready to be used and deployed at any moment…whenever the United States and Israel wants them to.”

“NATO needs to use [them] in the future war that the Americans and Israel plan to wage against Iran,” the journalist said.

In Albania, the MKO now outnumber even the army and the police, the number of whose overall forces stands at some 6,000.

The MKO terrorists have told the people in Albania that they have come there “on humanitarian visas” while their status does not differ at all from those returning from fighting alongside Takfiri terrorist groups such as Daesh, al-Nusra Front, or Tahrir al-Sham against the Syrian government and people.

Jezexhi said Balkan countries like Albania are mandated to prosecute those who used to engage in fighting abroad after their return, and have jailed and charged hundreds of the Takfiri returnees as a result of the imperative. 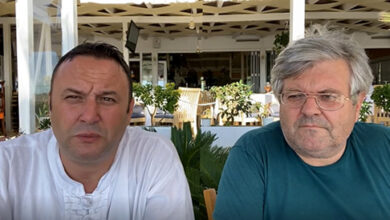