– Leila Giukan: “My father and I have never heard each other’s voice”
Rahim Giukan was born in March 1945. In 1981, while a supporter of the Mojahedin-e Khalq (MEK), he fled and in 1982, he left the country and went to Pakistan and then Iraq and joined the organization. At that time he had a wife and four children. His wife, Ms. Behjat Sediqi, raised their children Mozhgan, Mehran 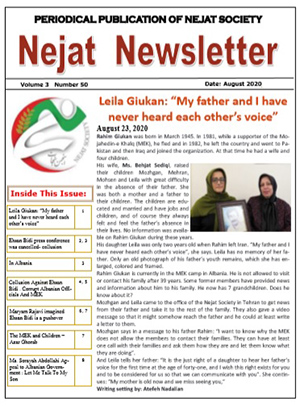 An Iranian citizen and exmember of MEK has been accused of being a foreign agent and is at risk of being expelled from the country. Ehsan Bidi came to Albania with more than 2000 Mujahadeen from the Freedom Camp in Iraq. He was granted refugee status, supposedly lasting until 2023. During his time in Albania, he defected from the MEK and had his refugee status revoked.

– In Albania
Over the last week MEK brought a lot of the members to their TV to swear at their families. One of these families is an elderly mother who has 3 children in MEK. She wrote answering the TV onslaught, asking her sons, “What did I say to make you all swear at me? I only asked you to talk to me. Do you expect me to abandon my children and accept they are willingly swearing at their mother for no apparent reason. If this was in the western media, wouldn’t you accuse MEK of ‘forced confessions’? Apparently, it’s OK if your puppets in Albania do it.”

– Collusion Against Ehsan Bidi . Corrupt Albanian Officials And MEK
Collaboration between Corrupt elements in Albania’s government and the Rajavi Cult against former members and Ehsan Bidi
Iranian asylum seeker Ehsan Bidi has been in the custody of corrupt Albanian security officials since August of last year, without charge, without trial, without the right to visit, and in a completely illegal manner.

– The MEK and Children – Azar Ghorab
She was twenty years old when she died from brain tumor in a hospital in Cologne, Germany. She was left alone and desperate in the last days of her life. Azar’s death caused tumult against the Mujahedin Khalq Organization (the MKO/ MEK/ PMOI/ NCRI/ Cult of Rajavi). A defector, Mehdi Khoshhal began to write a book about child victims of the MEK following the heartbreaking death of Azar.

– Maryam Rajavi imagined Ehsan Bidi is a pushover
The complicity of corrupt elements of the security services, the Albanian government and the Rajavi terrorist cult with the intervention of the US embassy is not hidden from anyone. Iranian diplomats and journalists have been expelled from Albania for alleged security reasons, based on information given solely by the MEK. And this has become the sole propaganda platform of the Rajavi cult, for which Trump has expressed his satisfaction with the Albanian government.

– Ms. Sorayah Abdollahi Appeal to Albanian Government : Let Me Talk To My Son
Emir Aslan Hasanzadeh is an Iranian mojahedeen taken by MEK in 2002 (1381) when he was 21 years old. Now he is 38 years old. Not married. Kept in isolation as a jihadi by the Maryam Rajavi mojahedeen gang in Manza, Albania. His mother Sorayah wants to meet him. But Albanian authorities who obey to the Mojaheeden command do not allow her and hundreds of other Iranian mothers to come to Albania and see their sons.